Pope Benedict XVI: "Those Sacred Wounds..." are the source of Divine Mercy 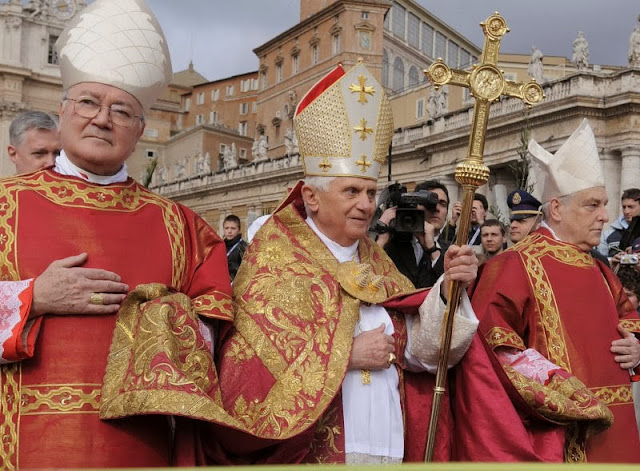 This Sunday the Gospel of John tells us that the Risen Jesus appeared to the disciples, enclosed in the Upper Room, on the evening of the "first day of the week" (Jn 20: 19), and that he showed himself to them once again in the same place "eight days later" (Jn 20: 26). From the beginning, therefore, the Christian community began to live a weekly rhythm, marked by the meeting with the Risen Lord.

This is something that the Constitution on the Liturgy of the Second Vatican Council also emphasizes, saying: "By a tradition handed down from the Apostles, which took its origin from the very day of Christ's Resurrection, the Church celebrates the Paschal Mystery every seventh day, which day is appropriately called the Lord's Day" (Sacrosanctum Concilium, n. 106).

The Evangelist further recalls that on the occasion of both his appearances - the day of the Resurrection and eight days later - the Lord Jesus showed the disciples the signs of the crucifixion, clearly visible and tangible even in his glorified Body (cf. Jn 20: 20, 27).

Those sacred wounds in his hands, in his feet and in his side, are an inexhaustible source of faith, hope and love from which each one can draw, especially the souls who thirst the most for divine mercy.

In consideration of this, the Servant of God John Paul II, highlighting the spiritual experience of a humble Sister, St Faustina Kowalska, desired that the Sunday after Easter be dedicated in a special way to Divine Mercy; and Providence disposed that he would die precisely on the eve of this day in the hands of Divine Mercy.


The mystery of God's merciful love was the centre of the Pontificate of my venerable Predecessor. Let us remember in particular his 1980 Encyclical Dives in Misericordia, and his dedication of the new Shrine of Divine Mercy in Krakow in 2002. The words he spoke on the latter occasion summed up, as it were, his Magisterium, pointing out that the cult of Divine Mercy is not a secondary devotion but an integral dimension of Christian faith and prayer.

May Mary Most Holy, Mother of the Church, whom we now address with the Regina Caeli, obtain for all Christians that they live Sunday to the full as "the Easter of the week", tasting the beauty of the encounter with the Risen Lord and drawing from the source of his merciful love to be apostles of his peace.
Posted by Barona at 08:45

Interesting how the sacred wounds are considered the source of Divine Mercy, yet the image of the Divine Mercy Jesus does not show any wounds.

See this article.
http://voxcantor.blogspot.com.au/2018/04/divine-mercy-image-and-theology-where.html
Divine Mercy image and theology? Where are His wounds?

Anonymous 2:48. Actually, both images do show wounds. There are innumerable "images" out there, that do not correspond to the original, nor the "votive" painting by Hyla (approved by Cardinal Sapiecha). I too have seen images of the Hyla painting with the nail wound in the right hand completely airbrushed out. The real question is: who is perverting the Divine Mercy, and why? We also need to look at the Novena to the Divine Mercy which has been "updated"; that is, the texts have been deliberately changed. The MIC fathers, for example, in the United States, have openly admitted that they have changed the texts because they are not in conformity to the ecumenical (so-called) stance taken at Vatican II. These priests claim that Sr. Faustyna would accept the changes of the Novena as _(allegedly) the Catholic Church no longer uses such words as "heretics" and "schismatics". Incredible, but true.