Pope Paul VI: "the faithful are behaving like infidels" 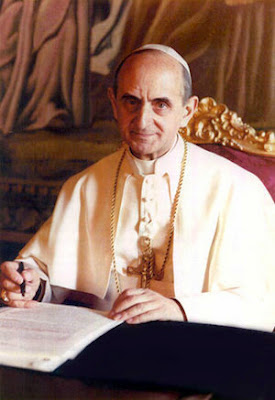 The erudite journalist, Sandro Magister carries an excellent review of a book on Blessed Paul VI, and the late pope's real opinions on the so-called liturgical "reforms" following the Second Vatican Council. The pope did not like the deceptive and false reforms. Magister gives a number of examples of Paul questioning the changes, in a manner as if he had no actual power. Very interesting.

Regarding the distribution of the Sacred Species on the hand, Pope Paul considered such an action as that on an "infidel", a non-believer.


On May 18, 1975, after noting more than once that during the distribution of communion, in the basilica or in Saint Peter’s Square, there were some who passed the consecrated host from hand to hand, Paul VI commented:

“The Eucharistic bread cannot be treated with such liberty! The faithful, in these cases, are behaving like.. infidels!”

We are confronted with the mystery as to how and why a Supreme Pontiff, opposing such abuse and "reforms", was stymied, obstructed and fluffed off by men who were literally hell-bent on corrupting the Faith. Scholarly research, such as this new book, will eventually reveal why the pope was paralyzed. I believe that it is too simplistic to say that Paul could have acted against them, but chose not to. We do not know all the machinations going on behind those Vatican Walls. We do know, as the Pope himself admitted publicly, the "smoke of Satan" had entered the Church.

One thing, we can do: we can heed the words of the late Holy Father and not act like an infidel, but approach Holy Communion reverently and receive - always - on the tongue.
Posted by Barona at 14:03

Rorate Caeli commented on this book yesterday or the day before, saying they don't buy the "hapless, helpless" Paul VI baloney. I agree with them.

There are many unanswered questions about Pope Paul VI's papacy and indeed about the man.

It is a crucial papacy because Paul VI had to deal with the fall-out (if I may use that term) of Vatican II and the 'Runaway Church'.
Not for nothing was he called the Hamlet of popes.
They say he walked the corridors of the Vatican at night, unable to sleep, haunted by the storms shaking the Church.
Rather like the indecisive Hamlet stalking the battlements of Elsinore!

In the 1980s, Dutch Catholic friends convinced me that the faith there was going to the dogs as G.K. Chesterton would have said.
The parlous state of Catholicism in Holland was a prelude to what was coming in the rest of Europe.
The book about the priesthood in the USA, 'Goodbye Good Men' was a wake-up call for liberal Catholics who had no idea of the extent of the corruption in seminaries.

We need a new scholarly biography of Paul VI.

Joseph Ratzinger disagreed with Hans Kung on many aspects of Vatican II.

The wisdom of ecumenicism is being questioned.
Henri de Lubac is still read even by those of us who consider ourselves anti-modernist and post-liberal.
But in those days we were too impressionable, and too ready to embrace new ideas uncritically.
And we did not want to be called reactionary or to be reminded of the anti-modernist oath that Pope Pius X required of all priests.
Ronald Knox said no one took the oath all that seriously.

But let me recommend a talk on YouTube which looks again at Paul VI's most controversial encyclical:

'The Prophetic Power of Humanae Vitae by Mary Eberstadt.'