Pope Francis: the question of Papal Heresy and the temptation to Schism 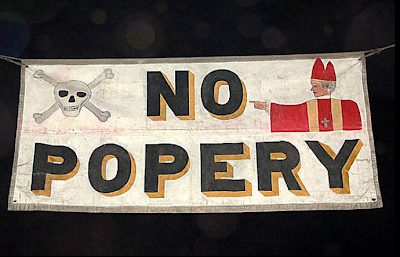 I have been warning readers of the temptation to schismatic dissidence for some time now. As the crisis in the Church increases, so too will the temptation to schism and heresy. I, for one, will not be leaving the Church, and wander off to some Synagogue of Satan. Nor do I intend to leave the Church in my heart. Do you realize, dear friend, what a grave mortal sin it is to deny that Pope Francis is Pope, yet attend a Mass that prays for him in the Canon, as Pope?

The Church is visible, is She not?

The Church is hierarchical, is She not?

The Church, though gravely ill, will not die. The Church needs Catholics by Her bedside, caring for Her, though Her injuries are heavy, grotesque; Her body covered with open sores. It is now, more than ever, that we should be caring lovingly for Our Mother.

The Church is sustained by Christ and Our Lord is far, far more powerful than popes, who come and go. Have we ever considered that God knows exactly what He is doing?

Now, there have been claims that Pope Francis cannot be "deposed", but rather, "lose his Office"! He would, according to this fantastical theory that tries to square a circle, remain Pope until his "heresy has become manifest" in this delusion.

Who will judge what is "manifest"?

From where will these self-appointed judges receive their authority?

This is a fine work of schism. If he has lost office, he can hardly be the Pope. Let us not quibble over semantics! What this is, is a mental exercise in denying the Pope in praxis, but not in theory.

I am no theologian. Therefore, I shall refer to a theologian: the Abbe de Nantes. The Abbe himself wrote once that a Catholic has a thousand reasons more to follow the Pope than the opinion of a priest. Therefore, in this humble opinion of this priest let us review the possibility that the "Church" (??) can declare the Supreme Pontiff, "deposed". The Abbe certainly was prescient in his belief that this will cause grave confusion.


" Papa hæreticus depositus est… A heretical Pope is deposed. ” This is the solution advocated by Robert Bellarmine in the heyday of the Counter-Reformation. “ Heresy being a form of spiritual death, a withdrawal from the Church, any Pope who should fall into heresy, would find himself ipso facto cut off from the Church. He is, by this very fact, deposed. He ceases to occupy the Apostolic See of his own accord. ” This theory was well adapted to an epoch when everyone clearly distinguished the Catholic Faith from error.
What neither Suarez nor Bellarmine could have foreseen, is that a time would come when evolutionism and subjectivism would spread such darkness in people’s minds that it would be impossible for them to immediately identify heresy, particularly in the private doctrines of a pope. Given the current confusion, in which Protestant private judgement is further complicated by Modernist immanentism, if we were to accept this solution, anyone might declare the Pope a heretic according to his own private whim and conclude that, as far as his own direction was concerned, there was no longer any pope. ” (CRC no. 30, March 1970, p. 7) Thus, the theologian of the Catholic Counter-Reformation was of the opinion that this solution would be impracticable as it would have no effect other than to cause confusion and lead to contesting any Pope whoever he might be.
“ Papa haereticus deponendus est, a heretical Pope must be deposed. ” This is the solution proposed by Cardinal Cajetan and other theologians. It implies two important consequences. “ If it so happens that a Pope is a heretic, he must be deposed for him to cease being the Pope. Furthermore, the person who accuses the Pope of heresy must not leave it at that, but must ask for the legal process for his deposition to be undertaken, since he cannot make a universally and immediately executory decision of his personal judgement. ” (CRC no. 69, June 1973, p. 10)
This is a wise solution, yet it raises further questions, in particular, who will judge the Pope  ? Cajetan’s answer is unsatisfactory. He maintains that in undertaking such a process of deposition of a heretical Pope, the Church is not in fact passing a verdict on the offender, but is merely bringing him to the attention of the Sovereign Judge Who is God Himself. “ It is hard to see just what Cajetan had in mind, ” Fr. de Nantes comments. “ He is in an obvious dilemma. We are left only with the idea that any ecclesiastical tribunal in such a trial would be competent merely to institute proceedings, but not to pass sentence. "
Posted by Barona at 14:30

Email ThisBlogThis!Share to TwitterShare to FacebookShare to Pinterest
Labels: Crisis in the Church, Pope Francis, Schism

St. Paul didn't ask anyone's permission to admonish St. Peter who received it in true humility. Man-made Canon Law is the problem - it never could conceive of a Catholic Pope ever betraying his calling to the Papal Office. The question now is - is PF a Catholic with the necessary formation to be elected to that office? Or is he a Peronist politician with no interest in preserving the Catholic faith but only using the power attached to that office?

Right now the Church cannot be said to be:
One.
Holy.
Apostolic.
Right now she is none of those things.
I do not know the answer to this problem.
There are no instructions for ridding our church of a destroyer pope.
As a Catholic I am not compelled to say something is not so, when it is, when the evidence of what I see and hear tells me it is. Then I must use my sense of spiritual discernment, to say what I believe to be the truth. I have no power to act, but I can what I believe.
He is a destroyer. He may be pope, but he is also a destroyer.
I do not know the answer, nor the remedy.
People must cling to Christ and the faith, or abandon both and cling to a destroyer and an empty shell.
I will cling to Christ and the faith.
God help us all.

APRIL 13, 2018
There is no apology or correction from Roberto dei Mattei and Christopher Ferrara for the books they wrote on Vatican Council II.They need to apologise for their ignorance, which was innocent
http://eucharistandmission.blogspot.it/2018/04/there-is-no-apology-or-correction-from.html

Please go to the Catholic Truth Scotland blog to support the discussion of the disgusting BBC video blaspheming the Holy Eucharist: https://catholictruthblog.com/2018/04/13/video-confirms-bbc-scotland-bigotry-but-bishop-keenan-misses-the-point/#comment-60300

Cling to Christ and His Bride, but don't leave them.

You are mistaken if you believe that cardinal Bergoglio is now a valid pope.
Even if his election in 2013 was valid [something many catholics now deem doubtful] his formally heretical statements and writings would mean not only has he lost the papal office but that he has also severed himself from the church.
Best wishes.
John Larkin

To try to remove Christ's Church from Her Christ given Authority to Judge is itself gravely suspect of heresy. Remember John, Christ gave the Keys to Peter and to the Apostles in union with him. He did not give the Keys to me or to you. Please re-read carefully the posts I have written containing the arguments by the Abbe de Nantes and Brother Andre. St. Augustine also wrote that evil bishops, may be outside the Church in their hearts, but they still have the authority. This is the Will of Christ. Stay with the Church; she is visible and our Mother!

I agree with you regarding Christ Ferrara. It is incredible that people take a civil lawyer as a "scholar" on matters of faith and morals. It is shocking that he was allowed to put his signature to the so-called "Correctio" sent to the Pope. Much as I do not like Massimo Faggioli, I am afraid that he was right: the vast majority of signers of that document were second and third raters. Many were not even theologians. Here, we have theology being dragged down to the level of "armchair quarterbacks".