The Temptation to Schism 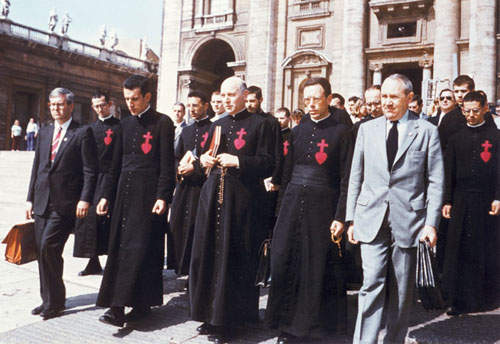 In 1969, the Abbe Georges de Nantes warned against the grave danger of the temptation to schism, as he had a number of times during the turbulence  during and following the Council. Since the Abbe's warning in 1969, the confusion, the errors, the heresies, the liberalism (modernist and integrist) has only increased in the Church. On the one hand, we have the modernists seeking to undermine and overthrow the doctrines of the Church; sadly, on the other hand we have schismatic integrists who seek to throw off the visible, hierarchical structure of the Church, emancipating themselves from Her authority and jurisdiction, but in the process establishing yet another sect which God does not recognize, nor honour.


“ May Catholic charity always triumph in our hearts  ! One does not answer schism by schism. In the face of ill-feeling, partiality and hatred which raise barriers and trenches, our only answer must be that of love, that love which is founded on the infrangible community of the sacramental life. The Church is the charity of Christ spread and communicated amongst all the brothers. Whilst our brothers maintain albeit only the appearance of belonging to the Church, we must hold and retain them in Catholic charity without accepting their ostracism and their scission, and without adding our own thereto. If we quit the community, if we emancipate ourselves from hierarchical authority and reject its jurisdiction, we reinforce the schism, we provide it with the homogeneous consistency of a sect, and we give it a free hand in the Church  ! We must stay put, resigned to being punished, to suffering and to obeying whatever is not forbidden or intolerable, as martyrs for Catholic Unity and Charity… We must reject everything that is commanded for the purpose of subversion and not let ourselves be penalised without protesting. But never, never ever, will we contest the unique inviolable power of jurisdiction that belongs to the Pope and to the bishops united to him. Even though they behave unjustly, it is they who are the Catholic hierarchy, not ourselves.

“ One cannot save the Church by building on other foundations. But some people wanted to persuade me to do just that. As someone unjustly (although legally) deprived of all power of jurisdiction over souls by a Pope and bishops suspected of schism and heresy, I was supposed to consider myself a victim of persecution and to attribute to myself some kind of extraordinary jurisdiction directly derived from God  ! The determining factor was meant to be the pressing necessity of souls who were in danger of perishing in a Church that had completely lost her direction. Well, my answer to this was  : never, not at any price. Such jurisdiction has never been recognised by the holy canons except in the case of bishops in countries where persecution has totally destroyed or paralysed the local hierarchy. Presuming on the assent of the Holy See, these bishops would exercise this kind of extraordinary jurisdiction to save these Churches from total ruin and to provide for the urgent necessities of souls (Dom Gréa, L’Église, p. 235-238). As none of this can be verified in my own case, the usurpation that is proposed to me would be invalid, criminal and strictly schismatic.

“ We are not the saviours of the Church. Rather it is she, both now and always, who is our salvation. I may not actually see this, but I believe it with an unwavering faith  : the salvation of the Church today, as yesterday and for all times, is to be found in her Pastors. Although temporarily sunk in the error and sectarianism of their Reform, this grace still subsists in them, indefectibly. It may not be apparent, but it is ready on the day appointed by God to spring forth again for the salvation of all. The disorder may be great, the damage to souls mortal, but God does not wish to govern us except through the hierarchy. In such a sacred matter He cannot tolerate any fraudulent usurpation. If we were foolish enough to imagine that we could save the Church by carrying her off with us into the escapade of yet another schism, we who are nothing, it is we and we alone who would be irremediably lost. The only life we have within us is that which we have received. It is from the Roman Rock alone that this life springs forth.

“ The Church does not lie within us. It subsists in those very men whom we see busying themselves in her ruin and whom we nevertheless believe, by virtue of their apostolic jurisdiction, to be the bearers of Christ’s grace. We ourselves have no share in their powers of order and ministry except in the exact extent to which they delegate it to us. Thus, I am recognised as having the power to celebrate the Holy Mass, and this would be the case even if I were to be punished by an unjust excommunication (which God forbid  !), provided that I then celebrate it in private and without the risk of scandal. I also retain the power to give absolution to those who are dying… I give thanks to the Church for these faculties which she allows me to keep. I make use of them and I will continue to do so. But to go beyond this would be to build a simulacrum of the Church outside the Church. Good heavens  ! What would be the point  ? To deceive myself into thinking that I could save everyone  ? Ah, no  ! When the schism of this Reform is over, I do not wish to be separated from the Church. ”
Posted by Barona at 11:50

Email ThisBlogThis!Share to TwitterShare to FacebookShare to Pinterest
Labels: Crisis in the Church, Pope Francis, Schism

APRIL 15, 2018
The interpretation of Paolo Pasqualucci, Romano Amerio and Msgr. Brunero Gherardini is irrational it can be seen in the text of the blog 1Peter5 : They misinterpreted hypothetical cases in Lumen Gentium, Unitatitis Redintegratio and Nostra Aetate as being objective people saved outside the Church.This was a mistake
http://eucharistandmission.blogspot.it/2018/04/the-interpretation-of-paolo-pasqualucci.html

I think this is one of the most selfish statements of clericalism I have ever read.
It rivals those wimp statements of the Dubia brothers.
All well and good for the cleric who can serve God by celebrating the Mass himself and for himself. But what about the poor traditional laity left far behind and ridiculed by the schismatic reformers?

This piece strikes me as one of the biggest examples of ingrained clericalism I have ever read. He can say Mass for himself but the hell with the laity?
Jesus made it clear t His Apostles that they were to be servants and not princes.
How has Catholicism run so far off the rails?
Obviously the Dubia brothers would never have had any effect on anything and they knew it.
As one man pointed out to me ,St Ahanasius was excommunicated. Later he became a Saint.
Furthermore the entire notion of Synods for the Youth is insane . The Word of God repeats throughout the Scriptures that Wisdom of the elders and parents is to be respected and followed not the inexperience immorality of the youth.
For almost every revolution of cultural change Youth were enlisted .Hitler Youth,Communist Youth etc.
Opus Dei's Cdl Sodano is the one who was behind JP2's World Youth Days and now Borgoglio is making sure the revolution continues.

There is much to reflect in the words of Abbe Georges de Nantes.
But the crisis today is far graver than the Abbe could have imagined.
Read online 'The Anti-Church has come' by Fr. Linus Clovis at Life Site.

The faithful can break openly with popes, bishops and rogue priests if they are preaching antichrist.
Indeed they must.
Allegiance to Jesus Christ comes before allegiance to the hierarchy.
If Rome is in error then members of the laity must and should speak out.
What's the old saying?
'The pope has spoken, the case rests. Christ has spoken, the pope rests.'

Fr. James Martin is in profound error; he is a rogue priest who belongs in an episode of that filthy drama 'Sex and the City'.
Martin is the alter-ego of Francis, who can't say openly that he approves of homosexual marriage, but believes that it will come in due course.

The 'Anti-Church' is only a short way from becoming the 'Church of Darkness' as Blessed Anne Catherine Emmerich saw in her vision.
'Then I saw an apparition of the Mother of God, and she said that the tribulation would be very great...They must pray for the Church of Darkness to leave Rome.'

So it's No to schism but Yes to those members of the laity like Michael Voris (the Vortex: YouTube) who are saying 'We want our Church back.'

Christianity is in rapid decline all over Europe, Canada and the USA.
Christians in Britain are being persecuted by the secular authorities, while Islam (much loved by the Left Wing) enjoys protected status.

Instead of waking up to the Wasteland of our post-Christian West, Francis and his faithless bishops are pushing ahead with their so-called 'reforms'.

Reforms which are not needed and which will do nothing... nothing at all to halt the erosion of faith in Jesus Christ.

So the roman catholic church now summed up:
One pope claims to have abdicated yet fails to do so correctly.
The other pope preaches heresy on a regular basis.
The cardinals stay silent waiting for both popes to die.
The bishops stay silent hoping to become cardinals.
The priests stay silent for fear of offending the bishops.
Vocations to the priesthood continue to dwindle seriously.
The laity drift off in their droves unable to comprehend whats going on and ceasing to care anymore.
Hard to blame then.
Signed John Larkin.