Jesus Christ is the King of the Jews 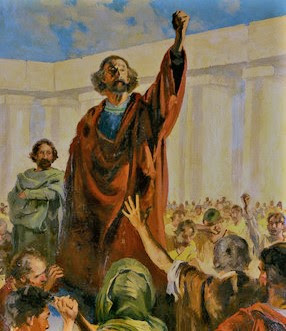 And Pilate wrote a title also, and he put it upon the cross.
And the writing was: JESUS OF NAZARETH, THE KING OF THE JEWS.
John 19:19

Any mention that contemporary Judaism is not biblical Judaism, but Talmudic Judaism, is met with immediate accusations of "antisemitism". Church Fathers, saints - up to and including St. Maximillian Kolbe - have all been smeared with "anti-semitism".  St. John and St. Paul have been singled out as two leading "antisemites".

To preach the Gospel to the Jews, that they convert from their current spritual blindness, evokes cries of "antisemitism", but it must be done. St. Peter (a Jew, and the first pope) preached Our Lord before a large crowd of Jews: the results were a mass conversion. According to contemporary relativistic thinking, where truth does not matter, where it does not matter if Jesus Christ is God or not God, where falsehood and error are irrelevant, St. Peter's preaching was a manifestation of "anti-semitism". In fact, since truth does not exist for the modern mind, St. Peter's preaching is incomprehensible. Is it any wonder why Our Lord's Crucifixion has become irrelevant? After all, if there is no truth, He died for nothing.

The conversion of the Jews should weigh especially heavily on our hearts and minds, during Easter Week, following their tragic rejection of Our Lord during Holy Week. Having been awaiting the Messiah, when He came, they not only "knew Him not", but rejected Him and arranged for the Romans to crucify Him. The High Priests and the vast majority of the Sanhedrin condemned Jesus and killed the Messiah. Not to preach Christ Crucified to the Jews is a grave evil. It is a direct act of disobedience to Our Lord, who commanded His Church to go "out to all Nations, teaching them all that I have commanded you".

Christiana Polonia carries an excellent article on the relationship between the Catholic Church and Rabinical Judaism.

The Church doesn’t come from rabbis but from Moses and the prophets. It is Catholicism that is a perfect continuation of the ancient Israelites’ faith.The beginnings of Judaism go back to the patriarch Abraham. At the beginning of the second millennium B.C. he wandered from Mesopotamia to Kanaan by the Mediterranean Sea. His descendants lived in Egypt though, where pharaohs reduced them to being slaves. Then, in the 13th century B.C. their 40-year-long journey back to Kanaan led by Moses began. It was then that God revealed the Decalogue on the Sinai Mountain to him. In the 10th century B.C. or so biblical Judaism concentrated around the Temple of Jerusalem holding the Ark of the Covenant was developed. Judaist prophets defended their monistic faith against going down to Paganism.

The destruction of the temple and the beginning of the Babylonian captivity in the 6th century B.C. led to the transformation of the religion which was now based mainly on the Law. In the 4th century B.C. Hellenistic Judaism was developed. Its followers performed their cult in the second rebuilt temple. When Jesus Christ was born some Jews recognised him as Messiah announced by Jewish prophets. Other Jews rejected Him. In the year 70 A.D. the Romans destroyed the second temple in Jerusalem. This was a turning point in the history of Judaism.

What could be done? The Torah experts, rabbis, gathered in the town of Yavne. They agreed on how they should function without a temple. So-called rabbinic Judaism was based on prayers in numerous synagogues rather than in one temple. The Talmud and the rabbis replaced religious animal sacrifice and priesthood. Between the 5th and 7th century Jews wrote the Talmud down. It consists of the Gemara, a rabbinic commentary on Mishnah (oral tradition codified around the year 200 A.D.) and Midrash, commentaries to the Torah.

As Reverend Waldemar Chrostowski pointed out, the centre of rabbinic Judaism is the Talmud and not the Old Testament. The Talmud plays the same role as the New Testament in Christianity. Moreover, as the reverend noted on some other occasion (“How to read the Holy Bible?” – a lecture from the “Spirituality for Warsaw" series, part 1 – 2017/2018 available on youtube.com), reading the Bible is different in the case of Christians and Jews. Christians read it in a Christological way. In the message of the Old Testament they see references to Christ.Thus, the New Testament complements the Old Testament. The rabbinic exegesis of the Bible leads to a different understanding of Messiah. It stops seeing an individual in Him. On the contrary, many contemporary rabbis consider the whole Israel to be Messiah. In this way Messiah becomes a collective entity.

Contemporary, meaning rabbinic, Jews follow (at least they should!) 613 commandments included in the Talmud. These are ethical and ceremonial indications (prayer three times a day, resting during the Sabbath), guidelines regarding the food (kosher) as well as holidays (Yom Kippur, Rosh Hashanah, Pesach, etc.).

The Catholic Church is younger than Judaism. No wonder. After all it comes from it (from biblical and not rabbinic Judaism!). It was founded on the Pentecost day in the 1st century when the Holy Spirit descended upon the Apostles. Soon afterwards, during the so-called Council of Jerusalem, the Apostles released Christians converted from Paganism from the obligation to follow the majority of regulations of the Law. Christianity started to separate itself as a religion different from Judaism. Other councils, such as the Council of Nicaea, when the Holy Trinity dogma was announced, contribute to that. A fundamental, although not indiscriminate, acceptance for the classic civilisation (Greco-Roman) is not without significance.

As can be seen, the Church and Judaism has the mutual heritage in common: the Old Testament (the Torah for Jews), monotheism as well as the esteem for Jewish prophets and law-makers. It is Abraham, Moses and the prophets as well as other people who are Catholics’ older brothers in faith. Moreover, since Christ is a Jew as concerning the flesh (Romans 9,5) the attempt to marry Christianity with antisemitism is not only a moral evil but also a logical contradiction. Moreover, as Reverend Waldemar Chrostowski pointed out during the “Opinion Leaders Academy” in 2014 (youtube.com), Catholicism (and Orthodox Church) continues the spirit of the Old Testament religion (priesthood, temple, sacrifice).

Meanwhile, some contemporary theologians, influenced by the so-called post-Auschwitz theology, mistakenly identify biblical Judaism with rabbinic Judaism. If, as they reason, both are “Judaism”, many are misled and consider them one religion. Meanwhile, the opposites are important. We should not underestimate them.

The first difference between Catholicism and rabbinic Judaism is the attitude towards Christ. According to the second religion, Jesus is a common man while the Church teaches that He is God, the second Person in the Holy Trinity. He is also Messiah promised by the prophets of the First Covenant who became human in order to redeem the world. Thus, Jews are still waiting for Messiah to come while the Church believes that it had already happened.

Moreover, while rabbinic Judaism is essentially limited to one nation, Christianity is universalistic. Therefore, any racism and national chauvinism (including antisemitism) argues with Christianism. As Saint Paul wrote: “For as many of you as were baptized into Christ did put on Christ. There can be neither Jew nor Greek, there can be neither bond nor free, there can be no male and female; for you all are one man in Christ Jesus.” (Ga 3;27-28). Although loyalty to the nation and the country is still valid (the fourth commandment), it is relativized. Love of one’s neighbour applies to everyone.

Read the full article here.
Posted by Barona at 09:47

This would be a good time to celebrate the life of Jean-Marie Lustiger (1926-2001) the Jewish-born former archbishop of Paris.
An outstanding man in every way, he made an enormous contribution to the Church.

He was from a Jewish-Polish background but grew up in France.

Jean-Marie was made a cardinal by Pope John Paul II in 1983.
His life was portrayed sensitively in the film 'The Jewish Cardinal' (2014) directed by Ilan Duran Cohen, now available as a DVD.
I saw the film in my native city of Glasgow, Scotland; the screening was sponsored by the Glasgow Jewish community and was very well attended.

You may also want to read 'Cardinal Jean-Marie Lustiger - On Christians and Jews'.
This book is a series of wise and insightful interviews with Cardinal Jean-Marie, selected by Jean Duchesne.
It covers such major issues as the Shoah, Israel, and Jewish-Christian relationships.
It was published by the Paulist Press in 2010.

Also worth reading is Cardinal Jean-Marie's own book, 'The Promise'.
It deals with a number of theological topics such as biblical prophecy and the Ten Commandments. It was published by William Eerdmans in 2007.

Thanks for this blog.