The following is a Formal Statement issued by the Catholic and Orthodox Churches in Syria, following the attack by the United States, the United Kingdom and France on Syria. 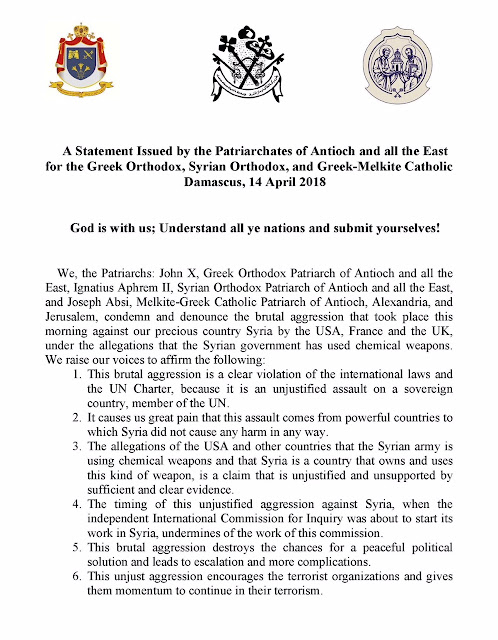 I advise Catholics and all men and women of good will to study and pray over this document. It is not "my country right or wrong". That idea is false and not Catholic. My mother was a British Patriot who loved her country. Had she been here, she too, as I do now, denounce the United Kingdom in the strongest possible terms for participating in this vile attack, as a pawn of international Zionism-Freemasonry, who are the real puppet masters in London, Washington and Paris.

The hatred, the rage that is being directed towards Russia needs to be explained. That nation has made many mistakes and is not perfect: but one thing is certain, the Orthodox Church is increasing in power and the Russian State is defending and advancing the Orthodox Church. The traditional enemies of Our Lord Jesus Christ hate this.

Let there be no mistake: Our Lord has real enemies who hate Him and wish to wipe His Name off the face of the earth and destroy His Church. Politics ultimately always comes down to religion. To believe the contrary is blindness and foolishness. Americans and Frenchmen and women: pray and decide.
Posted by Barona at 08:55