Roberto de Mattei: the objective of Jihad is the capture of Rome ~ "the sign of victory will be the taking of Rome... Europe will be captured..." 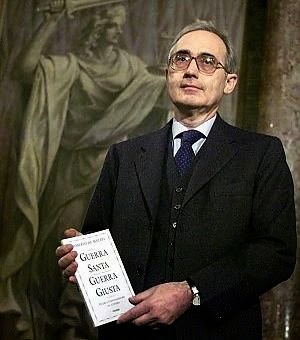 The upcoming print edition of Polonia Christiana (Nr.24) will carry the complete and extensive article by the Italian scholar and historian, Roberto de Mattei on the mortal threat that Islam and Jihad pose to the West. Demoralized and seduced by a vile moral relativism, that is quickly transitioning into totalitarianism - as exemplified in its glorification of abortion, and the persecution  of those who oppose it - apostate Europe and the West is imploding. I translate here highlights as published on the website of Polonia Christiana. The article could not have been published at a more auspicious moment, as Jihadi forces shake a degenerate France. The original Polish source is here.

The West can not win the coming war with increasingly densely woven radical jihadi international network, which turns towards the heart of Christian civilization - Rome. Why? Because it hates itself.

In the last few months, the West "discovered" the problem of the existence of Islam. Even the patriarch of radical progessivism, Eugenio Scalfari and the privileged partner of Pope Francis said that the western world is standing before a war of religion and opposing civilizations ("La Repubblica", August 24, 2014).

As in any war, so in this - the stronger will prevail. But as teach all great strategists, the  soldier's strength lies primarily in the psychological and moral attitude that is born of the legitimate love for a specific reason, as well as opposition towards the enemy. Today, the West is close to surrender because  its own identity is seen as the main enemy, and is accompanied by - this Western self-hatred - a love, or at least an acceptance of affirmation of the enemy, which presents itself as a liberator. Who does not remember the enthusiasm for the "Arab Spring" and reports of alleged conversion of Islam to democracy?

The dictatorships of Saddam or Gaddafi's were not replaced with systems that exalt freedom and human rights, but with chaos in which religious and political factions took the the place of the old despots. In North Africa and the Middle East, the Islamic State has brought bloody destruction and turmoil amongst clans and tribes of Sunnis and Shiites, Arabs and Kurds, and for which the the price is paid for above all by the Christians and Westerners.

From these tribal revolutions was born the Islamic State - an entity that, in contrast to Al-Qaeda, has a specific territory, has a real army and officials responsible for finance, and above all, has a specific and openly declared main objective: the restitution of the caliphate. If the word should claim to surprise one, or if one thinks that it is a rash, false, and pathological vision of Islam,  then such an opinion only shows a very scant knowledge of the religion of Muhammad. The World Caliphate is not a dream of only fundamentalists - is the goal of all of Islam.

Also tragic, and what an eloquent symbol of the defeat of the West, for which there was no sudden salvific help from Providence, is a picture of an American journalist James Foley kneeling beside the executioner just before beheading. It seems that Foley was a good Catholic, but his death was not that of a martyr. Before his execution he did not make a profession of faith, but uttered a type of apostasy - although not against religion, but against their own country and civilization (though most likely dictated by the kidnappers anyway).

"I wish I was an American. I turn to my friends, my family and my loved ones to rise up against my real murderer - the US government, because that's what happens to me is the sole result of its self-importance and criminal character.

This is reminiscent of notice of termination of the war sent by the Turks in 1683 to the emperor Leopold I of the  Habsburgs: We're going to strike your arms on the ground and crush them (...). Expect us in Vienna, where we will cut you, you insignificant nothings before God's creatures, which can only be giaur.*

The March on Rome

The ultimate goal of Islam is to conquer the capitol of Christianity/Christendom. As noted by Nicoletta Tiliacos, during his sermon at the beginning of Ramadan at a mosque in Mosul on Friday, July 4, of which the contents of the sermon were distributed throughout the world, Abu Bakr al Baghdadi al-Husseini al Qurashi - now the self-proclaimed caliph Ibrahim - calling on all Muslims to join him,  in the promise that Islam will  sweep into Rome and dominate the entire globe ("Il Foglio", July 21, 2014). Similar words were spoken by a few years earlier by Sheikh Yusuf al-Qaradawi, the spiritual leader of the Muslim Brotherhood, and the fatwa announced on February 27, 2005: despite the pessimism planted in our ranks, ultimately Islam will rule the world and be its master. The sign of victory will be the taking of  Rome, Europe will be captured - defeated, Islam will grow and become a force that controls the entire European continent.

Rome is still the heart of the world and remains the ultimate goal of those who hate Christian civilization. It is also the only source of a possible rebirth. Eugenio Scalfari is right - this is a religious war. But - as recalled Sister Lucy of the Mother of God -  on January 3, 1944, was urged her to write down the third secret of Fatima - that there is is only one God and one true religion. In my soul a quiet voice spoke, certifies Lucia, there is only one faith, one baptism, one Church: Holy, Catholic and Apostolic. In eternity, Heaven! This is Heaven, towards which we must ascend a plea for help in defending the one and only Faith Civilization.

So now I am an apostate for leaving the United States and refusing to fight for them? I am a traitor to my own country and civilization for daring to be critical of US policy and practice? This is extremely insulting.

The important question is: Why do you bear for cognomen, the name of a heathen god?

"St. Boniface" why do you shame the very name?