BREAKING: Mary Wagner remained silent before the Court for her bail hearing in Toronto today 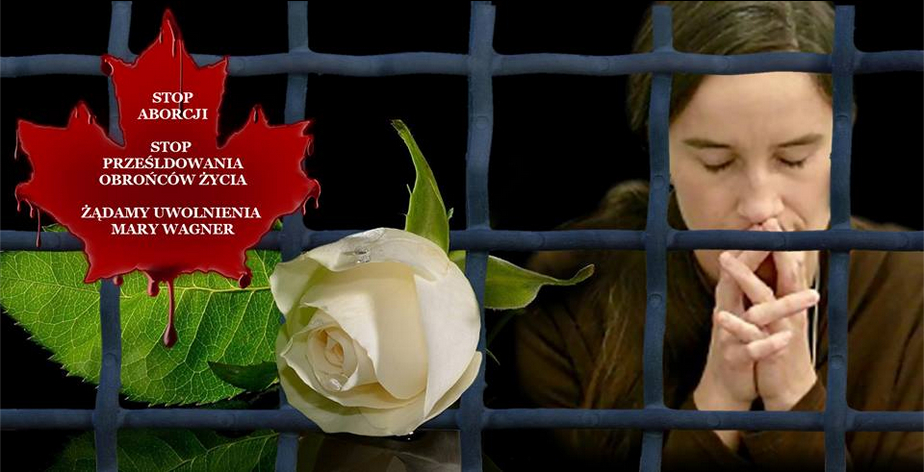 Our angel for life, Mary Wagner, adhering to Our Lord, His Mother, and her informed Catholic conscience,  before the power of the State and its evil "laws", remained silent in solidarity with the silent victims of abortion. This is headline news in Poland.

This Friday the 16th of January at 10 a.m in the College Park Courts in downtown Toronto, at the corner  of College and Yonge, a hearing was held for Mary Wagner held in custody to determine bail.

The accused stood before the court with eight people in attendance. Mary declined to receive legal assistance and  stated she would represent herself in court.

Her position was explained by the lawyer representing her previous case, Charles Lugosi. He cited the judgment and accusations from the previous case, to which Mary filed an appeal, and upon whose ruling he is still waiting. He considered the current charge as almost identical, and therefore that his client decided not to benefit from legal aid and to remain silent.

He asked the judge to permit Mary Wagner to read a letter to the court. The judge agreed despite the objections of the prosecutor, who also opposed the preliminary speech of Lugosi, claiming that this contravened procedural rules. Lugosi retorted that he knew law and has lectured on law for years, and that the request was unjust. The prosecutor was able to obtain that Mary's letter not be considered as evidence.

Mary read her message, which stated that she was arrested for what she did and will do: trying to save the innocent, those who have no voice  murder. She considers that the Canadian legal system has a hand in this crime, and therefore just as the victims are silent, she too will remain silent. After reading the letter Mary Wagner ceased to answer questions from the court.

At this point, the judge twice repeated how she would like to proceed. Receiving no reply, she turned to the prosecutor, and concluded that the preparation of the prosecution needs two to three weeks, so the date of the next hearing before the same court is scheduled for February 5, 2015.

After being shackled in handcuffs, Mary Wagner was led from the room with shouts of "God bless you Mary" from the public benches.

[Update: Lifesitenews carries a report, as well as news on the wonderful and extraordinary Linda Gibbons].
Posted by Barona at 18:09

Email ThisBlogThis!Share to TwitterShare to FacebookShare to Pinterest
Labels: Catholic Family Crisis, Crisis in the Church, Gospel of Life, The Persecuted Church

Mary Wagner is a woman of courage. She is a modern day hero in an age of cold-hearted murder of the unborn. May God bless her and keep her.
Patrick O'Connor,
Banff, Alberta

God Bless you Mary Wagner, you are a beautiful living saint for the unborn, I wish I could be as brave and strong as you are, you are very blessed.

Defend us in this day of battle,
Be our protection against the wickedness and snares of the devil.
May God rebuke him,
we humbly pray,
And do Thou,
O Prince of the Heavenly Host,
By the Divine Power of God,
Cast into hell satan and all the other evil spirits,
who prowl throughout the world seeking the ruin of souls.

The Lord God Almighty is the author of life, the one Who Is, the One Who Was and the One who will always be.
"I am" is the author of life, we are nothings, a blade of grass, challenging the author of the universe.
We need to stop being so blinded by our humaness - so frail knowing that we may not be here tomorrow and will
be standing in His heavenly court, being judged ourselves by the Omnipotent Judge. When will people
take account of what it is the Lord God has allowed to be placed in their hands? Just as He allowed Himself to be
subject to human hands in the form of His Son Jesus, so He is now allowing humans to make judgements - for His
Glorification. Do we not realize what it is that we are called to do???? "I am" is the author of life - not us.
Pray for mercy for our beloved country.