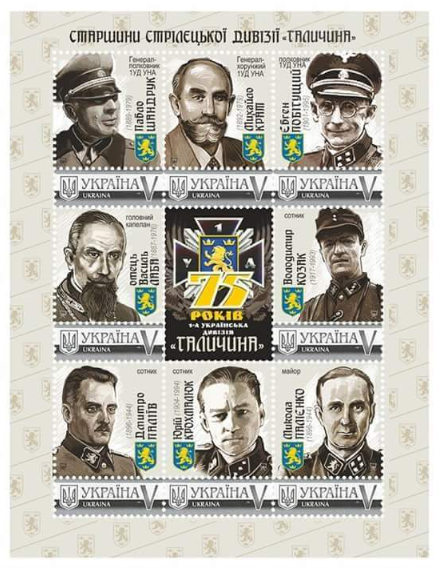 The Ukraine has issued commemorative stamps celebrating the 75th anniversary of the SS Galicia Division. This Nazi outfit distinguished itself during the Second World War for its sadistic brutality and violence. The SS Galicia Division was not the only Nazi Ukrainian organization. Prior to, and during the War, there were numerous fanatical, rabid nationalist and racist para-military and political groups. One of the worst was under the control of the vicious war criminal, Stepan Bandera. I have written about Bandera previously.

The most scandalous thing is the the complete silence about Ukrainian involvement in and ongoing glorification of Nazis. This must be explained. It is just not possible that people such as Senator John McCain, or Victoria Nudelman (CEO of the neocon warmongering, "Center for a New American Security") were unaware that Nazis were heavily involved in the Maidan revolt and overthrow of the legitimate Ukrainian government. During this era of "foreign meddling", who can forget McCain and Nudelman's active orchestrating and assisting the rebels against the legal government of the the Ukraine? It is even more sickening when one realizes that Nudelman is a Jewess, yet had no problem conspiring with neo-Nazis against Russia and the legitimate government of the Ukraine. Fascinating it is that Zionist interests in the West are constantly shouting from the roof tops about alleged Polish "anti-semitism", yet where it really exists, they are silent.

There were obvious - as there are today - geopolitical reasons for the actions of the neocon War Party that controls Washington. Moscow, rightly seeing her Black Sea Fleet under threat from NATO, moved quickly and efficiently to return Crimea to her rightful place within Russia. The occupation of the Black Sea by NATO would be but a major step forward in the dismemberment of Russia.

But it goes even deeper than this. Russia being in the Black Sea gives her influence and leverage in the Middle East. Washington and her Zionist Allies have been trying to remove Russia's sphere of influence for years. Washington and Tel Aviv have done everything they could to undermine the Syrian government. However, they have failed - for now - in Syria. Thus, we now hear the war drums beating anew in other parts of the Middle East for a possible war with Iran.
Posted by Barona at 04:30

I am really shocked by the unhinged antisemitism in this report. I am sorry to say but this puts into question the veracity of the whole site.

Thank you very much for your remark on Poland, as well as for the entire article, of course.
Bandera hated and killed Poles with a great passion. After in recent years we have opened our country to huge numbers of Ukrainians in search of a better life, many are urged (by someone and someone's money) to foment discontent and attack us relentlessly in response to our hospitality - all despite Bandera and a huge army of his worshipers today.

Is it now "un-hinged anti-semitism" to criticize the State of Israel? Where does this put the Arabs, as they are semites too? This smear is just cover to try to silence legitimate criticism of the innumerable war crimes and human rights violations committed by the State of Israel since the invasion of Palestine in 1947. I notice that you only engage in ad hominem attacks, rather than reply. Indeed Norman Finkelstein is right about the "holocaust industry". Finally, before you dare accuse me of "anti-semitism", let me tell you that my grandmother and father risked their lives feeding Jews during the War, so do not dare try to silence me from criticizing the criminal actions undertaken by Zionists in Palestine!!

Thank-you Dorota for your thoughtful and kind words. The reason behind hatred of Poland is obvious: she is Catholic. Thus she must be wiped out crushed, driven into the mud. Thus we saw the orchestrated explosion of hatred against Poland by a disproportionate number of Zionists, as we saw the other month the same Zionist hatred and rage when Poland passed her new law about the German Concentration camps. Nothing is more despicable and vile than the lies spread by Zionist fascists that Poles collaborated with the Nazis. I find it ironic that the Zionists treat and inflict cruelty on the occupied peoples in a manner that is reminiscent of Nazi occupation. We hear a lot about refugees" I ask when will we hear about the Palestinian refugees and when will they be allowed to return to their homeland, that was so viciously invaded by Zionist occupiers. The Jews lost any right to the land after they crucified Our Lord.

Did you actually read this, because your personal attack seems to be unhinged. I have read this post and only a brainwashed sheep of atheistic and anti-Catholic Zionism would make such a remark.
If you actually read other than sit like a zombie allowing your head to be filled with talking points then you wouldn’t embarrass yourself with your lack of knowledge on the subject . Just because you go along with your brother sheep and shout anti-semitism doesn’t make it so . You , Mr Sheep are the real problem. Zionists love those like you that do their dirty work.
I pray you are not Catholic . Which trigger word was it Mr. Sheep in thid article about vicious Nazis and facists who were called racist by this author set your mind off ? Oh that’s right McCains friend Nudelman called a Jewess? She is . It’s called a fact .
Maybe it’s s good idea to move on because this author has an extensive and articulate vocabulary which might make you “feel” uncomfortable as your lexicon seems to be limited to zionist sheep talk .
Barona has correctly identified you additionally as a neo-Nazi apologist . He was being kind .
Shame on you .