The Catholic Church against the scourge of Liberalism 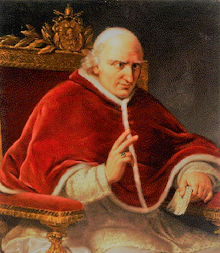 The holy Pope Pius VIII reigned less than one year, yet he left us a legacy of profound insight, and a prophetic glance into the future. Most Catholics, even those who call themselves "traditional", are liberals. If you still support "religious liberty", or "separation of Church and State", no matter how you cut it, you are a liberal and endangering your Faith. What you build up during the day, you tear down by night.

Catholics do NOT support "religious liberty", "separation of Church and State". Catholics work and pray for the day when the State is imbued with the Gospel, when the duly elected leaders (yes, even a "democracy" must have a King!!!), pay public homage to Our Lord Jesus Christ. This means that we have to proclaim to ALL - yes, all without exception - that Jesus Christ is the ONLY NAME under Heaven by which we are saved. This means that the State - EVERY State without EXCEPTION, must, if it is rightly ordered, honour Jesus Christ and acknowledge His Church, and not place it blasphemously on the same level as "heretical sects and Jewish perfidy" (Pius VII).

That means we have some serious work to do. We MUST proclaim Him to the Moslems, living in darkness, just as we MUST proclaim Him to the Jews who are in greater darkness than even the poor Moslems. For example, just the other day we saw the evil, Catholic-hating John Hagee, giving a "benediction" (in reality a demonic hymn to satanic - yes Satanic! - Zionism) on Monday, when that heretic did not even mention the Holy Name of JESUS before the unbelieving Jews. What a contrast between this sad man and St. Stephen who proclaimed Jesus before the Jews and suffered holy martyrdom!!!

To proclaim Him, we must live for Him and be examples of holiness. If we merely shout, rage, denounce, but NOT lead -FIRSTLY - holy lives, what we build will be on sand, and not only doomed to failure, but be vanquished by Satan into his false kingdom.

Humility, penance, prayer.... these are our weapons before any action!


Let us now, in the midst of near total ruin and corruption, take to heart the words of a holy Pope.

Among these heresies belongs that foul contrivance of the sophists of this age who do not admit any difference among the different professions of faith and who think that the portal of eternal salvation opens for all from any religion.


They, therefore, label with the stigma of levity and stupidity those who, having abandoned the religion which they learned, embrace another of any kind, even Catholicism. This is certainly a monstrous impiety which assigns the same praise and the mark of the just and upright man to truth and to error, to virtue and to vice, to goodness and to turpitude.

Indeed this deadly idea concerning the lack of difference among religions is refuted even by the light of natural reason. We are assured of this because the various religions do not often agree among themselves. If one is true, the other must be false; there can be no society of darkness with light. Against these experienced sophists the people must be taught that the profession of the Catholic faith is uniquely true, as the apostle proclaims: one Lord, one faith, one baptism.

Jerome used to say it this way: he who eats the lamb outside this house will perish as did those during the flood who were not with Noah in the ark. Indeed, no other name than the name of Jesus is given to men, by which they may be saved. He who believes shall be saved; he who does not believe shall be condemned.
Posted by Barona at 21:22