CARDINAL DOLAN SPEAKS: "Met Gala "can only be good for the Church" 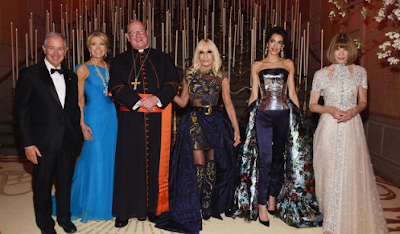 The Catholic Church - Christ's Mystical Body on earth - was violently assaulted the other night in New York City. The High Priest, Caiphas (Cardinal Dolan), and Herod (Stephen Schwarzman) - or, in Renaissance language, the corrupt nominal Christian Prince and his Jewish money lender - brought together a mob of Jews and Gentiles, sexual libertines and outright sexual perverts, to once again re-crucify Christ in His Mystical Body. Nothing ever changes.

The neo-modernist Crux, carries a report quoting Cardinal Dolan's approval of the blasphemous, licentious Met Gala from the other night. Can you imagine Sts. Peter or Paul getting together with powerful, wealthy Roman citizens to mock Christ and His Church for 30 pieces of silver? That is why we must prepare ourselves for a near total collapse of the institutional Church in Europe and North America. Be prepared.

However, as the Church collapses into twilight in the decadent and apostate "West", the Church is seeing a re-emergence in Africa and the Middle East, Her traditional lands. We have the bricks and mortar, they have the Faith. 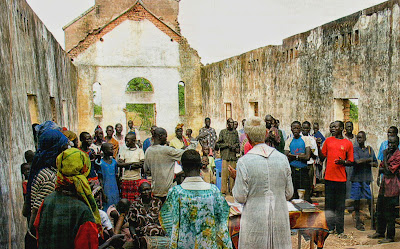 A number of years ago, the Chicago-born priest, Fr, John O'Connor reflected on whether or not we should give our money to these bishops or to Rome. Well, once again, Fr. O' Connor is proven the prophet.

I'm glad Father fingered +Pilarczyk as one of the "boy's club" (Cincinnati is now starting to recover from that enemy of Tradition) but I must disagree with him about the Vatican Art Collection. His suggestion to divest the entire collection and put it up for auction smacks of what Atila Guimaraes calls the Vatican II/Catacombs Pact theme of the "miserabilist" Church - i.e. a poor Church. Fits right in with Liberation Theology!

The Art Collection is one of the treasures of the Church, and it should be preserved for the edification of the faithful.

That said, Father's anger at all this corruption is plain, and justified - good thing he isn't around to see what Francis is doing...

'The Met Gala can only be good for the Church.'

Did the Cardinal really utter those base words?
Is he so sunk in spiritual darkness that he cannot see his own sin:
self-love and a carnal mind?

Does Dolan not have the manhood to admit that he made a monstrous mistake in giving the Met Gala the go ahead?
Is he not able to repent publicly in sackcloth and ashes, fasting and prayer? Begging God to forgive him?
Once the princes of the Church who had sinned repented in just this way.

What is Timothy Dolan even doing in the priesthood?
What is he doing as the Cardinal of New York City with the care of thousands of troubled souls in his hands?

On YouTube I watched:
'Did the Met Gala insult Catholicism?/ Good Morning Britain'.
Ruth Gledhill a journalist on The Tablet said of the Met Gala:
'The sacred was there if you wanted to look for it.'

What does Ms. Gledhill think 'the sacred' is?

A novelty item poking fun at the Incarnation?
A man made up for a fancy dress party, mocking Jesus?
A glittering gown to enhance the figure of a Vogue model or the ego of a foolish harlot who acted in 'Sex And the City'?

These worthless things are what John Bunyan called Vanity Fair.
Bunyan fled it as he fled the Slough of Despond and the Castle of Despair.

All that we can know of 'the sacred' Ms. Gledhill, is in the Passion, Death and Resurrection of Jesus of Nazareth.
'Christ came for the godless', yea even for those worthless buffoons at the Met Gala.

I'm not sure when this video was made, but things have certainly changed since that time, God rest this good priest's soul. He obviously did not know the Magisterium would go to blazes, and today, to be in agreement with the pope is to be on the side of apostasy and the devolution of the Church. So it's no longer a good idea for Catholics to give money based on either of those criteria, they are no longer valid.
The art "owned" by the Vatican belongs to the Catholic faithful. It cannot be sold. It is the history of Christendom, and to sell it, would surely mean the history of Christendom would disappear. What evil was done with the treasured sacred artifacts of our Church, with this blasphemous Met Gala. Those items were prayerfully made by loving hands, were blessed for their use, and if the makers had known they would be used in such a vulgar and scandalous way, they would have died of shock. But count on our church hierarchy to not only approve of such evil uses, but to champion and help it. These people were pawing through the Vatican sacristy, and that was explicitly made possible by men who see the Church as a way to live well, travel, and retire comfortably.