Never ending are the outrages and heresies coming from Vatican Radio. This blog reported on Philippa Hitchen interviewing pro-abortion, feminist "theologian" Tina Beattie. Earlier this year, Hitchen published an article interviewing "Rev" Mary Styles of the Church of England. In doing so,  Vatican Radio saw fit to accompany the article with this female dressed up in male clerical attire (pictured left)

The situation is simply: insane. Rome has gone insane. Spiritually mad. This is the result of religious indifferentism coming from  200 years of liberalism and 100 of modernism.

Now we have the insane farce of Vatican City  holding a "conference" for "professional women" in the workplace. So much for the poor, going out to peripheries. Poor women can't afford to come to Rome, to indulge in a week of feminist nonsense. Do not be fooled: a two day conference is really a full week. One must prepare, travel, attend and return home. Moreover, poor women cannot afford to hire nannies for a week, while they go off cavorting in Rome. Incredibly, the Pope of the Poor and Peripheries, Pope Francis, has even sent a congratulatory note to these "professional" women. Very strange. Why would the Pope who asks us to be concerned with the poor, the marginalized, the refugees have this sudden concern for wealthy, "professional" women and their feminist "gender" hang-ups and issues? What is behind all this? 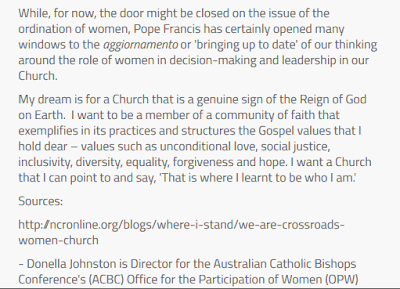 To top it all off, Vatican Radio's Philippa Hitchen saw fit to concentrate on Danella Johnston, asking her for her views and perspectives. What Hitchen will not tell us is that Johnston is a dissenter, a proponent of priestesses.

While, for now, the door might be closed on the issue of the ordination of women, Pope Francis has certainly opened many windows to the aggiornamento or 'bringing up to date' of our thinking around the role of women in decision-making and leadership in our Church.

My dream is for a Church that is a genuine sign of the Reign of God on Earth. I want to be a member of a community of faith that exemplifies in its practices and structures the Gospel values that I hold dear – values such as unconditional love, social justice, inclusivity, diversity, equality, forgiveness and hope. I want a Church that I can point to and say, 'That is where I learnt to be who I am".

Perhaps it has not crossed Johnston's mind that the Church is not about what "I want", it is about what Christ wants! But there you have it: not gossip or idle chatter, but the fact that Vatican Radio is once again promoting heresy and sin. Catholics are all too aware of the outrageous incidents of the promotion of homosexuality, including pornographic images of homosexual acts on Vatican Radio. One must wonder if these homosexualist articles were given the green light from a homosexual cleric or clerics? 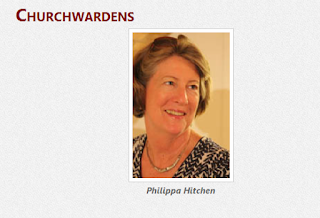 Who is this Hitchen; who hired Hitchen, who supports and defends her? A little digging discovers that Hitchen in none other than a "warden" at the heretical "All Saints" Anglican church in Rome. The same "church"   of the priestess in the above first photo. So there we have it: a heretic in the employ of Vatican Radio, interviewing dissidents, heretics - all under Pope Francis' nose. Your Holiness, one might ask: rather than attack Catholics who believe in "absolute truth", you might turn your attention to your radio station that spews out heresy!

In all of this one can only wonder how many heretical cardinals and bishops - not to mention middle management monsignori - infest Rome? We all learnt about the shocking Charamsa affair. How many Charamsa's are there in Rome? Not necessarily homosexuals, but evil, dissenting clerics who work at destroying the Church and living luxurious lifestyles on the backs of widows and orphans? With the vile poison being spewed out of Vatican Radio, one can only conclude that the dissenters are legion.
Posted by Barona at 21:19