2015: Thank-you dear friends and readers ~ what a year we have had!

2015 has impressed upon me the power of the Catholic blog. A great friend of this blog has told me on several occasions; I paraphrase: it is not only how many who read you, but who reads you. Very true. 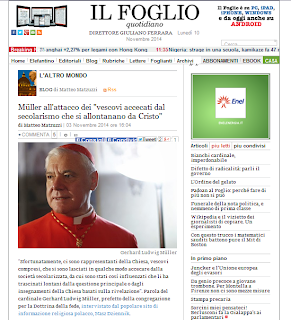 Toronto Catholic Witness is now reaching an international audience; not only in America, but also readers in Germany, Britain, and - very importantly - in Italy and inside the Holy See itself.  Though numbers are not everything, to attain nearly a quarter of a million readers in the last few months of the year shows that even a relatively small blog, such as this, dwarfs the reach of "official" diocesan Catholic media. The "official" Catholic media Establishment has become irrelevant from every perspective. It is a horse and buggy in the age of Formula One. From, for example,  the Catholic Register to Salt and Light, these cumbersome, expensive outfits have sunken into obscurity accompanied by the cheers of truly liberated Catholics. In Canada, the most prominent Catholic voice - Vox in Latin - is the outstanding blog, Vox Cantoris.

With the liberation that technology has provided, losing control over Catholics in the pew, the "official" Catholic media have become afraid of Catholic bloggers, even sliding into panic.  Fallen into an elephant trap of their own doing  - blinded by pride and arrogance - they soldier on uselessly promoting the latest fads and foolishness (not to mention neo-Modernism) desperate to try to seize the narrative back. But Catholics, awakening to the fact that something is terribly wrong in the Church, will no longer follow this false narrative that all is good, that Vatican II was the best thing since sliced bread, that we are undergoing a religious revival, that ecumenism is a wonderful thing, that Jews do not need to be evangelized, that the Pope is an automaton in the hands of God with every word uttered directly imbued into his mouth by the Holy Spirit etc., etc. With the advance of technology truly the pen is mightier than money. 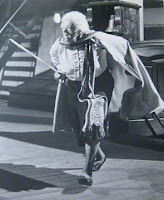 That lesson was learned by a prominent priest who threatened to sue a Catholic blogger earlier this year. Prominent priests - and for that matter prominent members of the hierarchy (many, sadly, heresiarchs) are having to learn to live with the new media, the new reality of the Catholic blog. Gone are the days of carefully managed and manipulated "official" Catholic newspapers, magazines and journals - funded by wealthy go-along-to-get-along Catholics - or the widows' mite; so skillfully extracted from well-meaning souls. Lightening quick, interconnected, efficient, not beholden to dark secrets or money - the blogger provides a service that people have prayed for for years. The pen is now the sword of truth!

Seductive compromise has been re-packaged by Satan to tempt people to believe they are doing good "when they are only being passive", leading to a "silent acquiescence to evil" (so wrote Bishop Fulton Sheen). We see this, for example,  in the massive failure of the pro-life movement, which has in many ways failed because it has refused to be a Gospel of Life movement. 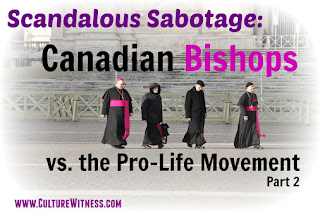 Abortion is up, contraception is up, fornication is up, euthanasia is on the march, homosexuality, pornography and sexual perversions are accepted and promoted. Most "Catholics" not only support contraception, but the abomination of gay "marriage". Where is the resistance to these issues of our time? No resistance, silent acquiescence to evil; this has become the decision of so many. Silence and passivity in the face of evil. It is the height of naivete to believe that "they" will leave us alone if "we" go into the proverbial closet. No, evil will hunt us down, and exterminate us. Evil fills the vacuum.

The most recent example is opposition to euthanasia. Starting from the Bishops of Canada and rotting from the head down, there has been no real opposition. A limp-wristed letter shot off to the government is supposed to cleanse the Bishops' moral obligation to actively lead opposition to this monstrous evil. Catholics are given the soft-shoe shuffle by the bishops into believing that they have done their duty, filed a protest and that we can all go back to  a feel-good worship service of one hour per week at the "eucharistic picnic" with the ubiquitous "Howdy folks, I'm Fr. Joe, put your money in the collection plate...". But active opposition could lead to loosing tax exemptions, fines, jail: now that would not be nice! That would mean making a real stand! Intolerable! Thus, Catholics have meekly accepted their new place in the house, the closet. The next place is the dog house, after that...the outhouse.


A blessed New Year to all!

Please keep especially in your prayers, Mary Wagner and Linda Gibbons who are fighting without compromise the ever growing culture of death. Finally, please pray for me. God bless you all, Our Lady keep you.
Posted by Barona at 13:29

Barona thank you for your faithful witness to the true faith. I have learned a lot from your blog. Keep fighting the good fight, God is on your side. Blessings to you and your loved ones for 2016

Blessings be unto you Barona. Your work during the Synod was incredible and of service to the Catholic world.

Barona, Great job this past year in keeping Catholics aware of the real news of the faith. Glad to have you in the blogosphere.