The Canadian Federation of Catholic Physicians: when will they truly stand up against euthanasia and stop compromising with evil?

I thank Mary Wagner for drawing my attention to the unacceptable and cowardly compromise of what is termed "The Proposal" at a website site called Moral Convictions. Just prior to her arrest Mary informed me about this website, its inadmissible position and fainthearted sellout on euthanasia.

This "Proposal" is a "project" of the Christian Medical and Dental Society, with the "support" of the Canadian Federation of Catholic Physicians (CFCP) and Canadian Physicians for Life. The "Proposal" that physicians are being encouraged to support, contains the following very disturbing argumentation which Mary and I contend is material cooperation with evil:

...if a patient chooses to pursue assisted death, the physician would advise that they or their representative could access the third party directly through mechanisms set up by the Department of Health and widely available to the public (e.g. phone number, website etc.). 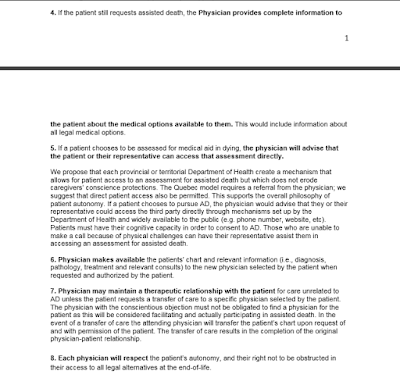 Readers will easily see that though deluding themselves into believing there is no assistance in euthanasia, the fact is, the "Proposal" is material assistance for the facilitation of intrinsic evil; it is facilitation and cooperation, all the while denying it. At the basis of this faulty reasoning is an ethical relativism that allows for autonomy of the person for intrinsic evil with the physician accepting de facto the complete freedom of choice of the person for evil, as decreed by the State which has set a false maximum freedom and autonomy of the person over and above objective moral norms as discovered in Natural Law and revealed through Revelation.

"...the eternal law of God is the sole standard and rule of human liberty, not only in each individual man, but also in the community and civil society which men constitute when united". Leo XIII, Libertas

What we have is the physician being split from the Christian and the Citizen leading to compromise with evil. Without realizing it, these physicians are following not so much Our Lord and His Church but the ever decaying philosophies of men like, Locke, Kant, Fitche and Hegel. History has not been kind with those who knew the truth but buried it in the ground. Mgr. Kaas and the Centre Party is the classic warning to us of what happens when you compromise with evil.


It is tragic, but completely  predictable, that the CFCP would be promoting a position that argues two and two is four, yet two and two is also five. Catholics have ceased to believe in truth. Or, they may believe in truth, but not strongly enough to act on it - which, in practice, means a useless, hypocritical nominal belief. Faith without good works is dead. Sometimes the truth means no longer drawing a very large physician's salary. Yes, it may mean persecution. Bishop Gregory Bittman of Edmonton is the Episcopal "advisor" of the CFCP. Is he aware of their support of the morally unacceptable "Proposal"?

Euthanasia will not be defeated with advising a patient about medical options that are intrinsically evil, or advising them to access it via a third party that is widely available to the public (is this preposterous statement supposed to excuse the Christian physician's material cooperation with intrinsic evil?) and pretending one's hands are not stained in blood?

What physicians are called to do is make a stand like Linda Gibbons and Mary Wagner. This compromise with evil will only enable the culture of death. Evil does not back down in the face of cowardly, half-hearted measures; it advances, consumes and destroys.

Let us review the teaching of St.Pope John Paul II from Evangelium Vitae on cooperation in evil acts.

Christians, like all people of good will, are called upon under grave obligation of conscience not to cooperate formally in practices which, even if permitted by civil legislation, are contrary to God's law. Indeed, from the moral standpoint, it is never licit to cooperate formally in evil. Such cooperation occurs when an action, either by its very nature or by the form it takes in a concrete situation, can be defined as a direct participation in an act against innocent human life or a sharing in the immoral intention of the person committing it. This cooperation can never be justified either by invoking respect for the freedom of others or by appealing to the fact that civil law permits it or requires it. Each individual in fact has moral responsibility for the acts which he personally performs; no one can be exempted from this responsibility, and on the basis of it everyone will be judged by God himself (cf. Rom 2:6; 14:12).

Email ThisBlogThis!Share to TwitterShare to FacebookShare to Pinterest
Labels: Euthanasia in Canada, Gospel of Life

To the best of my knowledge Alex Schadenberg has not weighed in on this "Proposal". Why not, I wonder? Perhaps because there's a tremendous pressure on doctors right now across the country and there are simply no good choices left. They see the AD train roaring down the tracks and they really don't know what to do, having been long abandoned through the silence of the moral leaders representing Christ, as well as His "moral theologians." There's an article in the Catholic Register located at http://www.catholicregister.org/item/21469-doctors-human-rights-violated-by-proposed-new-guidelines … and the last paragraph is relevant to your posting.
As with abortion, they have accepted the law of man and implicitly rejected the law of God.