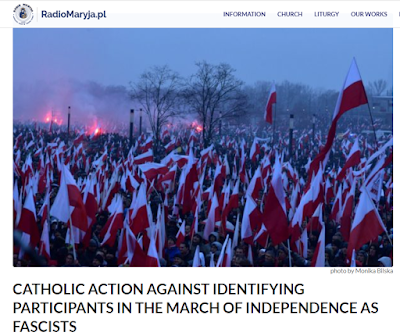 Smearing Poland and Poles as fascists. It is becoming clearer and clearer that the "western" media (controlled mostly by powerful international forces opposed to Christ and His Church, namely, Freemasonic and Zionist) is conducting a highly organized anti-Catholic and anti-Polish smear campaign.

CNN, the Guardian, Politico, the Independent, the Telegraph, the New York Times.... are but a smattering of the Masonic-Zionist controlled media that have Poland in their cross-hairs for destruction. The Crowning of Our Lord as King of Poland, the huge, Rosary Crusade have been game-changers for the Christ-hating elites.

A further report will explore so-called Catholics who are also attacking Poland as "anti-semitic" (though Arabs are semites too), and "xenophobic" (apparently, the Polish Home Army (AK) of World War Two is now delegated as such according to the communist newspaper, the Guardian). 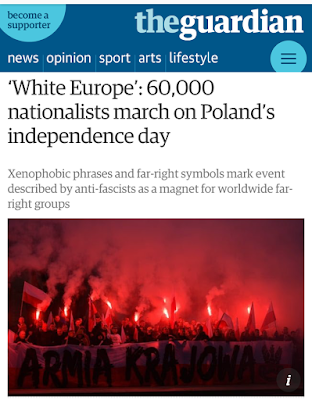 We now know, however, that the 50 or 60 individuals who were carrying placards such as "White Europe", etc. were provocations, imported by foreign agents to undermine Polish patriotism. What better way to terrorize Poles from being and displaying patriotism, if they can be smeared with the "fascist" and "Nazi" label? History is replete with infiltrators. The number of those who were chanting for "pure blood" were about 50-60 (this out of probably over 100,000 plus people).

However, according to the Zionist, rabid Catholic and Pole-hater, Jesse Lehrich, there were "60,000 Nazis". 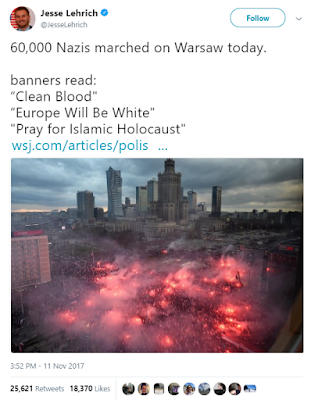 Not to be outdone, fellow Zionist, and Catholic-hating lesbian, Sally Kohn, claimed, "tens of thousands of neo- Nazis showed up...". 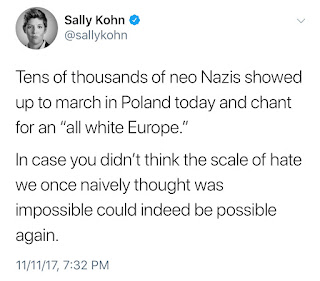 Sejm Parliamentary President Jarosław Kaczyński has stated that a few, completely unacceptable and marginal incidents were reported that were "very likely a provocation".

In other words, foreign agents (CIA, Mossad,etc.?) are working in Poland to undermine Polish Catholicism and patriotism to enslave that Nation under cosmopolitan globalism. We know the same players behind the "alt-right" movement, are also responsible for the "hard-left" groups. Flee anyone who refuses to bend the knee to Christ, His Church, and the Social Kingship of Christ. All these movements have their foundations in naturalism, in Freemasonry. "He who is not with me, is against me".

Radio Maryja, a major Catholic network in Poland, supported by many bishops (yet smeared by secularist Rafal Pankowski, because the network opposes Freemasonry, Judaism, Islam and other false and foreign religions and ideologies. Let us not forget that Pankowski considered it a "great honour" to be lauded by fanatical abortionist, homosexualist and traitor, Barack Obama. Tells us a lot about Pankowski, doesn't it?) carries a detailed report on the truth about the Independence Day March ("Great Patriot March"), and the abominable and hateful lies spread by journalists/writers who are predominately Jewish.

It is only just to ask these Jews why are they spreading lies, and why do they refuse to retract these lies, when exposed? Polish-Jewish relations are not going to be built on disseminating abroad falsehoods about Poland. Building good relations goes both ways. To not admit to hatred, anti-Polonism, and anti-Catholicism, will not build good relations. Poles have said explicitly that hatred of Jews as a people has no place in Poland.

President Duda has spoken out against injustices to Jews, it is high time that the leaders of the Jewish Nation call out and silence those anti-Catholic and anti-Polish bigots who serve the German Nazis by smearing Poles as collaborators and "fascists". How sad it would to be to see international Jewry conspiring with Germany against Poland to build a secular, atheist, anti-Christ German led EU hegemony over Europe. If my memory serves me correctly, this would not be too far off the ideal that Adolph Hitler had. A German dominated, Christ-less Europe.

Jews should call out The Guardian to put up a photo of the Armia Krajowa (AK) and claim that those very words are "xenophobic" and that the Polish Eagle the banner is a "far-right" symbol is either the act of the most incompetent Editor imaginable, or a deliberate, calculated lie. We know it is a calculated MONSTROUS LIE AND SMEAR. How can Jews remain silent and not defend the AK which fought the Nazi and Soviet horror?
Posted by Barona at 14:49

Zionism, Marxism & Freemasonry all combine together as Luciferians in their attempt to annihilate the One, Holy, Catholic & Apostolic Church of Christ on earth. They are, to our misfortune, supported by the present incumbent of the Papal Office & most of the Hierarchy who hold the same mindset. The crowning of Our Lord as King of Poland & the huge Rosary Crusade will have made them apoplectic which is good as it draws them out of their hidey-holes for everyone to gaze upon & denounce with vigour. Catholics must stand together to fight this evil & let it be known that any vile attack against Our Lord & His Blessed Mother will be regarded by all as a personal attack upon our faith & one which we will resist to our last breath. With Heaven's Army on our side & Our Lady having already crushed the head of the serpent we already have won the battle. We just must keep the faith & trust in God & Mary.