Poland: Catholic and Free must be Destroyed

What is the real reason for the recent explosion of hatred towards Poland?

Why this interest in Poland? Suddenly, voices are heard spewing the most vile hatred towards that Nation. What can it be? What is stimulating the hatred? The lies? 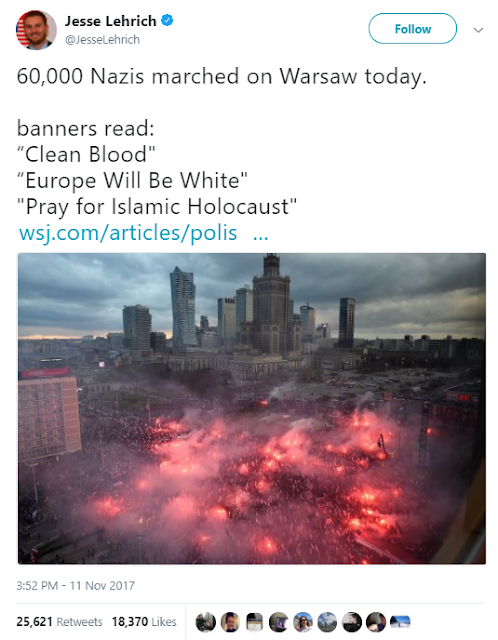 I am not naive. Poland has made her mistakes, and like every Nation, is not perfect. But she has - at least not yet - openly rejected Christ and the Mass. But Poland is on the cusp: abortion is legally not yet completely banned, divorce, contraception are legal. The Polish State does not yet have a grasp on Catholic Order. Until these three horrors are removed, Poland is still in very grave danger of falling into apostasy. 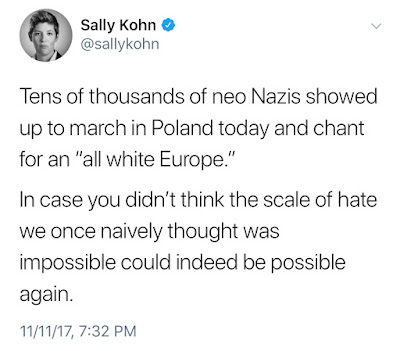 However, the recent crowning of Our Lord as King of Poland, the huge Rosary Crusade are signs that Catholic Poles are fighting back against decades of secularism. This is intolerable to the organized traditional, international enemies of Our Lord.

Just who are they?

The first international and highly organized group stems from the Pharisees of Our Lord's day. These men, given the once true religion, rejected their Messiah, crucified Him and have been bitter enemies of Him ever since. They are now, in the words of St. John, "the Synagogue of Satan". They hate Christ, His Church and seek at every opportunity to weaken and if possible, destroy the Church.

The second international and highly organized group stems from pagan Rome and flows through the various dissenting, esoteric groups of the Middle Ages, finally manifesting itself in Freemasonry. The central, core belief of Freemasonry is Man; this anthropocentric ideology professes religious indifference via religious liberty. In this they are encouraged and supported by the neo-Pharisees.

Both groups have worked tirelessly to de-Christianize the former Christian Nations. They have just about succeeded, with their de facto hijacking of the Catholic Church. They will not succeed of course, as Our Lord is also Lord of History. Nonetheless, these two, satanically inspired sects will stop at nothing in trying to prepare the world for the coming of the Man of Perdition, the Antichrist (who will be a Jew), and his right-hand-man, the False Prophet (who will be an apostate Catholic Bishop) in enslaving humanity under Lucifer. Now we begin to understand the hatred for any Nation that stands up to fight for Christ. She must be crushed. Traitors are never wanting. Once such group is the "Never Again" organization. A review of its ideology manifests its overt internationalism and masonic spirit. 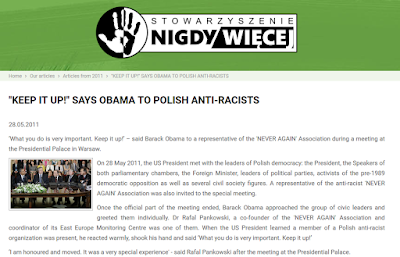 In my previous post, I reviewed the fact that the "Great Patriotic March" or Independence Day March in Warsaw of over 100,000 people was a peaceful march by patriots. Concluding the March, two veterans from the AK spoke to the assembled crowd about the dangers of "cosmopolitanism" and "globalism", and the siren call of money to seduce Poland into western secularism. Poles were admonished to be loyal and patriotic and to above all remember that Poland is a Catholic Nation, imbued with the Latin culture.

One can imagine the horror amongst those who despise Christ and His Church!

So here we are in 2017, with the same enemies of Our Lord Jesus Christ spewing the same hatred.
Posted by Barona at 14:50

The "same enemies" - you are correct. Increase the number of daily Rosaries for Poland and all those loyal to Christ and His Church.

Ethnically and culturally conscious Europeans make a big mistake using the vocabulary of our enemy, the underminer. Europeans must never use the word "white" because it is worse than meaningless, it is harmful. There are many "white" but non-European ethnicities and cultures, whose interests are inimical to ours.

"Europe for whites" can be used to undermine a perfectly rational wish to live in a teleologically harmonious society. "Europe for Europeans" demands that those who oppose it must explain why "Europe for everybody" is in any way just.

Poland's - as with any other people - is be Catholic. Any forms of naturalism will only lead to Poland's destruction. Obviously, the enemies of Our Lord will not rest, and will seek to infiltrate Catholic and Patriotic organizations to subvert Poland from being a Catholic nation, with Jesus Christ as her King. Even a "democracy" needs a King: the only king for any State is Christ. States that do not recognize Our Lord as King, are - objectively disordered.