Thomas Rosica CSB: Just what is his position on dissent? 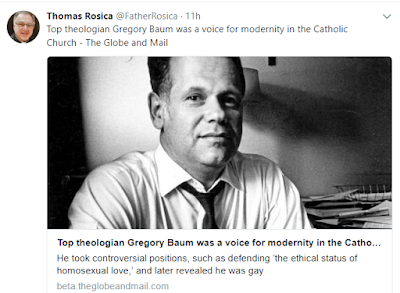 Thomas Rosica, CSB, CEO of the "establishment" (yet failing) Salt and Light Catholic Media network has recently been tweeting about "dissent". Very interesting, coming from a man who conducted a scandalous interview with the notorious arch-heretic, Gregory Baum. During that interview, Rosica did not once note Baum's heresies, nor question Baum on his heresies. Rosica ahs also been silent on Baum's heresies, following the heresiarch's death. 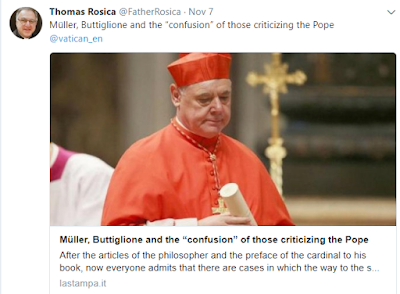 Did you, dear reader, have any idea that Thomas Rosica had any concern about dissent? Indeed, if Rosica had an interest in confronting dissent, would he have not confronted arch-heretic, ex-priest, and self-admitted  practicing homosexual, Gregory Baum? 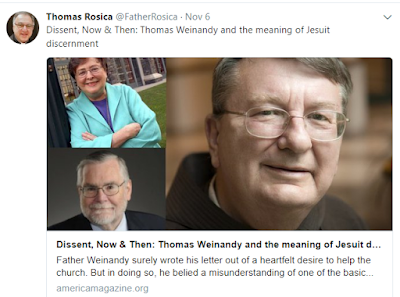 No clarification or response from Bishop Robert J.McManus or Brother Thomas Augustine MICM on Catholic doctrine : how did they interpret Vatican Council II and EENS?
The Slaves of the Immaculate have been recognized by the Catholic Church as a religious community with canonical status who follow the magisterium and can teach Catholic doctrine.But there is still no clarification on doctrine and theology from Brother Thomas Augustine MICM, Superior, St.Benedict Center, Still River, Massachusetts or the Chancellery Office at the Diocese of Worcester or Bishop Robert J. McManus, the bishop of Worcester.Posts on this blog have been e-mailed to them.

TEN QUESTIONS
Here are 10 questions I ask them to please clarify for Catholics.What is the doctrinal teaching of the Catholic Church and what has been accepted by the MICM community ? Can one interpret Vatican Council II in harmony with the strict interpretation of the dogma outside the Church there is no salvation?
For me the Congregation for the Doctrine of the Faith/Holy Office 1949 in the Letter of the Holy Office made a mistake. The Letter assumedinvisible for us baptism of desire(BOD), baptism, of blood(BOD) and being saved in invincible ignorance(I.I) are visible and known exceptions to Feeneyite EENS,these being examples of salvation outside the Church.I mentioned this in a previous blog post.1
So for me Fr.Leonard Feeney was correct and the Holy Office was irrational in its philosophy and new theology.Fr. Leonard Feeney was orthodox and the Holy Office was in heresy, with its visible examples of salvation of invisible people.
1) So my question is do the Slaves of the Immaculate Heart of Mary at the St. Benedict Center,Still River and Bishop Robert J.McManus interpret invisible for us BOD, BOB and I.I as referring to visible exceptions to EENS? Unknownpeople are known exceptions to EENS?
2) Do they acknowledge that BOD, BOB and I.I refer to unknown people in 2017? We cannot meet or see someone saved as such in 2017, would they agree ?
_____________________________

Fr. Rosica's position on dissent? Simple. Angling for a promotion.