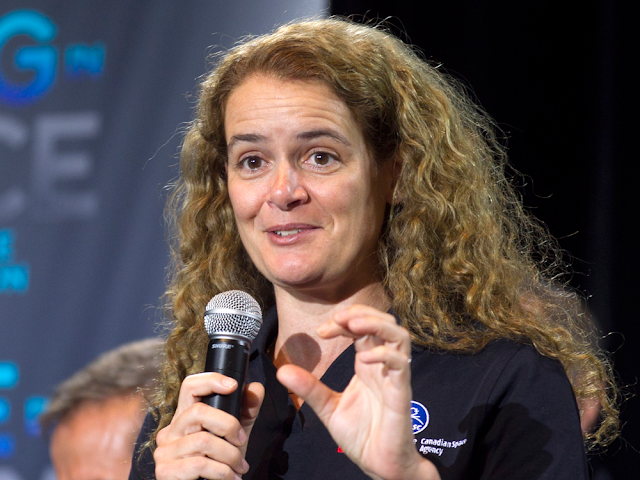 Julie Payette, Canada's virulently anti-Christian, so-called Governor General, and fascist in white gloves, has again opined about religion. This woman, who is not a scientist by any stretch of the imagination, attempts to speak of science, but, in reality, is a militant proponent of the ideology of scientism. Rex Murphy has an excellent article on Payette and her attempts at philosophizing.

Truth to tell, Payette is a serious embarrassment to true men of science. A search of electronic databases reveals that Payette has only one peer-reviewed article (co-authored) published. The article derives from her 1990 thesis. Hardly the track record of a scientist-scholar. Payette had one other article published - a very poorly written and unscholarly undergraduate level paper of four pages, including  references - in 1994.


Outside of her engineering degree, Julie Payette, as GG, has rapidly let Canadians know how actually poorly educated she is. She is not, alas for her, "learned" in any manner. What she manifests is a warped ideology that is very unoriginal.

Truth to tell, Julie Payette's warped ideology is nothing but a reflection of fascism. I very much doubt - given that she is so unread - that outside of the name, she has read any Mussolini. However, she should. She would see how her thinking reflects much of the tyrant's materialistic political philosophy.

Consider the following from Mussolini (extract from The Doctrine of Fascism, 1932):

...the Fascist conception of the State is all embracing; outside of it no human or spiritual values can exist, much less have value. Thus understood, Fascism, is totalitarian, and the - a synthesis and a unit inclusive of all values - interprets, develops, and potentates the whole life of a people...

... It wants to remake, not the forms of human life, but its content, man, character, faith. And to this end it requires discipline and authority that can enter into the spirits of men and there govern unopposed.... if liberalism spells individualism, Fascism spells government....the Fascist State is a will to power and to government. 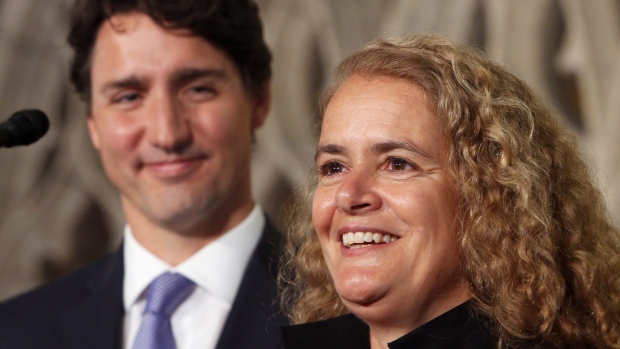 It is not that Julie Payette is technically unintelligent. Payette's problem is simple: she has lost her Catholic Faith. Without Our Lord, the mind turns to mush, to falsehood, to delusions, to fantasy. Julie Payette is a classic example of a Catholic gone wrong. Like Justin Trudeau, she supports abortion, homosexuality, etc.

The support of both those evils clearly reveal a mind that is not scientific. If the first case, science proves that the human zygote is precisely that - human. In the second case, science teaches that the the anus is not a receptacle for the reproductive organ.

For further information on the tragedy that is Julie Payette, read Vox Cantoris.
Posted by Barona at 13:20

You know, our emissions aren't nearly as bad as what's being touted, yet we apparently need a Minister for the Environment and Climate Change.

So, even if we reduce them to zero, we barely make a dent.

My sense is that the GG et al. is part of the "team" (which includes Mona Nemer) that has an express purpose in keeping the majority of Canadians believing we are ALL to blame for various problems in the world that probably are caused by the UN's agendas.

It's ridiculous to think that trillions of Wolbachia-infected Aedes has ZERO impact on some vertebrate species. This is like introducing a brand new species into our food chain. We didn't have this seven years ago.

"The different samples collected were meant to represent a full variety of species or "environment" in which Wolbachia could have disseminated. Samples comprised soil samples, plant leaves and roots, earthworms and millipedes, all collected from inside the enclosure." Source: http://www.scielo.br/scielo.php?script=sci_arttext&pid=S0074-02762010000800002

Shocking (to me) is they did not test: birds, bats, Culex mosquitoes, planktivorous fish and other aquatic species.

This is FAR more urgent than climate change.

And now, we have "major" studies that point to pollution causing 1 in 6 deaths.

Ottawa is spending $36.4M over 5 years on campaign about perils of legalized pot: http://www.cbc.ca/news/politics/ottawa-spending-millions-campaign-legal-cannabis-1.4380789 which I am sure will point to pot use as the cause of a 52% decline in sperm counts (in Western men).

WWF-Canada reported that aerial insectivores fell 51% and shorebird populations declined by 43% even as waterfowl and birds of prey increased. Source: http://www.cbc.ca/news/technology/wwf-living-planet-index-1.4288173