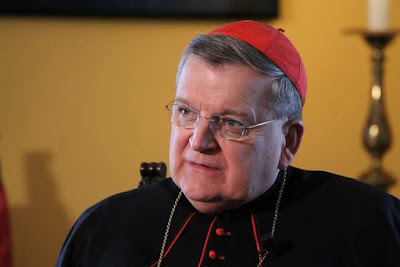 Raymond Cardinal Burke has been re-appointed to the Apostolic Signatura by Pope Francis today, September 30, 2017.

Cardinal Burke is a humble and holy man. He is an obedient man, who obeys his superiors if they do not command him to sin. That also includes the Pope.

One cannot dispute in an intelligent and logical manner with such people. They are imbued with a false sense of the Church and are, fundamentally in spirit, protestant.

Pray for Cardinal Burke. Pray for the Pope. Pray for the Church. Pray too, that you are not filled with hatred, bitterness, a loss of faith that Christ is in total control of His Church. Never forget that God writes straight with crooked lines!

A most Machiavellian move by the Peronist Pontiff.

Keep your friends close and your enemies closer.

...to say nothing of a slap in the face considering he was the Prefect!