The "Jesuit Post" continues its promotion of homosexuality: why?

This blog and Vox Cantoris have written, and will continue to write (when, alas, the situation arises) about the infiltration of the Church by militant homosexuals and assorted apologists.

In January of 2016, this blog and Vox Cantoris rang the alarm that Jason Welle, SJ., was scheduled to be ordained to the sacred priesthood. Welle, had been ordained the previous Fall to the diaconate, notwithstanding his support of homosexuality, and his blasphemous and profane Tweeting. Thankfully - for the present - Welle was not ordained. 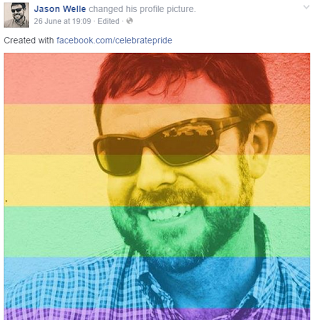 However, Welle, has returned to the issue of homosexuality, recently tweeting that he was subject to "a slanderous, homophobic attack online".

Tragic it is that The Jesuit Post continues its pro-homosexual line. One wonders why? 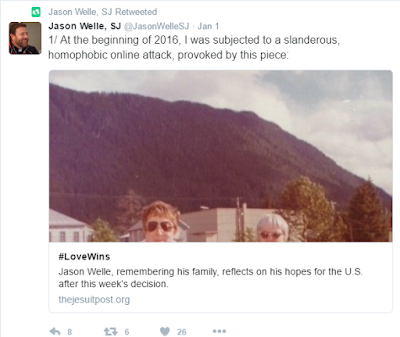 What could possibly motivate these Jesuits to post articles by "scholastics" that are absolutely contrary to the teaching of the Church on the grave sin of homosexual behaviour?

How is it possible that Jesuits continue to keep within their ranks individuals who openly support the abominable horror of homosexual "marriage"?

Just who are these people who run these "seminaries", where heresy and support of homosexual sin are excused and pandered to?

How heavily infiltrated are these seminaries with homosexuals? How is it that Jesuit Superiors do nothing?

How is it that the Roman authorities are doing nothing? Just how many militant homosexuals have infiltrated into the highest levels of the hierarchy and even into the Vatican itself?
Posted by Barona at 21:37

-Dawn
PS Do you somehow have contrary info? If so, please fill us in. Looks to me like he was ordained. Terrible.