BREAKING: Upcoming Vatican 2018 Synod on Youth to combat "rigidity" in the Church 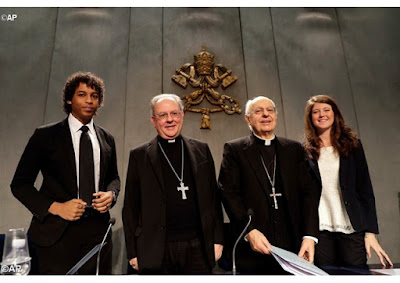 The ongoing war against doctrine coming from the churchmen in the Vatican (masquerading as fighting "rigidity"), will be ramped up in the upcoming 2018 Synod on Youth. This, according to Vatican Radio.

Readers will notice that the "professional" lives of "youth" is mentioned first. A totally natural approach for a false horizontal Christianity that no longer believes in Hell. The way to Heaven is on the Cross, not money, a so-called career and "professional" life.

Readers should note that Cardinal Lorenzo "Fingers" Baldisseri (the "book thief", and notorious piano player) is organizing this Synod, just as he organized the scandalous Synod of the Family.

In all of this we should remember that Christ is still in absolute control of His Church. We have the Pope and churchmen we need. WHat is it we need? We need to be punished severely for the grave sins of Catholics.

God writes straight with crooked lines. We should never forget that God is far, far greater than mere men, including Popes. No man, including a Pope can ever destroy the Church.

A Church which is less rigid, more welcoming, and open to discussions, debates and encounters. They want Church leaders who are willing to spend time listening to the experiences of young people, making them “privileged interlocutors” of a Church which is open and engaged in dialogue with the young generations.

That’s the ambitious goal at the heart of the next Synod of Bishops, focused on the choices that young people make in all walks of their professional, spiritual and personal lives.

The full report may be read here.
Posted by Barona at 05:30

Wouldn't it be rich if every "young person" invited complained about silly liturgy and said what they most need is clear, unambiguous teaching of the Truth from Church leaders?
Linda

First let emphasize that I love our Pope and pray for him everyday. At the same time I have been troubled by what has come out of the Vatican, especially ambiguous teaching on morals. I am saddened that some of our clerics equate the beautiful Tradition of the Church as "rigidity". Millions of young and older Catholics are hungry for clear and orderly teaching on Faith and Morals. We are do tired of of "innovations" that have led to a massive loss of Faith and has made our Catholicity anemic. We love the Traditions of our Church, especially in the Divine Liturgy that makes us see and experience the Holy Sacrifice of the Mass for what it is: Heaven on Earth, the Lamb's Supper. We long for the beauty and majesty of reverent and orderly liturgy. This is not "rigidity", it is authentic worship.

I love the Pope and pray for him everyday. At the same time I have been troubled by some of the ambiguous teaching that has come out of the Vatican. It saddens me that some of our Clerics seem to be equating the desire for Tradition as "rigidity". There are millions upon millions of young and older Catholics who hunger for clear moral teaching and upholding of Church Tradition, especially with regard to the Divine Liturgy. We are so tired of innovations that erode our Catholicity and make our evangelizing efforts anemic. At a time when the dictatorship of relativism has led to so much confusion and loss of Faith, we need solid moral teaching and reverent Liturgy. We do not want to make the Church so open that the faithful just drop out of it!

I think we'be had all of the "encounters" between these effeminate wolves and young people that we really need.

One need only look at Roisicas dying No rigidity on Birth Control Winnipeg statement, collapsing former RC faith in Canada. Single digits church weekly going down to single digits, Six percent in Canada . No Catholic schools or Hospitals in Newfoundland and Quebec. Any less Rigidity from Roisica and liberal prelates for youth in Canada and RC dying faith will be like Low Countries of Europe. Weekly church going there is down to one to five percent.