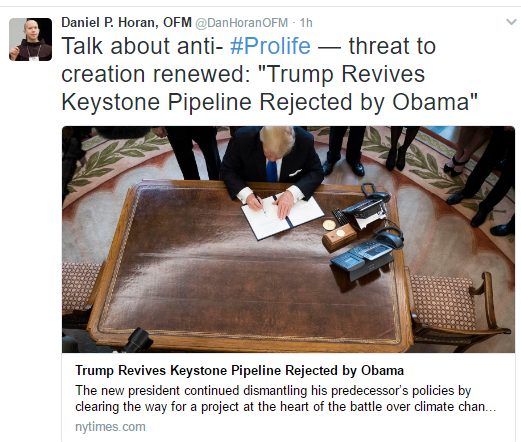 Daniel P. Horan has opined again. This time it was NOT that President Donald Trump reversed the evil abortion policy of his predecessor. On this Horan is SILENT.

What our erstwhile "Franciscan" dissenter has seen fit to denounce is the announcement that the Keystone XL Pipeline will be built.

Canadians, especially Albertans, are rejoicing that President Donald Trump has just approved the Keystone XL Pipeline. Americans right across the border in Montana are also rejoicing, as are those where the pipeline will be built.

It also means powerful pressure on Islamist regimes who hold their women in veritable bondage and servitude. I thought we were for "women's rights", Danny?

But this is of no concern to Daniel P Horan OFM. His only response is "talk about anti prolife".

No concern here for the poor and those on the peripheries for the Franciscan jogger, who runs in some very expensive equipment (more on that to come). Serious jogging and marathoning is definitely not for the poor.

To quote from his website: "Fr. Dan has continued to run for leisure and later returned to competition while in his 30s. Not an elite runner by any means, he nevertheless frequently qualifies for top-corral slots and even as a sub-elite runner in competitive road races".

Runners go through a lot of shoes, believe me. Not to mention the air fares to the various locations across the US and to Mexico City and Dublin.  It seems like Fr . "Dan" has some deep pockets, or he has some seriously misguided benefactors. 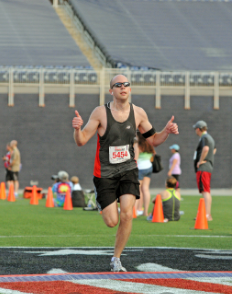 Daniel P. Horan expects to be taken seriously as a "theologian" when he dares compare the vicious, sadistic butchering of the unborn to the establishment of a safe pipeline. Madness. Absolute madness.

Daniel Horan is a disgrace to the priesthood. He is a Judas priest.
Posted by Barona at 21:44

I didn't think there could possibly be a worse priest than Fr. "CNN" Beck or James Martin, but this piece of garbage just might take the cake.

Here is tremendous uplifting news...in particular, in light of Father Horan's unfavorable view of the March For Life in Washington, D.C.

Washington D.C., Jan 27, 2017 / 12:00 pm (CNA/EWTN News).- Pope Francis offered his greeting to participants at the 2017 March for Life in Washington, D.C., assuring them of his prayers and imparting his Apostolic Blessing upon all present.

In a papal telegram from Vatican Secretary of State Cardinal Pietro Parolin, the Holy Father thanked the marchers for their witness to life.

“Pope Francis sends warm greetings and the assurance of his closeness in prayer to the many thousands of young people from throughout America gathered in the Archdiocese of Washington and the Diocese of Arlington for the annual March for Life,” the message said.

“His Holiness is profoundly grateful for this impressive testimony to the sacredness of every human life.”

The text of the telegram was included in a letter from Archbishop Christophe Pierre, apostolic nuncio to the United States, sent to Bishop Michael Burbidge of Arlington, Virginia.

The message quoted a passage from Pope Francis’ apostolic exhortation, Amoris Laetitia: “so great is the value of a human life, and so inalienable the right to life of an innocent child growing in the mother’s womb, that no alleged right…can justify a decision to terminate that life.”

Deo gratias for God having gifted us with His Holiness Pope Francis, a true defender and promoter of God's holy Culture of Life.

Deo gratias for Pope Francis' beautiful and uplifting blessing and support that he offered to March For Life participants.

Pope Francis' unwavering support for the Culture of Life should fill each pro-lifer with massive confidence and hope in knowing that the Vicar of Christ is on his/her side, in his/her corner, has his/her back.

Deo gratias for each pro-life marcher (and pro-life advocate everywhere).

Deo gratias for His Holiness Pope Francis, who defends "the sacredness of every human life."


P.S. I truly don't mean the following in nasty fashion...it's just a matter of reality:

In light of Pope Francis' having blessed, praised, and supported the March For Life participants, Father Horan's attitude toward the March Of Life has, beyond any doubt, been rendered meaningless.

The Church of Rome has recognized the holy and monumentally important work associated with the March of Life. To the Holy People of God, that trumps anything that Father Horan has said, in negative fashion, about the March For Life.