Fr. John Gallagher of the Diocese of Palm Beach, upon witnessing a homosexual pedophile priest grooming a young 14 year old boy with at least 40 pornographic photographs, immediately facilitated his arrest by Palm Beach police. Fr. Gallagher's quick thinking and decision making was crucial - as attested to by the police - to the successful prosecution and conviction of the homosexual molester.
One would think that Bishop Gerald Barbarito and  the Diocese of Palm Beach would be more than thankful towards Fr. Gallagher in saving a young innocent boy from suffering homosexual rape at the hands of this pervert. In fact, the police stated that the showing of the photos was   but a grooming phase, which would have led to physical abuse.  Fr. Gallagher, saved this young boy!

Alas, no. Fr. Gallagher's activities were considered anathema by Barbarito, whose unwritten policy would have been to spirit the abuser out of the diocese, in this case, back to his native India. Unfortunately, for Barbarito, he had met his match in the righteous Irish priest, who would not cover up homosexual criminal activities.

Furious that Fr. Gallagher had gone to the police, the Bishop launched a hateful attack upon him. He unleashed his minions in the Diocese to slander, defame and lie about the priest.

But it gets even worse. Far worse.

Deputy Sheriff of Palm Beach, Michael E. Gauger wrote a letter July 20th, 2015, to Sean Cardinal O'Malley asking him to ensure that Fr. Gallagher received accolades for his work in having the sodomite priest arrested charged and convicted. It seems obvious too, that the Deputy Sheriff was hoping that O'Malley would intervene with Barbarito, as the situation had turned ugly with Barbarito viciously persecuting the whistle-blowing priest. 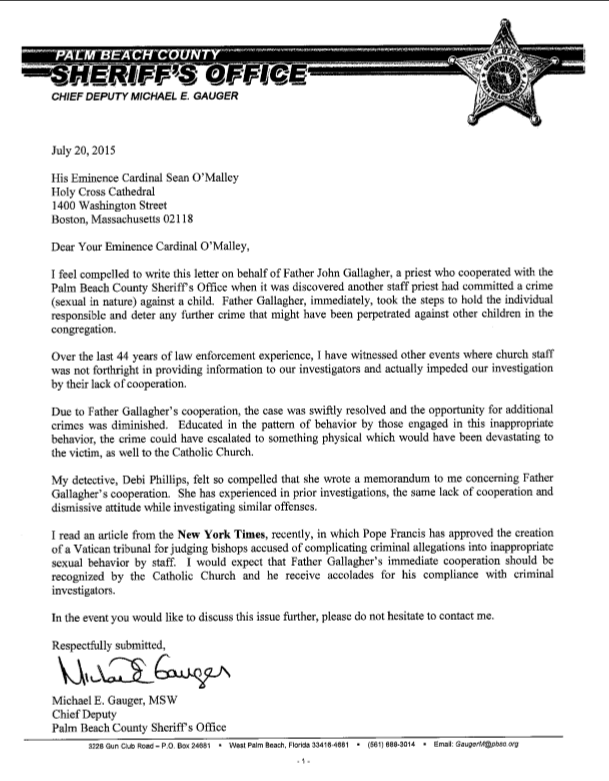 Very disturbingly, Sheriff Gauger notes that Catholic officials have been covering up criminal homosexual abuse for 44 years. In other words, since the Sheriff joined the police department, homosexuals have been loose in the diocese, abusing boys and young men.

Impeding and dismissive of abusing children!! This is how evil and vile these homosexual infiltrators are!

One can only wonder to the degree of homosexual activity amongst the clergy, beyond that of abusing boys. Obviously there exists a massive, highly organized and decades long homosexual ring in the Diocese of Palm Beach well before Sheriff Gauger.

I ask readers to note that the Deputy Sheriff wrote to O'Malley, as he was Ordinary in Palm Beach just over a decade ago. But O'Malley continues to give the cold shoulder to Fr Gallagher and Deputy Sheriff Gauger. Why? What is he covering up? Is he being back-mailed? Just what does Sean O'Malley know?

Why the silence? Just how high into the American Hierarchy does the homosexual juggernaut and blackmail go? Only to bishops? Or even higher? Catholics have a right to know.
Posted by Barona at 23:45

Email ThisBlogThis!Share to TwitterShare to FacebookShare to Pinterest
Labels: Bishops, Crisis in the Church

We all knew homosexuals were rife in the church. Given what we are seeing overall, the Protestantization of Liturgy in our local churches, the apostasy in Rome, their hostility toward the true faith, morals, the infiltration of sodomites, clearly, to the highest levels of the Vatican ("Tuchy" Fernandez, an archbishop, author of the book "Heal me with your Mouth" the Art of Kissing, being a ghost writer and pal of the pope, we probably must start to recognize that at some point, we are complicit in this homosexual ring, by our participation and support of this church.
I do not make that statement lightly, I am just saying, this situation cannot go on. I am embarrassed, greatly embarrassed, that police officials in Palm Beach, state outright RESISTANCE, to protecting boys and young men, from these sodomite priests and bishops. That, my friends, is likely the case across this nation, and it is as ugly a reality as anything else one can think of.
A POX on these sodomite destroyers! Curse them. They destroy boy's lives, corrupt them and harm them for life. Innocence, these insects, took advantage of innocence, and dragged it over barbed wire until it was no more. Boys who are sexually molested by priests, will not often be able to go on to normal relations, their very identity as a heterosexual has been damaged. What harm this does!! What vile memories they must carry for a lifetime! Now their faith is wrapped up in disordered sexual memories and thoughts, how terrible.
Have WE become complacent about this?? I really don't know anymore. I do not know the answer to that terrible question. What I do know is, I do not want to support this, in any way.

God, help these poor boys and young men, keep them safe from the wiles and evil plans of these sodomites, please rid your church of them quickly! Open the eyes of Catholics, to see what we must do.

Alas, no. Fr. Gallagher's activities were considered anathema by Barbarito, whose unwritten policy would have been to spirit the abuser out of the diocese, in this case, back to his native India

You, sir are acting with evil intent as can easily be seen by you attributing malign motives to Bishop Barbarito even though yesterday ABS sent you all the material necessary for you to stop this slanderous attack and you did not post any of it.

It is clear that in this case you can not think straight but, hopefully, you will soon come to your senses and repudiate this nasty attack on an orthodox Bishop whose praxis vis a vis perverted clergy is worthy of our pubic support.

Shame on you for what you are doing. This nasty attack is as mean-spirited as it is contrary to easily knowable facts.

Fior Heaven's sake, it was NOT FR Gallagher who was the whistle blower, it was the poor kid's family

Thank you for covering this issue and publishing this letter - also thanks to Fr. Gallagher. It is unspeakable that priests are persecuted by the sodomites that have taken over the Catholic priesthood while the faithful do nothing. Many lay people who work in the dioceses must know what is going on and yet they don't say anything either lest they lose their jobs. The obstruction appears to go straight to the top; not surprising since these sodomites promote their own.

And not just children are being assaultedL "Sources further point out uncanny coincidences between him and an unnamed "young cleric" newly featured in a January 14 article by the Irish Independent, who's accused of sexually assaulting a middle-aged man in 2015 on church property in Abp. Martin's diocese of Dublin."

Amateur, are you saying the detective is a liar? Why would he support Fr. Gallagher if the priest had nothing to do with the case? I'm not sure I'd trust any "proof" coming from the diocese if it's just he said/she said kinds of junk. What possible motive could the detective have for lying?