Veritatis Splendor or James Martin S. J.? How the Jesuits are pushing heresy on the Church using Amoris Laetitia as the battering ram 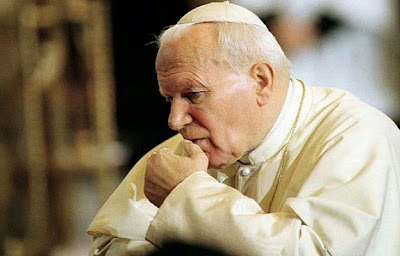 The "Celebrity" priest, James Martin S.J., writing in the dissident Jesuit periodical, America has a lot of things to say. In fact, James Martin,  within a day of the publication of the confusing Exhortation (we still DO NOT have a commitment - one way or the other - from the Pope regarding Familiaris Consortio), has moved the goal posts; distorting the already ambiguous words of the Pope to serve Martin's heretical agenda.

However, Francis must accept the blame for this. His responsibility is "si, si, no, no". A Pope is charged by Christ to feed the Sheep, and not be ambiguous, evasive. Bishop Robert Barron admits:

Will Amoris Laetitia end all debate on these matters? Hardly. But it does indeed represent a deft and impressive balancing of the many and often contradictory interventions at the two Synods on the Family. As such, it will be of great service to many suffering souls who come to the Field Hospital.

I can agree with the bishop on the former part of his statement, but not on the latter. We still do not know where the Pope stands on No. 84 of Familiaris Consortio. The Catholic Church is not about a "deft and impressive balancing" between truth and falsehood (how else can one describe "many and often contradictory interventions..."?). Pope Francis has merely kicked the ball a bit further down the road.

In all of this confusion, Catholics need to recall the words of Pope John Paul II from Veritatis Splendor:


56. In order to justify these positions, some authors have proposed a kind of double status of moral truth. Beyond the doctrinal and abstract level, one would have to acknowledge the priority of a certain more concrete existential consideration. The latter, by taking account of circumstances and the situation, could legitimately be the basis of certain exceptions to the general rule and thus permit one to do in practice and in good conscience what is qualified as intrinsically evil by the moral law. A separation, or even an opposition, is thus established in some cases between the teaching of the precept, which is valid in general, and the norm of the individual conscience, which would in fact make the final decision about what is good and what is evil. On this basis, an attempt is made to legitimize so-called "pastoral" solutions contrary to the teaching of the Magisterium, and to justify a "creative" hermeneutic according to which the moral conscience is in no way obliged, in every case, by a particular negative precept.

No one can fail to realize that these approaches pose a challenge to the very identity of the moral conscience in relation to human freedom and God's law. Only the clarification made earlier with regard to the relationship, based on truth, between freedom and law makes possible a discernment concerning this "creative" understanding of conscience.
Posted by Barona at 16:21