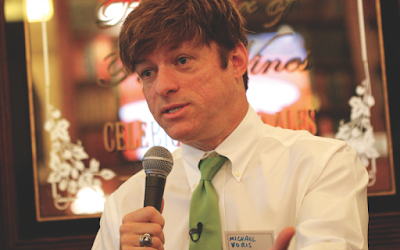 We are all sinners, we all have committed sins of which we are deeply ashamed. Indeed, even the smallest sin is one to have deep shame and sorrow for. "I would rather die than commit a sin" said little Dominic Savio. He meant it, soon the little boy would die a holy death, and, in time  be raised to the Altar.

I was recently speaking with a holy Carmelite nun. She interjected into our conversation that everyone is called to be a saint; her passion was evident. "Everyone has the potential to be a saint"! , she said. Those words have stayed with me. I now recall them as I write about Michael Voris.

By the grace of God, working through Michael's mother, Michael threw off his sinful past life and became a new man. I believe there is a tradition in the eastern church of bowing towards the penitent as they come out of confession, purified in the Blood of the Lamb. God does not have a "memory", sadly, we do. We have a personal memory about our sins - it is driven by a doubt that God's forgiving love could be that good - yes, it is! We are also driven by what would others think. The real question is: what does Our Lord Jesus Christ think. The considerations of sinful men are of no importance.

Our Lord Jesus Christ, being true God and true Man, did not have these weaknesses. Our Lord was an incredible lover of sinners. Indeed, that is why He came to the lost House of Israel. When it became evident to the Pharisees and the Scribes, in their racial pride and hatred, that Our Lord was also going to graft the Gentiles onto the Tree of Life, they killed Him. "It is better that one man should die, then the nation perish". This tragic hatred permeates the Talmud, making the Jewish Nation one to be deeply pitied and prayed for. Ultimately, their killing of Our Lord was a rejection of His Merciful Love. May the Jewish nation comes to see whom they crucified through the hands of sinful men.

But there was a tiny remnant of Jews who did believe and follow Our Lord. The Gospels record many acts of forgiveness by Our Lord towards repentant sinners: the woman caught in adultery is one of the greatest examples. It is also symbolic of the eventual abolishment of the Old Covenant and the establishment of the New.

Finally, nailed to the Cross, in the most horrible agony imaginable, Our Lord spoke words of forgiveness and salvation to St. Dismus. He was showing the Power of the Cross! Our Lord then enacted another great act of Mercy: he gave His Mother to His disciple, and His disciple to His Mother. The Cross is all about Mercy.

To whom did Our Lord first appear following his Resurrection? His Mother, the Apostles? No, to a former prostitute, St. Mary Magdalen. Does this not show Our Lord's Love? In a certain sense, Mary became the first catechist, when she ran to Peter and proclaimed: "I have seen the Lord". Yes she first "saw" the Lord when His incredible love forgave her her sins.

I shall pray for Michael Voris. The past does not matter, what matters is the future. Every saint had a past. Every sinner has a future.

Please also pray for me, for I am a sinner and in need of your prayers.
Posted by Barona at 09:11

Not to be a nit picker....but Mary Magdalena was never mentioned, in any way, as being a prostitute. She was, to be sure, a follower and supporter of Christ. That is all that can be gotten out of the Bible.