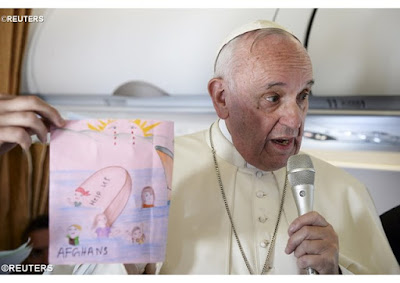 The Pope held an inflight press conference from Lesbos to Rome, and we are getting conflicting reports as to what he said. An alleged full version is available here. I say alleged, because we have a different version from the Vatican Radio.

This morning when I was leaving Senator Sanders was there. He had come to participate in the ‘Centesimus Annus’ Conference and greeted me politely together with his wife (…) It is called ‘manners’ and has nothing to do with politics” he said.

However, Crux gives us this version of the papal plane "presser":

This morning as I was leaving, Senator Sanders was there,” Francis said. “He knew I was coming out at that time, and he had the kindness to greet me.”

“When I came down, he introduced himself, I greeted him with a handshake, and nothing more,” the pope added. “It’s common courtesy, this is called common courtesy.

“If someone thinks that greeting someone is getting involved in politics,” he said, “I recommend that they find a psychiatrist".

Crux (and others) claim the Holy Father referenced mental health issues for those who questioned the possibility that Mr. Bernie Sanders' meeting with him could be open to political manipulation. Vatican Radio emphatically has a period after "politics", no reference to a psychiatrist.

Just who is telling the truth? Vatican Radio, or the various secular news outlets? Are we going to discover - once again - that Vatican Radio (just like the Holy See Press Office) is guilty of - and not for the first time - misleading information?