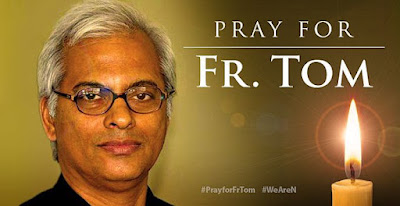 The CBCI Delegation met the Hon’ble Minister for External Affairs, Smt. Sushma Swaraj, at her Office this evening and discussed all matters related to the release of Fr. Tom Uzhunnalil, a Salesian Priest, abducted by the suspected IS Militants from Aden, Yemen, on March 4, 2016.

The CBCI Delegation expressed the deep concern and distress of the Catholic Church in India over the fate of Fr. Tom, whose whereabouts are yet not known, even after 29 days of that sad incident. The Delegation firmly requested the Hon’ble Minister to throw some light on the mystery involving the abduction and the truth regarding the present state of Fr. Tom Uzhunnalil, SDB, especially now, when wild rumours are being spread at home and abroad about the fate of Fr. Tom.

Ms. Sushma Swaraj has categorically assured the delegation that Fr. Tom Uzhunnalil is safe and that the Government is adopting all possible means for the quick and safe release of Fr. Tom. The Honorable Minister further said that the details of the negotiations and the technicalities involved with the negotiations cannot be divulged now, as it would endanger the process of release itself. Ms. Sushma Swaraj also shared with the delegation the strenuous effort taken by the External Affairs Ministry, and personally by her to procure a safe passage for Sr. Rema, the only surviving nun, from the terrorist attack in Yemen. The Honorable Minister also said that the wild rumors being spread about any harm done to Fr. Tom, are totally baseless.

The members of the Delegation expressed the sincere gratitude of the whole Church in India for the various steps taken by the Government of India and, in particular, the Hon’ble Minister for External Affairs, to trace and rescue Fr. Tom Uzhunnalil from the abductors.

The Delegation consisted of the CBCI Deputy Secretary General, Monsignor Joseph Chinnayyan; CBCI Spokesperson, Fr. Gyanprakash Topno; CARITAS India Executive Director, Fr. Frederick D’Souza; CBCI Secretary for Education, Fr. Joseph Manipadam, SDB; and the Secretary for CBCI Legal Matters, Advocate Jose Abraham. The Delegation handed over to Smt. Sushma Swaraj the same Letter, which was earlier handed over to the Senior Officials of the External Affairs Ministry, as the Hon’ble Minister was not in Delhi on those days.

(sent to this blog by journalist Benwen Lopez who is based in the Middle East).
Posted by Barona at 13:16

God Be praised and thank you to all who worked towards this especially the Indian, Oman and Vatican officials.Salesian congregation is specially blessed so are the Parishioners of the Syro Malabar church at St Augustine's church Ramapuram Kerala India.