The Pope is not Mohommed: A Magisterium in crisis ~ every word out of the Pope's mouth does not come from the Holy Spirit 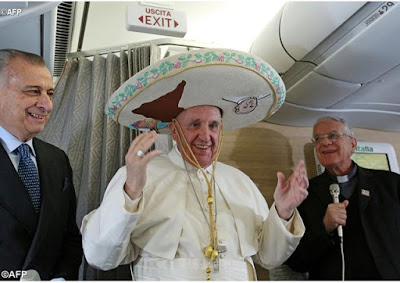 The main reasons for this idol worship of a mere man - this papolatry - is that in past decades the Church was blessed with a number of extraordinarily holy popes while at the same time as there was a growth in mass media.

Catholics suddenly heard from, could see their Holy Father. This was and is a good thing, but it carries certain dangers. It is natural that Catholics revere the successor of Peter, to owe him a filial obedience, love and respect. However, such loyalty, without proper catechesis and a check on emotions (driven and exacerbated by a celebrity-crazed culture of which Catholics are not immune as evidenced by crazed youth at World Youth Day junkets) a Catholic can quickly fall into idolatry and error. 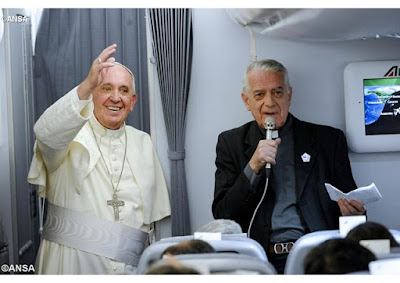 A Pope speaking, musing like a parish priest before the entire world is not a good thing. Especially since many believe that his every word is from the Holy Spirit. That the Pope is some cassocked version of Mohommed.

This attitude has led to a crisis in the Magisterium. Most Catholics forget that the Pope is the Guardian of Faith and Morals as handed down by Tradition. The Providential genius of Vatican I, in its declaration of Papal Infallibility, was to actually put severe restrictions on the words and actions of a Pope. A few decades later we would see heretics overturning 2000 years of morality by taking up contraception: the the Pope, the most powerful man in Christendom was and is powerless to take contraception up. He is powerless for he is a servant of Jesus Christ (while the others serve the world, the flesh and the devil).

Unless speaking ex cathedra to the whole Church and making it plain is was doing so, the words and actions of a Pope are not part of the Magisterium per se; unless they repeat what was already and everywhere taught. 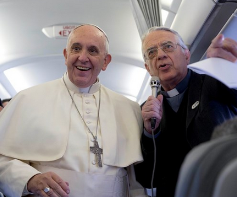 Are, for example Pope Francis' improvised daily homilies magisterial in any way? Are his in-flight verbal meanderings? Absolutely not.

Yet, we have celebrity priests using them to further their personal agendas. This is disgraceful. The few Catholics, who state that what the Pope says at daily Mass and in-flight carry no authority and should not be worried about, are missing the point. The Pope's improvised remarks carry a veneer of incredible authority because of the papolatrist culture. To say that what the Pope said about contraception and the Congolese nuns is nonsense or unimportant is gravely erroneous. What he said was incredibly important, because most Catholics believe it to carry magisterial authority, and will shout down those who say it does not with cries of "disobedience", and being "against" the Pope.

Yet all of this is plainly contradicted by Sacred Scripture, by the Councils and by Popes themselves. A Pope can err like the next man, and as history has shown, does. Evil men have been elected to the Throne of Peter. Evil men on the Throne of Peter have also damaged the Church.

Unlike Mohommed- whom Moslems believe to be Allah's "prophet" and law giver; a man to whom the Koran was dictated (every word) to by this higher "Power" - the Pope is not a pawn in the hands of a higher Power, to whom God "dictates" or inspires every word. To believe this of the Pope is heresy. Yet, sadly, I have heard good and devout priests say about Popes: "don't worry, the Holy Spirit is leading..."

It is time for there to be true loyalty to the Church, to the Magisterium - by the Pope and on down to the all the Faithful. The post-flight statements and behaviour by Federico Lombardi S.J. following the disaster of the in-flight press conference are beyond disgusting and disgraceful. Fr. Lombardi continues to perpetuate the LIE about Paul VI supporting contraception. Sandro Magister carries an excellent article about the errors and deceptions of Lombardi. Ed Peters, likewise,  has an excellent article on John Allen Jr's completely erroneous understanding of the papal Magisterium (this article being eagerly re-tweeted by celebrity priests).

The Pope is not Mohommed, he is not some idol, some god who makes up truth and falsehood as he goes along.

He too, must work out his salvation in "fear and trembling".
Posted by Barona at 10:12

Well said. This is what we should be hearing from our pulpits and our chanceries. Nothing but silence...avoidance big time.

We believe the pope is Christ's vicar on earth. It follows therefore that if the pope is not actually on the earth, then nothing he says has any magisterial authority whatsoever. Whatever the pope says while he is airborne is of no consequence whatsoever.

This is a special corollary to Freyr's First Rule for determining the authority of church documents and announcements. Look for the signature at the bottom. No signature... no authority.