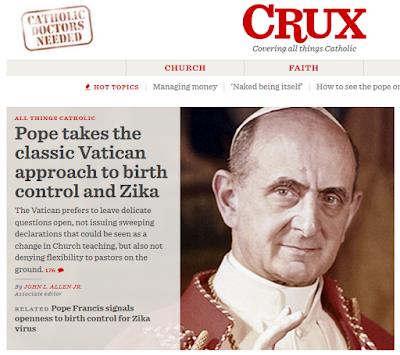 Not to be outdone by the arch-modernist Jesuit publication, "America, the "religious" arm of the Boston Globe continues to perpetuate the LIE that Pope Paul VI approved contraception for nuns in the late 1950s and early 1960s. I wrote against "America" and its promotion of the big LIE regarding Pope Paul VI. Today, I shall concentrate on the shameful journalism (in reality propaganda) coming from Crux. On February 18th, Crux published an article claiming that the late Pope Paul had given permission for nuns to use contraceptives in the Congo.  Ines San Martin wrote:

When it was exposed that this is a LIE - here and here, Crux had to find new kindling to build its fire and John Allen Jr. has trotted this out:

" Francis said Paul VI “permitted” birth control in that context, which, to Anglo-Saxon ears, implies a formal juridical act. The line sparked a frenzy of fruitless Internet searches, as people went looking for a Vatican edict or decree that just doesn’t exist.
Here’s what happened: In December 1961, the influential Italian journal Studi Cattolici (“Catholic Studies”) published an issue in which three Catholic moral theologians agreed that in the Congo case, contraception could be justified.

The future Paul VI, at that stage, was still the Archbishop of Milan, and close to the currents that shaped Studi Cattolici. It was assumed the conclusions reflected his thinking. That appeared to be confirmed later when Paul VI made one of the authors, Pietro Palazzini, a cardinal.


Is this it?  Is this the argument? If so, why not trot it out on the 18th? But let us examine this "argument".  When did innuendo become papal Magisterium?  Catholic moral theology is clear cut: one cannot do evil that good may come of it. Contraception is, in every circumstance intrinsically evil.

It is historically wrong: Pope Paul elevated Raymond Hunthasen to archbishop in 1975 - is Allen implying the Pope did so because of Hunthasuen's heresies? John Paul -sadly - elevated many a dissenter to the Cardinalate; that in no way implied his support of their heresies (e.g. Carter, Mahoney, Martini, Kasper...).

It is rascist. Why speak of "Anglo-Saxons" in this derogatory manner? In point of fact, this scandal is all over the internet in many languages. For example, the Polish media are carrying it. Will Allen Jr. now start complaining about the "Slavs" as having juridical hang-ups?
What we have is a big LIE being spread by Crux.

It is time they stopped, and it is time that celebrity priests: such as James Martin S.J., Edward Beck C.P., and Thomas Rosica, CSB stopped supporting this deceptive propaganda and nonsense coming from Crux and America.

Why are you falling for this? The Pope holds an impromptu press conference... the press asks leading questions... the media feeding frenzy starts... bloggers react in anger and outrage.
MEDIA IS DRIVING THE CONVERSATION!!!
You only end up talking about what the media wants you to. They are not interested in Jesus Christ, the gospel or the cross. It is precisely those things you are tasked with proclaiming.

For I decided to know nothing among you except Jesus Christ and him crucified.

Spoken like a disinformation agent. You cannot deny Francis words.

That is an ad hominem remark.