St. Pope John Paul II: the use of contraception is always intrinsically evil ~ it DOES NOT permit exceptions 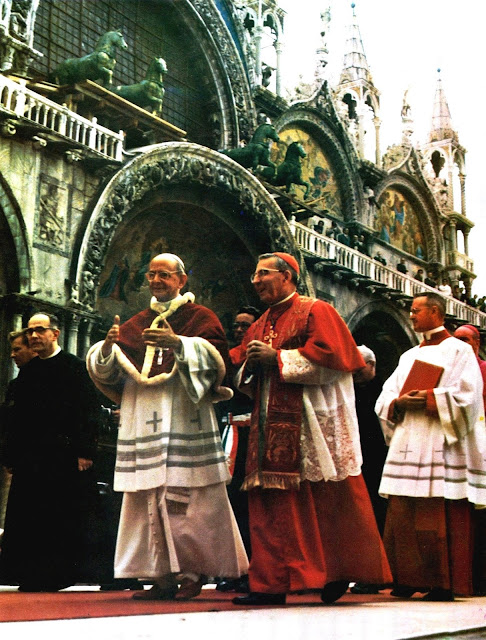 Contrary to the twitterati, no door can be opened to an action that is always and everywhere intrinsically evil.

Can a woman use contraceptives to avoid - e.g. the dangers of the Zika virus?
Contrary to the zealous twitterati, seemingly eager to bring birth control in, the Church has a different answer. It is a firm:NO.

Contraception is intrinsically evil, and no one may do evil that good may come of it. There are no exceptions.

Recent weeks have witnessed critical and sometimes harsh observations on conjugal morality as this is taught by the Magisterium of the Church and in particular by the Encyclical Humanae Vitae of Paul VI.

Doubts have been raised about interpretations of this teaching judged excessively rigid and intransigent, and grave fears have been expressed that, if the Church continues to teach and urge the moral norm of Humanae Vitae in keeping with such interpretations, she may lose credibility and attention with the critical person of today and with a large number of the faithful.

The mass media, for their part, have not been silent; they have echoed the doubts and fears of some theologians, often with undue simplification and mistaken interpretations, producing much confusion among the faithful.

In general, these doubts and fears are raised by considering first of all those couples who find difficulty in observing the moral norm regarding responsible procreation, that is to say, they are raised in terms of a sensitivity and concern which are meant to be pastoral. But one also finds reference to more specifically doctrinal questions, such as, for example, the interpretation of certain elements of tradition the claim that it is impossible to provide a biblical foundation of some particular moral norms (like the norm which prohibits contraception), recourse to a more definitely theological way of posing the moral question (“teleological” in the sense of a weighing of the consequences), and stressing the rights of personal conscience vis-à-vis the teaching of the Magisterium. Such objections are sometimes formulated without the scientific rigour which should distinguish serious theological reflection. Occasionally they take the form of personal attacks of a rancorous and disconcerting kind.

1. Certainly, every couple in difficulty merits great respect and love, especially when it is the various circumstances of life, not only personal but also economic and social, which make it difficult to fulfil moral duty.

The Church, for her part, as Teacher and Mother, is called to draw inspiration from the attitude of her Lord, from whom she receives the gift of pastoral love; this is an attitude full of love, of understanding, of patience and of mercy, while at the same time it is clear and strong in announcing and proposing the truth and the moral norm whose observance is a necessary condition of a life that is truly and fully human, and for the journey of holiness to which we are all called.

The Gospels bear witness to the fact that truth and mercy unite to form the single and undivided attitude of the Lord Jesus. His pastoral attitude is revealed in an outstandingly clear and typical example in the word which Jesus addresses to the woman who was a sinner: “Has no one condemned you?... Neither do I condemn you, go, and do not sin again” (Jn 8:10-11). Calling good and evil by their right names, Jesus does not falsify moral truth, but bears witness to it in an unmistakable way, and in offering his merciful love to the woman who had sinned and repented, he leads her back to the truth and to salvation.

Thus love and pastoral concern towards couples in difficulty can never (if one means to offer them real help) be separated from the truth, and can never evade or dilute the duty of calling good and evil by their right names. As was well said by Paul VI in his Encyclical, “it is an outstanding manifestation of charity towards souls to omit nothing from the saving doctrine of Christ” (Humanae Vitae, n 29).

The duty of calling good and evil by their right names in the area of responsible procreation was carried out by Paul VI with a most faithful love for Christ and for souls, particularly in his Encyclical Humanae Vitae. The Holy Father John Paul II has fulfilled the same duty, and continues to fulfil it, in full keeping with the Second Vatican Council and with the Encyclical just mentioned.

2. Part of this very duty is maintaining that the moral norm of Humanae Vitae concerning contraception, as prohibiting an intrinsically disordered act, does not admit exceptions. Such a statement is not at all a rigid and intransigent interpretation of the moral norm. It is simply the clear and explicit teaching of Paul VI, often repeated and maintained by the present Pope.

As we read in the Encyclical Humanae Vitae: “Though it is true that sometimes it is lawful to tolerate a lesser moral evil in order to avoid a greater evil or in order to promote a greater good, it is never lawful, even for the gravest reasons, to do evil that good may come of it – in other words, to intend positively something which intrinsically contradicts the moral order, and which must therefore be judged unworthy of man, even though the intention is to protect or promote the welfare of an individual of a family, or of society in general (n. 14).

This is not at all a theological opinion which is open to free discussion, rather, as was stated with extreme clarity by John Paul II on 5 Tune 1987: “What is taught by the Church on contraception is not one of the matters that may be freely disputed by theologians. To teach the contrary is equivalent to leading the conscience of spouses into error”.

3. The Christian moral tradition has always distinguished between positive norms (which bid us to act) and negative norms (which forbid action). Further, this tradition has constantly and clearly maintained that, among negative norms, those which prohibit intrinsically disordered acts do not admit exceptions; such acts, indeed, are morally “disordered” on account of their own innermost structure, hence in and of themselves, that is, they are opposed to the person in his or her specific dignity as a person. For this very reason, no subjective intention and circumstance (which do not change the structure of these acts) can make such acts morally ordered.

Contraception is one of these acts in itself and of itself it is always a moral disorder since objectively and intrinsically (independently of subjective intentions, motives, and circumstances) it contradicts “the innate language that expresses the total reciprocal self-giving of husband and wife” (Apostolic Exhortation Familiaris Consortio, n. 32).
Posted by Barona at 21:04