Emanuel Jaques was a 12 year old boy when he was abducted and tortured for over 12 hours by four homosexual sadists on Yonge Street, back on July 29, 1977. [warning graphic content]. 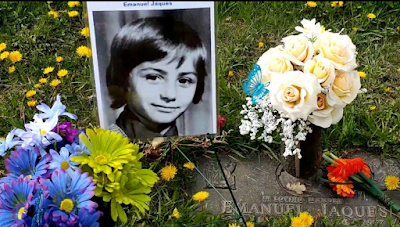 Having raped and tortured Emanuel for half a day, the homosexual sadists finally murdered Emanuel by holding his head in a kitchen sink filled with urine. 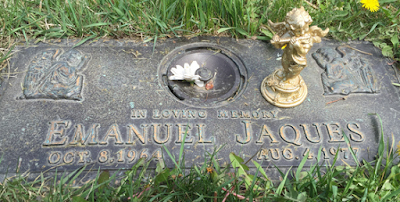 This is homosexual depravity at it demonic, satanic conclusion.

St. John Chrysostom wrote about this great evil, its causes and effects. 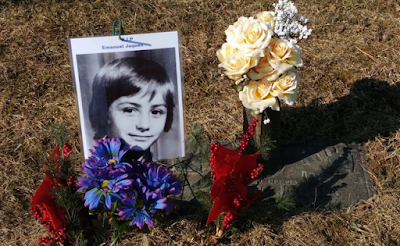 Emanuel was a Catholic, and a recent immigrant to Canada with his family from Portugal. I have written about Emanuel before, and will continue to do so. It is indeed scandalous that Emanuel is forgotten by the local Church.

I call upon the Archdiocese of Toronto to seek to have Emanuel declared "venerable".

Today, in downtown Toronto, a godless hoard ("hell appearing before its time" St. John Chrysostom) will gather to blaspheme God and His creation ("male and female He created them" Gn 1:27) and to "celebrate" sexual perversion. In continued mockery, one of his murderers is out on partial parole in B.C. This is how much children are "valued" in our society.

During this time, let us turn to Emanuel in prayer. Let us pray that through his death, graces will be accepted by homosexuals (many, many who have succumbed to this vice due to sexual abuse when young) who will repent and turn away from sin.

Let us now once again implore Emanuel to pray for us and for the conversion of homosexuals.

Emanuel Jaques, pray for us.

"To all homosexuals we say: Peace, Hope, and Joy in your daily pursuit of chastity and holiness. God be with you! May you always keep in your hearts the words of St. Paul, 'You are not called to immorality but to holiness' ".

While Emanuel's murder was indeed horrific, unless he was targeted for his Catholicism it is incorrect to call him a martyr. For that reason, there may not be sufficient grounds for the seeking on canonization. Our outrage at his death does not excuse us from the obligation to be precise with our language.

Restore DC Catholicism,
I differ with your opinion inasmuch as my friend's uncle was a Monsignore on the panel for the canonization of little Maria Goretti. He returned home to the states to visit her mother ,his sister , and he was furious.
He was furious that despite the knowledge the child was raped over a long period of time, the clerics decided to make her a model for virginity as even catholic women in the fifties were becoming more liberal.
We have a model of holy Virginity, Our Holy mother. in truth St Maria is a saint for children who have suffered abuse.
IMHO, parents , especially widows or single mothers whose children were targeted for abuse by priests they trusted,
are indeed martyrs. Long suffering martyrs who trusted their priests with their children. I know quite a few who have suffered and continue to suffer, even though their children have grown and perhaps moved on with their lives. As a nurse I can also state that some mothers who lose their children to a sudden death are left with sudden onset Alzheimers . I had two of these kind of patient's in their forties and I personally know a woman whose two sons were abused by a priest......she has been diagnosed with "Broken Heart Syndrome" ( yes there really is such a condition.)
Look DC , they claimed Escriva is a saint without a Devil's Advocate, and you can see on the OPUS DEI site a long list of Bishops and Cardinals of the ilk of Bernardin ,who incidentally is also on there praising Escriva's sanctity.

I would say not only was this child murdered as a Satanic sacrifice , but his parents are long suffering too.

Anon at 20:04 - What's this about St. Maria Goretti? Could you unpack the comment about how she was declared a virgin despite being violated? (I am under the impression she was and continued to be a virgin since she did not consent to the act.)

Anonymous 20:04. Thank-you. The declaration of Emanuel as "venerable" would be a public declaration by the Church that a baptized Catholic child was done to death by evil men inspired by Satan, who were engaging in one of the sins that cries to Heaven for Vengeance - multiple times - upon a member of the Mystical Body of Christ. We know how much Our Lord children. We know about His words for those who endanger, abuse, mislead them.

Yes Barona you are very welcome and we know how THEY ( most of the Hierarchy ) are contaminating the INNOCENCE of children with their filthy mandated sex ed which violates God's Natural Law as He gave that responsibility to parents not to unrelated laity and religious.
ONLY parents know when each individual child is read to listen and comprehend moral Christian instruction on sexual relations.
INDIVIDUAL being the key word as no two children mature a the same pace physically , mentally and emotionally . It is ONLY the parents who has the clues what each child is ready to listen to and comprehend.

Irenaeus , yes i stand by what my friend told me twenty years ago. She is now in an Assisted Living Facility...and was for almost twenty years a Diocesan DRE. You read what I wroye correctly and it is the truth.
The last five years of my friend's employment was spent in the rectory of a rabid homosexual pastor who ,was loved by the gullible laity whom he referred to as the "peasants" ( the "whales" were the rich elderly who were the only ones he deemed it necessary to visit on their death beds).

YES , MARIA GORETTI IS the Saint for SEXUALLY ABUSED CHILDREN ! Which Irenaeus, does NOT lessen either her innocence or personal purity in any way!
...BTW the clergy by in large still does not get that because like Groeschel ,even Bishop Trautmen ( see current CMtv videos) are insanely blaming the child victims as either being seducers of the perverted clerical adults or being somehow responsible for their own abuse.

Remember DC Catholic, Jesus Himself said we must become like little children to be in Heaven.
I do not think Jesus was deferring to a panel of clerics to pass a decision of church approved legal sanctity prior when He said this and other truths about the innocent souls of children ,or the condemnation of those who hinder a child from knowing Him.
Who are we to judge the soul of an unborn innocent and where it has gone after suffering an abortion ?

Understand this.
The perverted clerical pederast mafia has relied heavily on church legalisms to maintain their
anonymity and evasion of societal legal penalties.
Bishops and their Diocesan lawyers have pressed sincere Catholics NOT to report to secular authorities.

GO to the police FIRST. Hire a lawyer BEFORE you speak to any church rep.