St. Michael's College School: Basilians, Board and teachers dissenting against the Church on homosexuality? 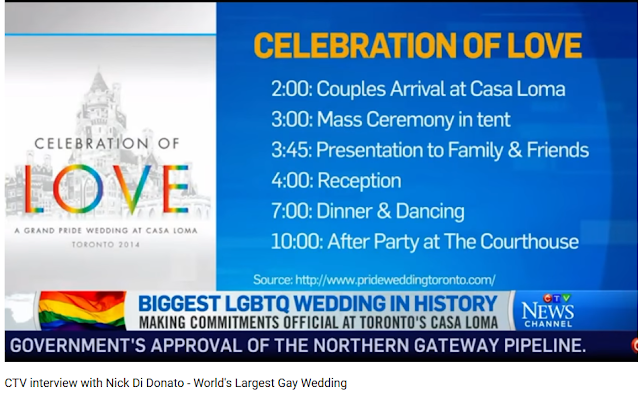 The St. Michael's College School slide, that I have been writing about, has been confirmed by a homosexual alumnus who writes the following in the Toronto Star:


"While there, a group of progressive Basilian Fathers, the Roman Catholic order of priests who run St. Mike’s, decided to ignite meaningful conversations about homosexuality at the school".

The same former student, had this to add against those teachers who upheld Catholic teaching about the intrinsic evil of homosexual acts:


"One of my Grade 9 teachers mildly mocked gay relationships... Other teachers took a more academic approach to their homophobia"

The dissenting student then proceeded to lament that there were many students who "expressed opposition" to pro-homosexual propaganda that was  presented on one occasion at the school.  It is shocking that this homosexual attack students dares to take umbrage that students at a Catholic school uphold Catholic teaching. How fascistic. But even more sinister is that the Basilians and staff allowed homosexual propaganda to be promoted at St. Michael's: on the once sacred ground upon which loyal priests taught the Catholic Faith to young men without adulteration.

Needless to say, this lapsed student failed to mention that in Sacred Scriptures, homosexual activity is rightly regarded as a depravity. One wonders why he remained at the school? Did he not feel any pangs of hypocrisy, or at least shame that he was attending under false pretenses? But I digress.

To the contrary, these young men, that the homosexual student refers to, are to be congratulated for refusing to pander to the sin of homosexual activity.  May God bless them. There are still some real St. Michael's men left.


The homosexual student's article in The Star only confirms the bizarre behaviour, the decadence, of far too many effete students who have come to populate the school over the past two and more decades. For example, the "Gangnam Style SMC parody", or the widespread use of Snapchat and Instagram. The internet has a serious problem, and we all know what it is. Sadly, far too many foolish and indulgent modern mothers are in denial about their boys' predilections. Boys need discipline. A lot of discipline. They certainly are not getting it at home, nor at the modern St. Mike's.

All of this is indicative of moral weakness, and leanings towards effeminacy. What real man - or masculine boy aspiring to manhood  - would use such  narcissist-enabling social media? All of these aberrations flow from the Basilians, riddled as they are with pro-homosexual dissenters. It is simply not possible that these wayward priests are able to turn these boys into real men. 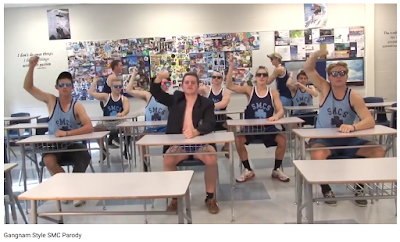 The silence of the media, regarding the Basilians, can only be logically explained with hatred for the Catholic Faith. It is obvious: the entire problem flows from the "progressive" Basilians - backed up by nominal Catholic, godless parents. The media - tasting blood - is moving in for the kill: attack the "administration", so-called "toxic masculinity", and now, trot out a contrived "homophobia" - but NOT one word about the toxic Basilians. 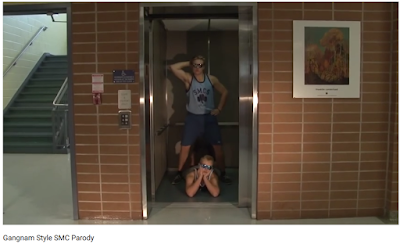 The media would like nothing better than the total demolition of Catholic education at St. Michael's under the guise of the administration's proposed so-called "Respect and Culture Review". I am afraid that the media's wish will come to pass. Nominal Catholic parents, will back the Basilians, as the Catholic Faith is the least of their concerns. A case in point: the vulgar, effete, "Gangnam Style SMC Parody", is six years old, yet not one parent, one member of the administration, nor one Basilian denounced it and ordered its erasure. This shows us the lack of vigilance, care,  and concern for these boys' souls from priests, staff (though there still are a few holdouts), and parents.

This  massive slide into decadence, accelerated dramatically in the late 80s/early 90s, when the Basilians decided to deform the venerable institution of once Catholic education and true Catholic manliness into a money making machine. Gone was any concern for taking boys from good, practicing Catholic families. It was all about accepting boys from nominal Catholic families, as long as the money was there. What else would "progressive" Basilians do? Well, start promoting homosexuality on the campus, of course. Allow the teaching of dissent. (I have been informed, that in recent years, a layman was teaching religion from a rationalist perspective).

The result is  that the school is now heavily populated by boys who  do not take their Faith seriously. Why should they? Their parents don't. The priests have but all abandoned the doctrine taught by such venerable and holy Basilians such as Fr. Rocco Volpe, Fr. Joseph "Old Man" Thompson, and Fr. James Enright. May they all rest in the peace of Our Lord for their loyal service to Him, and in teaching and proclaiming the Truth to young Catholic men. These holy priests knew the seriousness and gravity of teaching the Catholic Faith. These priests fought the good fight, they have been rewarded.

But that was another time.

Let us now return to the tragic sequence of events that befell St. Michael's in the late 80s/early 90s, as SMCS mutated under dissident Basilians into this grotesque, modern day horror that we have before us.

Tuition started to rocket up, with additional "fees". Ah yes, those additional fees! Today tuition stands at $19,500, and a first year shakedown of $5000. Millions were needed, and raised to pay for massive new buildings and extensions. The older generation of faithful, loyal priests were de facto evicted from their retirement home. So much for "goodness", so much for any Basilian community. This disgraceful school is  NOT the real St. Mike's. It is not the school I attended. Do not be fooled by anyone who tells you otherwise.

As the money poured in, corruption deepened. It usually always does. Nominal Catholics with cash (what ever happened to the school's original focus of superb Catholic education for all boys?) suddenly had the opportunity to send their nominally Catholic son to a "prestigious" school , that still churned out a technically good education, but with all the problems of Catholicism being an "intolerant" religion that made serious moral demands on life gone.

Unlike my day, when Fr. Enright taught, and explained the holiness of Humanae Vitae, there would be no unpleasantries like that. I doubt Fr. Enright would last 24 hours today, once contracepting parents were informed. One can imagine it:

And so any loyal priest today, would have his head chopped off. Besides, when was the last time you heard a modern "progressive" Basilian defending the sanctity of marriage?

So there we have, my dear friends and fellow alumni, the general backdrop to the crisis at St. Michael's College School. The fish rots from the head down. There will be no hoikety Choik on C...

In light of the  "progressive" Basilians, let us now take a look at one of the Members of the Board. 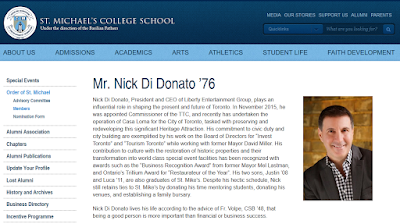 How many Catholics are aware that Nick Di Donato sits of the Board of Directors of St. Michael's College School?

How many Catholics are aware that Nick Di Donato's Liberty Entertainment Group paid for a mass "same-sex wedding" at Casa Loma in 2014? 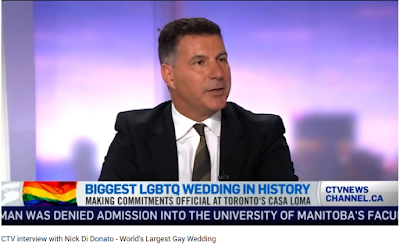 How many Catholics are aware that the Basilians awarded the "Award of St. Michael's'" to Nick Di Donato, in 2015?


The wedding -- which organizers said was the largest of its kind in North America -- was held in the gardens of Casa Loma, a palatial Toronto home built between 1911 and 1914, which has since become a popular tourist attraction and event venue.
"What we see Casa Loma as is this grand lady at the top of the hill watching Toronto evolve," said Nick Di Donato, president and CEO of the Liberty Entertainment Group which operates the facility and hosted the event. "This is a dramatic part of that evolution."
Di Donato's company took on all costs for the event, with the couples only having to pay for an Ontario marriage licence.
"It's a lifetime event and something they'll remember forever," he said. "Most of these couples are from outside Toronto -- they become our ambassadors for the city of Toronto in terms of the openness of the city and the welcome that we've provided them."

Now, a question for the "progressive" Basilians:

Can they please explain the presence of Nick Di Donato on the Board of Directors?


It is time for the RESIGNATION of the ENTIRE BOARD. It is TIME for Cardinal Collins to contact the Roman Authorities to initiate the transfer of St. Michael's College to the Archdiocese of Toronto.

Please let your concerns be known to the Basilians' spokesman, Fr. Thomas Rosica, who can be reached at:

His Eminence, Thomas Cardinal Collins may be reached at:

Look at these over-educated bachelors. Do they look like men who care for the salvation of souls?