Pius IX: what a Pope who combated the "deadly scourge" of masonic liberalism! 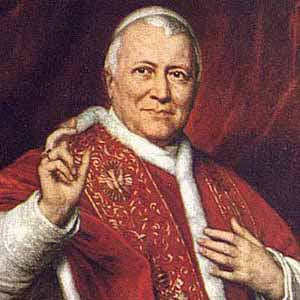 The holy Pope, Blessed Pius IX exposed and denounced the scourge of liberalism in his Syllabus of Errors. This compendium is the litumus test of of a Catholic. Since the time that the great Pope exposed these evils, the errors have only increased. Let us serenely hold to these truths, and not be swayed by any deception placed before us.

Notice how Blessed Pius established his position from a doctrinal position? Doctrine! Doctrine!

Modern man (and woman, for that matter) hates doctrine! Notice too, how the wise Pope exposed that Satan is behind this false liberalism, this false freedom, this "deadly scourge"? It is only a truly paganized society that can reject the Syllabus.

The faith teaches us and human reason demonstrates that a double order of things exists, and that we must therefore distinguish between the two earthly powers, the one of natural origin which provides for secular affairs and the tranquillity of human society, the other of supernatural origin, which presides over the City of God, that is to say the Church of Christ, which has been divinely instituted for the sake of souls and of eternal salvation…. The duties of this twofold power are most wisely ordered in such a way that to God is given what is God’s (Matt. 22:21), and because of God to Caesar what is Caesar’s, who is great because he is smaller than heaven. Certainly the Church has never disobeyed this divine command, the Church which always and everywhere instructs the faithful to show the respect which they should inviolably have for the supreme authority and its secular rights….

. . . Venerable Brethren, you see clearly enough how sad and full of perils is the condition of Catholics in the regions of Europe which We have mentioned. Nor are things any better or circumstances calmer in America, where some regions are so hostile to Catholics that their governments seem to deny by their actions the Catholic faith they claim to profess. In fact, there, for the last few years, a ferocious war on the Church, its institutions and the rights of the Apostolic See has been raging…. Venerable Brothers, it is surprising that in our time such a great war is being waged against the Catholic Church. But anyone who knows the nature, desires and intentions of the sects, whether they be called masonic or bear another name, and compares them with the nature the systems and the vastness of the obstacles by which the Church has been assailed almost everywhere, cannot doubt that the present misfortune must mainly be imputed to the frauds and machinations of these sects. It is from them that the synagogue of Satan, which gathers its troops against the Church of Christ, takes its strength. In the past Our predecessors, vigilant even from the beginning in Israel, had already denounced them to the kings and the nations, and had condemned them time and time again, and even We have not failed in this duty. If those who would have been able to avert such a deadly scourge had only had more faith in the supreme Pastors of the Church! But this scourge, winding through sinuous caverns,

. . . deceiving many with astute frauds, finally has arrived at the point where it comes forth impetuously from its hiding places and triumphs as a powerful master. Since the throng of its propagandists has grown enormously, these wicked groups think that they have already become masters of the world and that they have almost reached their pre-established goal. Having sometimes obtained what they desired, and that is power, in several countries, they boldly turn the help of powers and authorities which they have secured to trying to submit the Church of God to the most cruel servitude, to undermine the foundations on which it rests, to contaminate its splendid qualities; and, moreover, to strike it with frequent blows, to shake it, to overthrow it, and, if possible, to make it disappear completely from the earth. Things being thus, Venerable Brothers, make every effort to defend the faithful which are entrusted to you against the insidious contagion of these sects and to save from perdition those who unfortunately have inscribed themselves in such sects. Make known and attack those who, whether suffering from, or planning, deception, are not afraid to affirm that these shady congregations aim only at the profit of society, at progress and mutual benefit. Explain to them often and impress deeply on their souls the Papal constitutions on this subject and teach, them that the masonic associations are anathematized by them not only in Europe but also in America and wherever they may be in the whole world.
Posted by Barona at 20:06