OPEN LETTER TO FR. ROSICA: SHOULD WE BELIEVE YOU, OR ARCHBISHOP VIGANO? 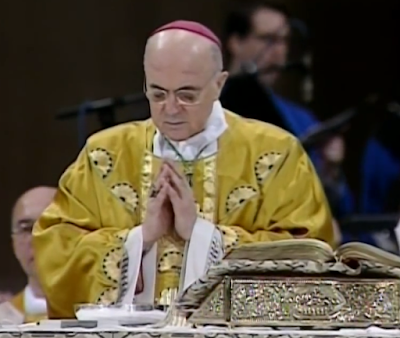 The past few days have seen you rejecting Archbishop Carlo Maria Vigano's account of his introduction of prisoner of conscience, Mrs. Kim Davis to His Holiness, Pope Francis.

In a video, published by the New York Times, you are seen referring to the prisoner of conscience, Mrs. Davis, as "this person". How sad that you could not refer to her by name. If, in fact, you did not even know her name, surely you would hardly be in a position to comment about her?

Fr. Rosica, you have accused His Grace Archbishop Vigano of lying. That is a serious charge. You have also accused him of taking "thirty pieces of silver". That is an even more serious charge.

You say that "God will deal with him". What do you mean?

How does this, Fr. Rosica, conform with your continual advocacy of "mercy"?

You promote the idea that the Church no longer refer to the grave sin of sodomy as even an "intrinsic disorder". How is it that you seemingly excuse this grave sin, yet are so eager to - so it would seem - cast Archbishop Vigano into Hell? A Hell, we are told by so many churchmen that is empty? Am I mistaken?

Further, who are these "wrong" people, publications and websites? You are engaging in an ad hominem attack, without addressing his key issues!

For example, let us take the KEY issue at hand: is there, or is there not a HOMOSEXUAL NETWORK in the Church? You REFUSE to confront this issue. Why? 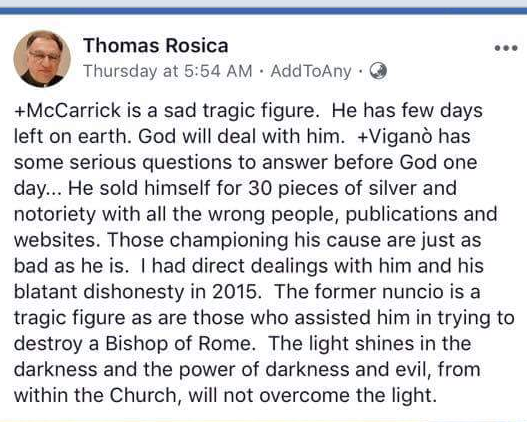 May I ask: what do you mean by "thirty pieces of silver"? Are you accusing the Archbishop of betraying Christ and His Church? How?

Are you perhaps accusing him of receiving bribes, money? How? Who gave him the money? And for what purpose? Facts please, not innuendo.

I have read many accounts by quite a number of eminent bishops from your own country, the United States (a Nation, may I remind you, as a non-American, that in Her First Amendment She affirms free speech: a right you were going to try to DENY to Catholic blogger, Mr. David Domet of the distinguished blog, Vox Cantoris. From what I read, you were were trying to silence this brave man for raising very serious questions about your heterodoxy), who state very emphatically that the Archbishop is a man of honour and integrity.

Your fellow countrymen, their Excellencies Bishops Strickland and Morlino were the first two bishops to support and demand an investigation. Are they wrong? Either His Grace is a man of integrity, honesty and honour, as your fellow countrymen state, or he is a liar.

Is Archbishop Chaput wrong in demanding that the Pope cancel the "Synod on the Youth", given that Catholics NEED to know if the Holy Father was covering for the notorious homosexual, Theodore McCarrick?

Character and integrity are very important. I must say, that since the time you interviewed ex-priest and (to use the late Monsignor Vincent Foy's words), "arch-heretic" Gregory Baum, your credibility has evaporated, and not recovered.  The tragic Baum even admitted to being a practicing homosexual. Yet, you have remained - to my knowledge - silent on his depravity. I understand that Baum died as an apostate. May I be proved to be wrong.

Fr. Rosica, we Catholics await, from you, some documents proving that Archbishop Vigano is a liar. How can we believe you when you spoke of the arch-heretic Buam in this manner:

"I've certainly admired very much your theology, your writings; but also your love of the Church, your love of Christ, and you help to keep alive - not only the spirit of the Second Vatican Council - but the authentic teaching of the Council".

"... you remain a faithful, deeply devoted Catholic; you love Jesus, the Church, the Eucharist".

You lied Fr. Rosica. YOU LIED TO CATHOLICS ABOUT BAUM!

Gregory Baum left the Church, confessed many heresies throughout his life, yet you stated he remained a "faithful, deeply loyal Catholic..."

THAT IS A BOLD FACED LIE!

If you can lie about Greogry Baum, Catholics will naturally ask: why would you not lie about Archbishop Vigano?

With the Archbishop's publication of documentation regarding prisoner of conscience, Mrs. Kim Davis, (know to you as "this person"), your credibility hangs in the balance.

Please be assure of my prayers for you, but I shall not remain silent. Fr. Gerald Murray of the Archdiocese of New York has called upon the Catholic laity to continue to raise the issues drawn to our attention in the "Vigano Testimony". Please also be assured that I shall continue to do so.

Sincerely in Jesus and Mary,

Email ThisBlogThis!Share to TwitterShare to FacebookShare to Pinterest
Labels: Bishops, Crisis in the Church, Homosexuality, The Persecuted Church

Thank you for asking Roscia these questions. He is not in a position to throw stones at anyone. He is arrogant and lacks complete humility.


He better hope that God is more merciful than the false mercy Roscia and PF promote.

Imagine Rosica being appointed as Toronto's next archbishop. Stranger things have happened. Under the current Francis-regime, anything is possible. Lord, have mercy. TSE

In the third-person, archbishops are referred to as "his grace".

"...he remained a 'faithful, deeply loyal Catholic...'" Ahah, another variation of the heretics' line in the Jesus Seminar at Xavier University (Jesuit, what else?) in Cincinnati. These "theologians" used to refer to themselves as "sincere, faithful and committed," even as they, like termites, ate away at the Magisterium and spit out their "nuances" on doctrine.