Jewish historians attack G.K. Chesterton as a "virulent anti-semite", revealing hatred for Christ and His Church 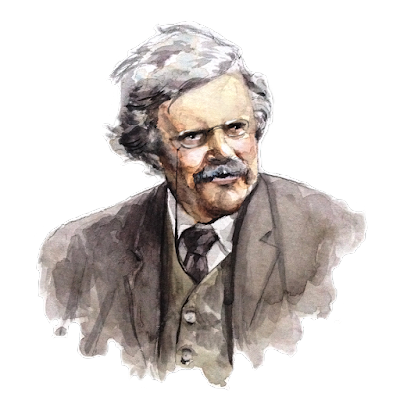 “The greatest influence in writing was G. K. Chesterton who never used a useless word, who saw the value of a paradox, and avoided what was trite.”
Archbishop Fulton Sheen

The tragedy of the Jewish nation continues to unfold before our eyes. The Jews, as a nation, continue to oppose the Divine Plan for Order, and continue their desperate losing fight against Christ and His Church. Every attack on Christ involves the Jewish Nation in dire catastrophes. Sadly, they continue to remain blind to Christ and His Truth.

Let us review the ongoing international campaign against G. K. Chesterton, as presented in the "The Times of Israel".

"Alderman highlighted the manner in which Chesterton’s opposition to capitalism had led him to defend Edward I’s expulsion of the Jews from England in 1290. In his “Short History of England,” Chesterton described those who were driven from the country as the “capitalists of their age” and praised the monarch as a “tender father of his people....

In his book “The Jews of Britain 1656 to 2000,” historian Todd Edelman has also implicated Chesterton in the “stream of crude anti-Semitism”...  The most virulent attacks in the Marconi affair,” Edelman writes, were launched by Chesterton, his brother Cecil, and the writer and politician Hilaire Belloc. Their “hostility to Jews was linked to their opposition to liberalism, their backward-looking Catholicism, and their nostalgia for a medieval Catholic Europe that they imagined was ordered, harmonious, and homogeneous.”

Notice that Alderman's and Edelman's attacks are particularly focused on the social Kingship of Christ. These Jewish historians are well aware of the implications of the Nation and the State being Catholic, Christian. Hence their attack on "Catholic Europe"; hence their attack on the great, far-seeing Monarch, King Edward 1st, who rightly defended the English Nation. It should be noted that it was under the vile William of Orange, that Jewish money lenders returned to England; then, after quickly establishing the Bank of England, they forced "union" with Scotland. Let us also take very careful note of Edelman's advocacy of liberalism, and opposition to "backward-looking Catholicism".


What does this reveal to us?

Simply: international Jewry is virulently opposed to Christ the King, and seeks to further the virtually destroyed Catholic Social Order, by playing a major, if not the leading role in the continued de-Christianization of Society, as a preparation for the ushering in of the Antichrist, whom (as the Fathers teach) they will proclaim as the Messiah. That the nations of the world should return to Christianity is anathema to international Jewry. Catholics should note that the Popes, from Pius VI onwards, have fought the scourge of liberalism as a cancer on Christian society.

Things have not changed dear friends since two thousand years ago when the leaders of the Jewish nation crucified the Lord of Glory. God writes straight with crooked lines. Geoffrey Alderman and Todd Edelman have done Catholics a great favour. In their arrogance, they have revealed to us the position held by International Jewry vis-a-vis the the Catholic Church. They opposed Him then, and they oppose Him today. They are, and until their inevitable conversion (as St. Paul prophesied - himself a bigoted, Jewish racialist, until he was struck down on the road to Damascus), the leaders of the opposition to Christ the King and His Catholic Church.

Please pray for the conversion of the Jewish Nation, that they cease re-crucifying Him who took His Flesh from the Jewish Nation. May they come to see whom they have crucified as the Messiah; then, they shall weep openly and bitterly.
Posted by Barona at 18:03

Chesterton is one of my favourite writers; I am always trying to introduce his work to younger readers, but on historical matters he was no more infallible than, say, Pope Boniface VIII (1294-1303) who imprisoned his predecessor (Saint) Celestine, the 'angel pope'.
G.K. was as innocent as an angel at times, but his journalist brother Cecil could be devious, hot-headed and opportunistic, more like Boniface to GK's Celestine.
Edward I's expulsion of Jews from England in 1290 was a vicious business and quite unnecessary; Chesterton was utterly wrong in his admiration for this brutal king.
I can only think GK was under Cecil's influence when he wrote this dangerous nonsense, or he may have taken one of Belloc's madder flights of historic fancy as gospel truth.

History is full of cunning corridors (such as the pope's support for William of Orange) as T.S. Eliot remarked.
Eliot was an odious anti-Semite in some of his writings as was Cecil Chesterton.
Belloc dedicated his excitable and conspiratorial book on the Jews to his Jewish (female) secretary.
I wonder how the lady liked this flawed book which looks irresponsible in the light of the death camps in which Anne Frank and millions like her died a decade later.
The conspiracy to murder six million Jews was made possible by the silence of Germany's Catholic bishops and the co-operation of most Protestant churches with the exception of brave men like Bonhoeffer and Karl Barth.

Please think twice Barona before trotting out phrases like 'International Jewry'.
In using such language you are lying down with some very mad and bad bedfellows - the alt-right neo-Nazis who flood the internet.

Pope John Paul II apologized for the suffering of Jewry at the hands of the church down through the centuries.
John Paul said that the Jewish people were not to blame for the death of Jesus.
Pope Benedict made an official statement at a meeting with Jewish rabbis, saying in effect that the messianic prophecies of the Old Testament could be read without necessarily concluding that Jesus is the messiah.
Benedict was denounced for saying this by the Society of Pius X and by Protestant fundamentalists.
None of them mentioned the persecution of Jews under the Spanish and Roman Inquisition nor Martin Luther's call for elderly Jews to be murdered and for younger Jews to be sold into slavery.
Luther wanted their synagogues burned down and suggested the roofs be covered in pitch so that the flames would burn more brightly.
I wonder what Jesus of Nazareth would think of that!

There is NO conspiracy of International Jewry any more than the governments of Europe are conspiring to flood us with immigrants in order to undermine white European culture.
Our immigration policies may well be badly planned (see Douglas Murray on YouTube and read his book 'The Death of Europe') but there is no one to blame for our immigrant confusion except our fallible (white) politicians.

Jewish businessmen are fallible too but they do not work in concert to undermine Catholicism.
The priests who raped children under the protection of their bishops undermined Catholicism from the inside.
The former president of Ireland said she thinks the church has just five years to save itself from extinction.

Innocent Jews were made the scapegoat of Europe's troubles, but the presence of Jews in Europe cannot be blamed for our centuries of warfare which came to a head with the catastrophic world war of 1914-18.
Many German Jews fought for the fatherland in that futile war and were later deported to the death camps by the Nazis who loved to talk about the menace of International Jewry.

Remember that Hitler was baptised a Catholic and that Pope Pius XII (for his own reasons) never excommunicated him.