Archbishop Sheen:"...either the merciful Face of Christ, or the horrible face of Satan" 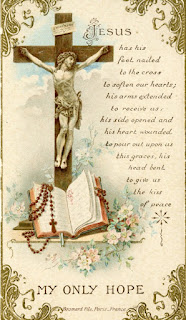 I have just read online 'Why are so many atheists on the CNN blog' by Bishop Robert Barron.
In his short list of great Christian apologists, Bishop Barron cites G.K. Chesterton, C.S. Lewis, Francis Schaeffer... and Fulton Sheen.
Thank you for this old video of Archbishop Sheen; there are more of him on YouTube.

Daniel Dennett and Sam Harris are the two atheists I most enjoy reading as well as watching on YouTube.
For them Christianity is a myth that has outrun its course.
Alas, they cannot say the same for sin.
As Chesterton's Father Brown said, 'I am a man with all the devils men have inside them.'
Poor Father Brown hadn't heard of Gestalt therapy or Mindfulness or whatever the smarts are doing currently.
Death wonderfully concentrates the mind as Dr. Johnson (a God-fearing Christian) said.
In the face of death we have to think hard about sin, evil, repentance, love, truth, duty, responsibility, freedom, and the emptiness at the heart of man.

And that leads us inevitably to Jesus of Nazareth (as Fulton Sheen recognizes) even if we reject the Jesus of the New Testament as Sam Harris does.
H.G. Wells, a science-led agnostic, said Jesus was the most important person in history by far.
But to the atheists of the New Enlightenment, the Jesus of faith is an embarrassment and an impediment.
Jesus for these men is like Saint Paul's stumbling block. He has to go.
This was the party line in every Communist country.
Pope John Paul lived under this regime in Communist Poland.

I notice that Daniel Dennett, in a YouTube lecture, presented Richard Dawkins with a Jesus novelty doll, thus causing his audience to laugh uproariously.
A friend who was watching with me said: 'They can't quite leave Jesus alone, can they?'
She was right. We live not so much in a demon-haunted universe (Carl Sagan's phrase) as a Jesus-haunted world.
Either Jesus was correct in what he said about sin or he was wrong, big-time wrong.
Either Jesus was right about judgment, heaven and hell, or he was a deluded crank who led humanity astray.
Either Jesus' terrible death on the Cross changed something forever or it did not.
Either Jesus is Saviour and Lord, or he was merely a man of his time, an eschatological prophet who was misunderstood by both his disciples and by the early church fathers.
Either the Celtic saints such as Patrick, Columba, Ninian, Aidan and Cuthbert brought the light of the Gospel into a sick world, or they brought just one more layer of superstition which the light of science and reason must soon extinguish.
Either Augustine saw the truth about himself in his 'Confessions' or he was just another guilt-ridden neurotic living in the age before Freud and neuroscience.
Which is it to be?

Karl Barth, who might well join Bishop Barron's list of Christian apologists, has just one entry in the Encarta Book of Quotations:
'Man is not good, man has never been good, man will never be good.'

The New Atheists believe men and woman can be good by just wanting to be good.
I wish the New Atheists could account for the evil (both latent and active) in my own wretched heart.
If the Jesus of faith is an illusion, then I am left with my own sinfulness, in a sinful world.
Where is the moral genius who can make sense of it?
Stand up and be heard, Sir, because our sin-perverted world has need of thee.

It's a bit like 'Waiting For Godot'.
Someone who will never come.

'Jesus Christ, Son of God. Have mercy on me. A sinner.'

And me, a sinner as well. What an incredible time to be a Catholic. There is no cultural support, a hostile media and all the powerful as well, and even our own pope and most of the Church has gone over to, if not darkness, weakness and lack of zeal for God, His church, His people. Onward Christian soldier, marching as to war. He sees it all. He'll answer it in His good time, maybe our lifetime, maybe not, but He will answer it.
Archbishop Fulton Sheen, I often wonder what he would say if he were here today. Would he be silent like his brothers? I cannot imagine it, but never did I imagine things would get nearly this far without a proper defense being made.

Kathleen is right.
There is no cultural support, and there is hostility from the media and politicians.
Before Christ returns to judge the world, there will be a great falling away from the faith (2 Thessalonians 2:3).

This means the Holy Spirit will draw very close to us in our prayer groups.

The situation is bad in much of the Protestant world, Kathleen.
Erwin Lutz, the faithful pastor of Moody Bible College (YouTube) visited the heartland of Protestant Germany; the minister in the biggest church there held up the Bible and the Koran and said that he preached from both.

The Holy Spirit has departed from these anti-churches.
Synagogues of Satan, all.

The Holy Spirit will depart from those churches that carry out same-sex weddings.
Whenever I visit these liberal churches I have no sense of the fear of God in their ministers; the members do a lot of hugging and kissing, but there is no presence of the Holy Spirit - you could be in Starbucks.

The hymns of Charles Wesley (brother of John Wesley) strengthened my faith at a time of spiritual depression.
On YouTube listen to Wesley's 'And can it be that I shouldst gain an interest in the Saviour's blood?'
Those Wesleyan hymns are sound in their Biblical theology as well as being great poetry; nothing like the wishy-washy drivel that passes for hymns in liberal Protestant churches.

If I could introduce hymns to Catholic churches it would be the Psalms of David that are sung in our free churches.
The Psalms contain all the spiritual riches of Heaven.
Pray with them on a daily basis.

In your reading, go to the lives of the Early Fathers such as Athanasius, who fought the good fight against the heresy of Arianism; a heresy that had wormed its way into the very heart of the Church.
Athanasius stood so alone that he was later named 'Athanasius Contra Mundi'.

Expect the princes of this world to be against Christ.
The entertainments industry and the intellectuals both share an indifference if not downright hostility to the Gospel.
Religious people of my age are interested in Yoga, Mindfulness, New Age, astrology channelling, Wicca, the I-Ching, Garderian Magic, Buddhism, Vedanta - anything but Jesus Christ and Him crucified.
America as someone said online, is now filled with every filthy demon.
So is my native Scotland.

Ask yourself this.
Would the spiritual darkness of our times have demoralized the Celtic saints like Patrick, Columba, Aidan or Cuthbert?
Yes, they would be praying and fasting for sinners, but they would see that the harvest is great and the workers few.
They would bring the Gospel right into the foulest of places.
So must we.

These men were so afraid of God that they had no fear of the hostile culture around them.

I think often of Saint Columba of Iona, a fierce and weather-hardened man with a piercing gaze. The monks who studied under him brought the Gospel to the heathen.
Through the power of the Holy Spirit, Patrick converted the tribal Celts.

Who would have dreamed that once holy Ireland would sink so low today?

A young Christian woman from Zambia told me: 'In my country we weep for Britain.'
She was out in the streets of my city giving out Bible tracts.
I watched as both the poor and the well-dressed gave her a chilly 'No Thanks'.

The Requiem Mass in Rome for Cardinal Bernard Law of Boston (YouTube) chilled the hearts of many Catholics and Protestants alike.
Law's diabolical crimes (his cover-up of priests who raped children) were never once mentioned.
Nor was Christ's terrible judgment on anyone who harms His little ones.

The Vatican has lost the faith.
Francis and his self-admiring bishops look like zombies going through the motions.
The high offices they hold will not save them on the day of judgment.

God is not fooled by their flamboyant display of holiness.
God is very angry.

Watch 'Pray for our priests and bishops, lest they be damned' (YouTube).

Thank you, Toronto Catholic Witness for printing my comments.
I can't tell you how much I am looking forward to spending a few weeks in your city, later this year.

May I recommend a good book on the Psalms, written by a devout and serious scholar?

It is 'The Psalter Reclaimed - Praying and Praising With the Psalms' by Gordon Wenham (Crossway 2013) who was educated at Cambridge and Harvard, and now teaches at Trinity College Bristol in England.

Professor Wenham quotes the 18th Century Scottish patriot Andrew Fletcher:
'Let me write the songs of a nation, and I care not who writes its laws.'

The Psalms belong to the Jewish people, but they also belong to Christians, who are 'a peculiar people, a royal priesthood'.
Satan is not able to attack us when we are exalting the Lord as John Piper reminds us.
Psalm 148 bids all the nations of the world to praise the Lord.
Jesus would have grown up with the Psalms as they were sung in Hebrew at the synagogue in Nazareth, and He recited the Psalms as He hung forsaken on the Cross.

There is a YouTube video of the Our Father being sung in Aramaic in the presence of Pope Francis. The singers are a young girl with a beautiful voice and an Orthodox priest with a powerful baritone.

'How can we sing the Lord's song in a strange land?' is the question that Kathleen and many of us ask.
Our post-Christian culture is very strange indeed, rather like pagan Rome in which the Apostle Paul was probably beheaded.

The Lord commands us to sing His heavenly songs just as He commands the whole world to be saved in Jesus Christ, 'for there is salvation in no other name'.

Please watch 'Pray for our priests and bishops, lest they be damned' (YouTube) a talk given by a holy Catholic priest who sees the terrible danger which threatens Christ's people.