The Conversion of the Jews is a Catholic's Duty 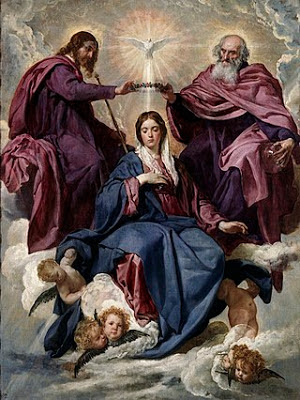 In the Book of Acts, St. Peter, the first Pope and a Jew, admonished his fellow countrymen that there was no name under Heaven that we are saved, but that of Christ Jesus. On that day, over 5000 Jewish men converted to Our Lord Jesus Christ, who, according to the flesh, was a Jew of the House of David.

In the Old Testament, Israel, was that Nation that was selected by God for the purpose of giving humanity to His Son, and His Son to humanity. Israel,  does not mean the present day Zionist state of "Israel", which is a secular entity and opposed to Our Lord Jesus Christ. Catholics should take note of this key point. Zionism is an enemy of Our Lord and His Church.

Catholics who read Polish, would do well to study the writings of St Maximilian Kolbe. This great Marian Franciscan strove might and main all his life to convert Jews and Freemasons. Needless to say, for his efforts, they strove to block his beatification and canonization. The enemies of God failed. God would not be mocked, and His great saint was formally canonized.

What would St. Maximilian say about the betrayal of the churchmen of today? Even if it be a man who would one day be pope? Even if false documents be published in the Vatican? A Vatican that the saint warned the Freemasons intended to rule, with the pope as the devil's "errand boy".

The Queenship of the Blessed Virgin applies to her position within the Kingship of Christ. As the popes have always taught, the State owes Christ the King public worship and honour. The Church may tolerate "separation" of Church and State to avoid greater evils (e.g. in a divided nation, armed conflict), but She calls on all Her children to strive to make the social Kingship of Christ a reality. In doing so, Catholics then give due honour to Mary as Queen.

Firstly, Mary is the Queen of souls and hearts. But, as we are also social beings, she is the Queen of our social life and activity. The highest form of social life of a people is their union as a state or nation. Mary is, by right, the Queen of every Nation, beginning with her own, the Jewish people. When Catholics realize this, and believe this, they quickly understand what it means for the state of "Israel" to reject Mary. Interestingly, prior to the rise of political Zionism, not one rabbi could be found who ever taught that "Israel" could be re-founded by men, These rabbis, though they rejected Our Lord, still understood that "Israel" is for God to dispose, not men.

Friends, the Jews are in grave spiritual and physical danger. They rejected Our Lord and now, sadly, most no longer even believe in the God of Abraham, Isaac and Jacob. Many were involved in Bolshevism, and to this day, many - sadly many - follow one false messianic ideology or another. If not bolshevism, then international finance and capitalism, freemasonry, socialism, neo-conservatism, alt-left and alt-right. Everything -seemingly -  but not Our Lord Jesus Christ. Having rejected Our Lord 2000 years ago, their motto would seem to be "non serviam".

The Church has taught - as the great Jewish convert Abbe Lemann documented in his monumental work, "L'Antechrist" (The Antichrist) - that the Man of Perdition, the Man of Sin, will be Jewish. This makes total sense. Whereas, the Jews rejected Christ, and crucified Him; they will accept another, the Antichrist. Satan seeks to seduce the Jewish people -  the once chosen people of God - through their own choosing of the Antichrist, to become his people. He has torn them away from Christ, now, in their tragic wandering from one error to the next, he seeks to get them to acclaim the Man of Sin as the Christ. St. John the Evangelist (himself a Jew) prophesied this in the Book of Revelation.

Pray to Our Blessed Lady, the Queen of Israel for the conversion of the Jewish people, that they come to see whom they have pierced. That they see in Him, not just a fellow Jew according to the flesh, but their God, their King, the King of Israel, the World, the Universe!
Posted by Barona at 16:44

There are a number of titles by Abbe Lemann that appear interesting.However, I can not seem to find any that are translated into English. Where might I go to find them?

The rising Nazi/neo-Ottoman resurgence will make the Jews very fearful and distrustful. Recent celebrations of the anti-Semite Martin Luther are also troublesome. The Catholic faith is the natural and divinely appointed home of the Jews. We should unequivocally stand against the heresies and ideologies that poison our relations with this blessed people.