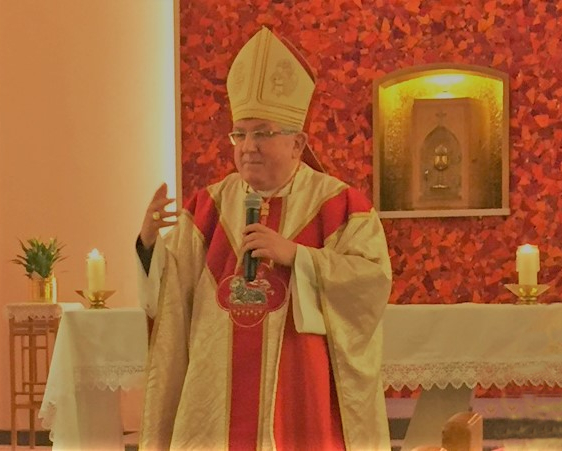 On St. Joseph's Day, His Eminence Thomas Cardinal Collins said Mass at St. Joseph's Health Centre in the west-end of Toronto. His Eminence preached on the quiet, strong, holiness of St. Joseph, pointing him out as a model for us all.

"Today, throughout the whole world, we celebrate the Feast of the great St. Joseph", began the Cardinal Archbishop of Toronto.

Cardinal Collins emphasized that St. Joseph was the Protector of the Universal Church. As such, even during dark hours and times, we should have confidence in Joseph that, as he defended the Holy Family from attack, so too, would St. Joseph defend the Church.

"We honour saints so that they may be an example for us", said the Cardinal. "He is or heavenly guardian", the one we look to for example...continued His Eminence. After a few words on a Catholic hospital under the patronage of so great a saint, the Cardinal then drew his sermon to a close with an emphasis on St. Joseph being the patron of a happy death: "ultimately we are just passing through".

Today, on Palm Sunday as we begin to reflect more intensely on the coming Passion of Our Lord, may we pray to St. Joseph to draw closer to the Cross.

MARCH 25, 2018
Vatican in agreement : no denial from any religious community or organisation in the Catholic Church.They all agree with me
http://eucharistandmission.blogspot.it/2018/03/vatican-in-agreement-no-denial-from-any.html