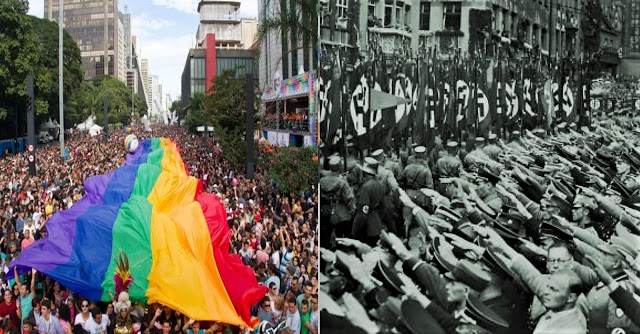 "An ideology of evil" is what was, and is, driving the demand to accept homosexuality. So wrote St. Pope John Paul II about the push in the European Union to have so-called "homosexual unions" accepted. Homoeroticists do not consider their lifestyle an "alternate" one, but superior to the "breeders", the "masses", as they refer to normal men and women.

This superman mentality of the 21st century homosexual theologian, as I noted earlier,  is inherited from the proto-Nazi occultists of the 19th century, the early Nazi homosexuals of the Weimar Republic, and the fully fledged rabid SS and Gestapo of the Third Reich. We have to understand and be aware that post-War homosexual gnostics have spent decades developing an entire "theology" - really an ideology - around the "queerness" of Christ and Christianity. They are dedicated to the glorification of homosexuality as the ritualistic centre-piece (through homosexual practices de facto becoming anti-sacraments) of a new "religion" that rejects and perverts the very notion of human nature as a given reality (c.f. Memory and Identity, Pope John Paul II, p.13).

This homoerotic, gnostic "religion" is based on a perverted belief that there is a secret tradition of homosexuality in the Bible: David and Jonathan, and Our Lord and St. John. Saints such as Sts. Perpetua and Felicity, Sts. Sergius and Bacchus, St. Francis of Assisi have been declared by homosexualist gnostics as engaging in homosexual practices and being adherents to an earlier "acceptance" of homosexuality amongst "ancient Christians"; in fact, according to these dissenters, founders of the homoerotic, gnostic false religion. With this counter-"gospel", the homosexualists seek to have the vice of homosexual practices not only excused, but promoted as a positive good and "godly".

By the mid and late 1970s, leading homosexualist gnostic theoreticians began to increase their output and publish their gnostic ideas for the secret advancement of homosexuality, and its acceptance by the masses in the future. The writings of John McNeill S.J., quickly formed the basis of the gnostic ideology of the dissident group, "Dignity".  Along with the Dominican priest, Donald J Goergen, and his landmark 1974, book, "The Sexual Celibate", (in which he also denied the Virgin Birth), other prominent figures emerged as contributors to this occult-driven, homoerotic "religion". Richard Woods, Gareth Moore, Adriano Oliva are but three names that can be mentioned who have contributed over the decades to the development of homoerotic "theology".

This "theological" evolution of homoeroticism would eventually proclaim that Christianity in general, and Catholicism in particular, is not only positive towards homosexual experiences, but that Our Lord, and His Sacraments are actually gay-positive, they are "queer".  Indeed, this new, false religion even has its own "saints", such as Harvey Milk.

As I wrote in my previous post, Andy Buechel, who teaches at the Jesuit-run, Xavier University in Cincinnati, explains this homosexual, gnostic "christ" in this way:

The superior caste homosexual, according to this gnostic interpretation, is not limited, but with this "queer" so-called Christ, through an homoerotic encounter with him draws near to the divine. This is very similar to the "sex magick" of Crowley, but worse. Whereas, Crowley rejected openly Christianity, these homoerotic theologians continue to use Christian terminology, showing they really are under diabolical influence.

Thus, "queering" theologians do not argue that homosexuality is just an alternate lifestyle, they argue that it is superior, sacred, holy and participating in the Divine life of what they call "god". Thus, homosexuals are the new "supermen", the ones with the special, gnostic insight and link with the "divine" through occult homosexual practices. In all of this, we can see the dark involvement of Lucifer. It is in fact, an encounter with the Evil One, under the guise of "light".


In what was his final book, "Memory and Identity", Pope John Paul II in the chapter entitled "Ideologies of Evil" includes the promotion of "homosexual unions" (p.13) as "another ideology of evil, more subtle and hidden, perhaps, intent upon exploiting human rights themselves against man and against the family".

"Why does this happen? What is the root of these post-Enlightenment ideologies? The answer is simple: it happens because of the rejection of God qua Creator, and consequently qua source determining what is good and what is evil" (p.13).

There are some homosexuals who are purely demonic - an inner circle -  who delight in perversion, sadism, and the diabolical. There are some who are spreading this evil, gnostic homoerotic perversion in the Church because they hate Christ and His Church. To refuse to repent, confess and ask for mercy is to blaspheme against the Holy Spirit. God will be their judge.

There are others who have been abused as children, young boys, teenagers - let us therefore recall the admonition of Mgr. Foy that "among the evil fruits of this decadent age there is an unparalleled betrayal of homosexuals".

To conclude with the words of Mgr. Foy, that God's Grace move the homosexuals to conversion, even those under near complete diabolical control:

To all homosexuals we say: Peace, Hope, and Joy in your daily pursuit of chastity and holiness. God be with you! May you always keep in your hearts the words of St. Paul, “You are not called to immorality but to holiness.”

It is Christless, immoral, self-loving and highly organised.
Its hierarchy and priests are cunning, determined, shameless and media-savvy.
They have in Francis their crowd-pleasing pope.
They espouse what I would call 'Sex And The City' theology.
No wonder they are feted by Hollywood and the liberal media.

The Church is in the worst crisis since Athanasius did battle with the Arians.
We pray and wait for an Athanasius to emerge.
A priest or layman who is so afraid of God that he has no fear of men.

These are principalities and powers, we can only pray and fight it where we can and must. The signs of capitulation to the homosexuals are already there however. When people abandon their children to this, even introduce them to it, then what can we say about that. I would never allow my child to be taught this evil in school, but how many do just that. They have allowed their children to be indoctrinated into evil, and many parents encourage that acceptance themselves. Truly we are an evil generation! God, have pity on us!

As a post-script, here is Rebel Media's homo manifesto:

Whatever they conserve, it is not their immortal souls.

LGBTory has more or less already swallowed the so-called "Con"servative Party of Canada. They no doubt are "con"cerned about keeping taxes low for wealthy homosexuals, but taxation has nothing to do with what one may or may not be conserving. Rebel Media, run by a Jew who seemingly has lost any belief in the God of ABraham, Issac and Jacob, is merely a diversion that will only lend to the disorder in society. Rebel Media - just like the leftists they allegedly oppose - does not want Jesus Christ to reign over Canada, or any other nation. Thus, without a return to Our Lord, society is doomed to collapse. Pope Leo XIII told Catholics how to live lives in an increasingly paganized world: "Redouble your prayers so that God might be with you in a greater abundance of grace, fighting and triumphing with you. Accompany your prayers with the practice of the Christian virtues, especially charity toward the needy. Seek God’s mercies with humility and perseverance, renewing every day the promises of your baptism".