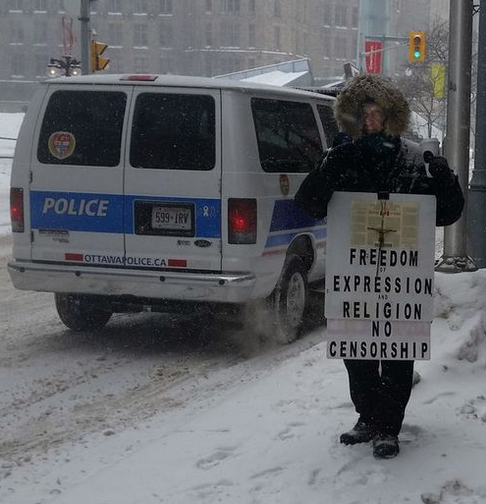 On February 1st, freedom of speech died in Canada. On that day the "Safe Access to Abortion Services Act" became law in Ontario.

This law makes it a crime to express any form of disapproval to abortion (in writing, in word, etc.) within 50 meters of any facility that provides abortion, or abortion related services (e.g. hospital, private abortion clinic, pharmacy). The law explicitly states it is a crime to “perform or attempt to perform an act of disapproval” against abortion.

A first time offender can now receive six months in jail and a fine of $5000. The new law has a clause that permits the abortionist to apply to the courts to have the 50 meter zone extended to 150 meters.

Ontario has already had its first victim: a brave man who was arrested in Ottawa. Sadly, our "freedom" loving Press and the authorities have refused to release his name.

Now a couple of VERY SERIOUS questions for our PC Party Leadership hopefuls:

How is it possible that we have gone through an entire PC Leadership campaign without this very, very serious attack upon freedom of speech being mentioned?

How is it possible that not once were the already existing injunctions that abortion clinics already have in place against peaceful protest not mentioned as a grave violation of freedom of speech and expression by our PC Candidates?

BEFORE YOU VOTE, call, email your PC Leadership candidate. Ask him or her why they have been SILENT about the abortion gag-law. if they tell you they are against the gag, ask them then why have they been silent about it? A citizen has been charged: do they not have eyes to see, ears to hear?

Tell them, that silence means consent or cowardice. If you do NOT get a reply that you an trust, then I advise you to do the right thing, and abstain from voting. Do not sully your soul for pottage.

Remember friends - just as with your bishop - it is not what the politicians says that ultimately matters, it is what they do. Words are very easy: it is action that truly shows character.


UPDATE: As of Friday, March 23rd, 2018 this blog no longer endorses, supports the political campaign of Tanya Granic Allen. She became a politician, when, on March 5th, 2018, in reply to the question from a Global News Reporter:"Is homosexuality a sin", her reply (clever politically) was :"this is not germane to the conversation".  Our Lord tells us: "si, si, no, no". The reply should have been:"This question is not germane to the topic, but you know I am a Catholic, and you know that we Catholics regard homosexual acts as sinful. So, why do you ask?". Another serious problem is her Twitter links to Croatian extremist nationalists. This is a very serious problem, that deserves a serious reply. We are in Canada, not in Europe. We do not need these ancient blood feuds brought over here.
Posted by Barona at 09:40