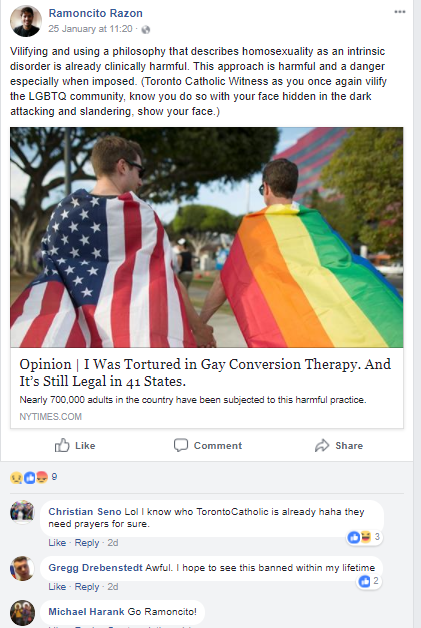 Ramoncito Razon OFM of Holy Name Province, opposes the teaching of the Catholic Church. The above screenshot shows him, and others, mocking the Church's teachings that homosexuality is "intrinsically disordered" [CCC:2357], Razon and his associates seem to need reminding that "homosexual practices" [CCC:2396] are grave sins in violation of chastity [CCC:2358]. Are they not taught that by the priests of the Franciscan Holy Name Province?

What should the Franciscans be teaching? They should be teaching the Mind of Christ, and not wandering off into the evils of "gay culture". In 1986, the Congregation of the Doctrine of the Faith under St. Pope John Paul II, published a Letter regarding pastoral care for those suffering from same-sex attraction. The future, Pope Benedict XVI wrote:

Therefore special concern and pastoral attention should be directed toward those who have this condition, lest they be led to believe that the living out of this orientation in homosexual activity is a morally acceptable option. It is not...

...It is only in the marital relationship that the use of the sexual faculty can be morally good. A person engaging in homosexual behaviour therefore acts immorally...

To my knowledge, not once have any of these Franciscans written about the need for those with same-sex attraction to remain chaste. Fr. Z carries an excellent review of the life of Andy Warhol, who, though openly homosexual, strived to live chastely. Fr. Z also wrote one of the best articles I have ever read on homosexuality, the "queering of the Church", and how Catholics must reach out to those suffering from same-sex attraction. I cannot recommend this article enough. Please read it very carefully, here.

Against this overview of the homosexualist movement within the Church, let us also once again review what the Popes have taught regarding admitting homosexuals, or those who promote the homosexual agenda into religious life, given we are discussing Franciscan postulants, who are promoters of "gay culture".

In 2005, the Congregation of Catholic Education under Pope Benedict XVI, published an Instruction regarding those in seminaries who were practicing homosexuals, or men who suffered from same-sex attraction, or men who - for whatever reason - supported "gay-culture".

In the light of such teaching, this Dicastery, in accord with the Congregation for Divine Worship and the Discipline of the Sacraments, believes it necessary to state clearly that the Church, while profoundly respecting the persons in question, cannot admit to the seminary or to holy orders those who practise homosexuality, present deep-seated homosexual tendencies or support the so-called "gay culture."

"Gay-culture" is a very interesting ideological concept. Those in Holy Name Province, who promote this "gay-culture", reject the Catechism, and as such, are not acceptable for ordination to the sacred priesthood. Any ordination - if, the form is followed and the ordaining bishop does not tamper with words - would be valid, but it certainly would be illicit.

Razon, and another Franciscan -  Christian Seno, OFM - came to my attention last year, due to their vicious Facebook exchange about, Courage,  the pro-chastity Church-approved organization for persons suffering from same-sex attraction. It should be noted that when this exchange was uncovered, they scrubbed it from Facebook. However, too little, too late.

Following this bizarre tirade against the wonderful "authentic pastoral programme" of Courage, I then delved into the dark, pro "LGBT" world of Holy Name Province.

What I found was deeply troubling. I have since then written a number of posts on the dissenting militant homosexualism of Holy Name Province.

Without repenting, Razon, Seno and especially those older Franciscans who encourage them, lie to them about the Church's beautiful teaching on chastity,  stand in danger of going to Hell. They - and other Franciscans of Holy Name Province should (even if they will not change) cease misleading others who suffer from same-sex attraction. Catholics must ensure that those suffering from same-sex attraction see the beauty of the Church's call for an "authentic pastoral programme" for those suffering this disorder.

To conclude with the words of Fr Z:


Charity always seeks to the true good of the other, to the point of sacrificing one’s own preferences, or even life. To engage in homosexual acts isn’t love. It is a violation of friendship, not a sign of friendship, because it causes a friend to commit a sin that separates them from the love of God.


Please pray for those suffering from same-sex attraction.

St. Charles Lwanga, pray for them.
Posted by Barona at 17:45

Email ThisBlogThis!Share to TwitterShare to FacebookShare to Pinterest
Labels: Crisis in the Church, Franciscans and Homosexuality, Homosexuality

A brown habit does not a Franciscan make. A disgrace and travesty.