Dan P. Horan OFM, is a nasty, vicious dissenter. A jet-setting, semi-professional marathoner (a very expensive undertaking for anyone who knows this sport), book writer and traveling public speaker, Horan does not live evangelical poverty, making a mockery of the true Franciscan life.

As an advocate for homosexual perversion, Horan has distinguished himself by promoting the "gay culture". Horan now refers to Holy Matrimony as "different-sex marriage". This is just how evil he is: comparing homosexual acts to the holy Act proper to the Union between husband and wife, willed by Christ.

When asked why he puts up photos of practicing homosexuals holding hands, Horan mocks the questioner with the ridiculous smear of "homophobia".

Horan belongs to the homosexual-infested, US east-coast based, Holy Name Province, which has a long history of militant pro-homosexual dissent. The "friars" who run St. Francis of Assisi parish in NYC are particularly virulent in their promotion of homosexuality. Similar "LGBT" agitprop locations are in Boston and Hartford. If these so-called Franciscans are not decorating their churches in "rainbow" colours of the so-called "gay liberation movement"...

...they are busy waving the "Rainbow Flag", accepting postulants who have written "gay" literature, sending their parishioners to notorious gay bars, and so on. For further information on the homosexual infiltration of Holy Name Province, please read here.

It is within this evil and satanic environment, that Horan has just attacked the Real Presence in the Most Holy Eucharist. You should not be surprised.

Friends, please recall the words of Fr. John O'Connor from nearly thirty years ago: "these homos despise our religion".

Homosexuals entered the priesthood to destroy the Catholic Faith. Striking at the Eucharist and Catholic Morality (especially by promoting the "gay liberation movement") is at the core of their hatred of Christ and His Church. 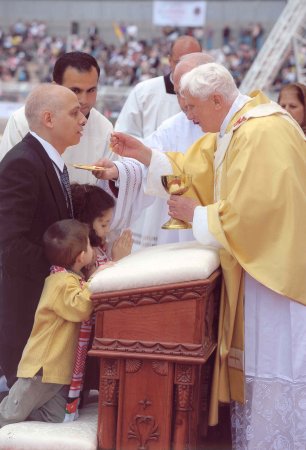 Email ThisBlogThis!Share to TwitterShare to FacebookShare to Pinterest
Labels: Franciscans and Homosexuality

If I ever had any doubt that we all most definitely SHOULD be kneeling for communion on the tongue, he has removed it by that snarky remark.

Of course this man will, like all sodomites, desecrate the Holy Eucharist, Sacraments & Catholic Doctrine. It is their way of dealing with the huge sense of guilt they endure by not accepting the dire necessity of leaving a grievously sinful way of life & submit themselves to Christ Our Saviour. The Franciscan Order is responsible before God to censure this man & others like him who betray the OHC&A Church of God on earth & this must make the great St. Francis of Assisi & St. Anthony of Padua reel in the Heavens.

Another good post exposing these disgusting rats. They are leading many souls to perdition as they twist and contort the Catholic Faith. Homosexual actions are wrong and anyone that promotes them or a sinful lifestyle is complicit in this destruction of family and morals.
Keep up the good work. We are praying for you!

Horan uses the word “bread” to describe the Eucharist consecrated by Christ Himself . Enough said . Pray for his conversion.

Why on earth would you feel it asked her to apologize to this evil acting man. You have nothing to be afraid of nothing to be ashamed of you spoke the truth about this man .