The men who run the Vatican City State are doubling down on their betrayal of the Catholic Church in China - indeed, their betrayal of all of China. Do not Chinese people have a God-given right to live in true freedom, befitting children of God?

Permit me to introduce to you Fr. Michael Kelly, S.J. 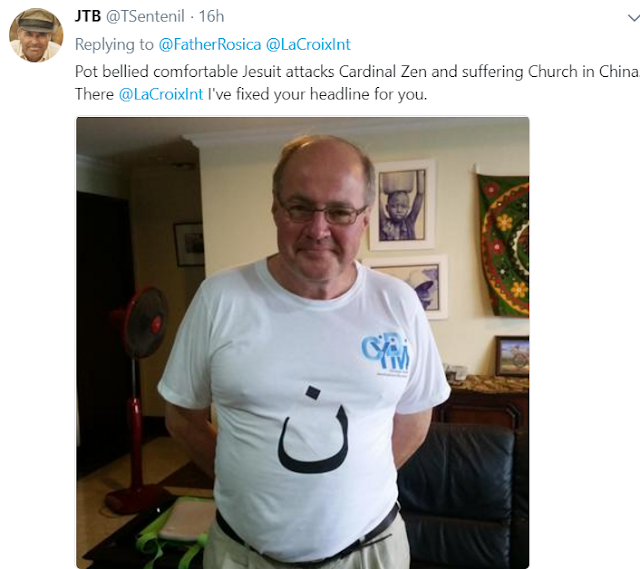 Fr. Michael Kelly S.J., takes issue with Cardinal Zen. In an article published in the modernist, La Croix, Kelly proceeds to malign and insult, the saintly Prelate behind a mask of twisted and not comparable historical situations.

Cardinal Zen not only needs to read a bit more history. He also needs to turn the emotional volume down. His “cops and robbers” narrative that he shouts at everyone who doesn’t agree with him – this writer included – does little more than encourage anyone listening to walk away from him.
Whatever he thinks he’s doing for the people he sees himself supporting, he isn’t doing them any good with his approach. The value of what he might contribute is lost in his hysterical outbursts against those he accuses of being evil.
It’s some claim to be speaking for half the Catholics in China when he has no actual evidence to support the assertion about people living in a country he hasn’t visited in over 20 years. Moralize all you like, but Cardinal Zen offers no path forward.

It is impossible that this hateful tirade against a senior Cardinal of the Catholic Church was not approved by Cardinal Parolin, the mastermind behind this sellout to Fascist-Bolshevism. As Parolin's pawn, Kelly trots out the difficulties that Catholic Church had with various States over the centuries. However, he conveniently forgets that when past popes were compromising with States, they were NOT approving of State promoted bishops who were schismatics, and tools of an atheistic tyranny. A HUGE difference.

It is also incredible that Kelly is able to denounce in one breath the corrupt Alexander VI for his actions, yet defend the actions of the betrayal of the Catholic Church in China into the hands of the Red Terror. I might add, that for all of Alexander's grave sins, one of them was NOT betraying the Catholic Church into the hands of schismatics, controlled by a vicious totalitarian regime that murdered tens of millions of its citizens, and tortured and enslaved Catholics. This betrayal will go down in history as one of the most horrible attack on the Mystical Body of Christ.

Kelly focuses his personal, spiteful attacks upon the long-suffering Cardinal Zen. Kelly even seems to question the evil of the Red Terror that runs China. He accuses Cardinal Zen of "hysterical outbursts against those he considers evil". Is Kelly implying the Cardinal is wrong, is Kelly implying the regime in China is not evil? It would seem so.

Finally, if a Pope committed an error or sinned in the past, are we to exonerate and whitewash a Pope in the present committing error and sinning? What kind of reasoning is this? Instead of condemning the cruel, un-Christian article, written to malign the saintly Chinese Prelate, Vatican stooge, Thomas Rosica, CSB has seen fit to re-tweet it. Disgusting and shameful, but sadly, not surprising. Pray for these deluded churchmen.

Truly, long-suffering Chinese Catholics are the glory of the Church. Now, they are being crucified again by the very men who should be defending Christ and His Church.

As the Roman churchmen up their attacks upon Cardinal Zen, he joins Cardinal Mindszenty and Cardinal Slipyj who were also betrayed by the hands of sinful men. Great will be his reward in Heaven.

For the full truth, please read the words of Cardinal Zen himself. You, dear readers, decide.

Dear readers, please visit the Cardinal Kung Foundation for more truth as to what is going on in China.
Posted by Barona at 12:26

Email ThisBlogThis!Share to TwitterShare to FacebookShare to Pinterest
Labels: Crisis in the Church, The Persecuted Church, Vatican News

Just like the sodomite pedophile perverts (never say a word about muslims sodomizing children) to make a deal w/Chinese who murder 1500 babies in the womb an hour, tear crosses off churches, demolish churches and forbid children to attend.

They sure are practicing the VC2 social doctrine:
http://www.telegraph.co.uk/news/worldnews/europe/vaticancityandholysee/6670813/Vatican-condemns-immoral-church-conversions.html

Cardinal Zen can echo the words of the prophet: "These wounds I received in the house of my friends".

Matthew 6:24 "No one can serve two masters; for either he will hate the one and love the other, or he will be devoted to the one and despise the other. You cannot serve God and mammon."