Christmas: The triumph of sentiment over faith

If other ages felt less, they saw more, even though they saw more, even though they saw with the blind, prophetical, unsentimental eye of acceptance, which is to say, of faith. In the absence of this faith now, we govern by tenderness. It is tenderness which, long since cut off from the person of Christ is wrapped in theory. When tenderness is detached from the source of tenderness, its logical outcome is terror. It ends in forced-labor camps and in the fumes of the gas chamber.   Flannery O'Connor

I am sitting here awash in the spirit of Christmas with its cheap, tawdry sentiment and crass commercialism. I have done my best to avoid the excesses of the season and the shopping frenzy leading up to December 25. My Christmas presents consist of things found around the house, not store bought. However this tinsel garbed, gaily decorated demon is not so easy to avoid. For some this season is far more of a trial to be borne than any sort of celebration.

One of the unavoidable bits of Christmas this year was the showing of A Christmas Carol in our recreation room on Christmas eve. It was the Alistair Sim version, which in my opinion is the best. While Barona sees in Dickens' story a condemnation of the "voracious capitalist spirit that roams the world seeking the ruin of souls", I saw something different. The book was written in 1843 and the remarkable thing about it is that it presents us with a fairly secular view of Christmas. There is scarcely any mention of Jesus Christ beyond a few traditional carols.

Those of you who are decrying the perversion of Christmas into a celebration of greed and commercialism can look back to this vision of Victorian England to see the seeds of its demise. This celebration of sentiment without the reason for the sentiment is what has led to the crass commercialism of today. Christmas is the commemoration of the event wherein heaven touched earth in the person of Jesus Christ. He is the lynchpin of the entire thing without whom it begins to fall apart. God became man, dwelt among us and offered Himself for us. If that is not enough to change a man's life and soften his heart then I doubt any Dickensian sentiment will do the trick. 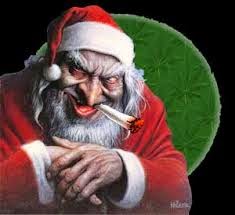 Any spirit of Christmas which casts us in the role of consumers and users ought to be exorcised and banished to whatever hell is reserved for those who have lost touch with the facts of their existence, perhaps alongside the spirit of Vatican 2. We are far more than that. We are the ones for whom God became Man, for whom the Word became flesh. We are persons beloved of Him who came for us, not mere lumps of flesh to be used and disposed of.

Merry Christmas
Posted by Freyr at 13:23

Apparently there are more allusions to Christianity in the novella than a few carols.... however, as with Tolkien what Christianity there is has long been excised, ignored, misunderstood by a virtually de-Christianized readership.

Alas, de facto, A Christmas Carol, probably not Dickens' intent, has ended up serving the secularist takeover of Christmas - handed to them on a platter by nominal Christians (the spiritual forefathers of the "Christians" who created the Canada in which a young woman can be jailed for opposing in most loving and peaceful way, the killing of human life in the womb). There is a link between sentimentality and the dehumanization of the person.