Toronto's "Gay Pride Parade": The Case of the Missing Million

ONE MILLION. OVER ONE MILLION.... So it goes each year. It began well over ten or so years ago, that the media (fanatically pro-homosexual), began reporting "500,000" were in attendance at the "gay pride parade". The next year, dutifully we would be told "600,000", then "700,000". According to the very honest media, all of Toronto just wants to turn up at the "gay pride parade".

And so it went, year after year, after year. Lie after lie, after lie. With the alleged number going up and up... I think the highest they ever dared was 1.1 MILLION a few years back. After the voices questioning it could no longer be silenced with the usual smears of "homophobia", with the numbers becoming increasingly preposterous, the media began to tone it down and smudge it all over with vague "hundreds of thousands", "tens of thousands", "difficult to count the numbers"...etc. "Toronto Pride", on its official website continues to perpetuate the big lie with "from the corner of Church St and Bloor St all the way down Yonge St to Yonge-Dundas Square, tell your stories to a crowd of over one million festival goes..." A million? Over one million?  Don't count on it (no pun intended).

Facts are facts. Let us now review the "parade" route and see how many people can actually fit into the area. To more than compensate for crowd spillage into side streets and intersections, I included as crowd space the area that is used by floats, trucks, as well as all of Charles Street from Church to Yonge (that adds at least another 10,000).

Now, let us review this "one million" crowd, jammed into a 2 km space!

Let us move on to three people per meter:

Let us now review what three people per meter looks like. Quite dense, isn't it? 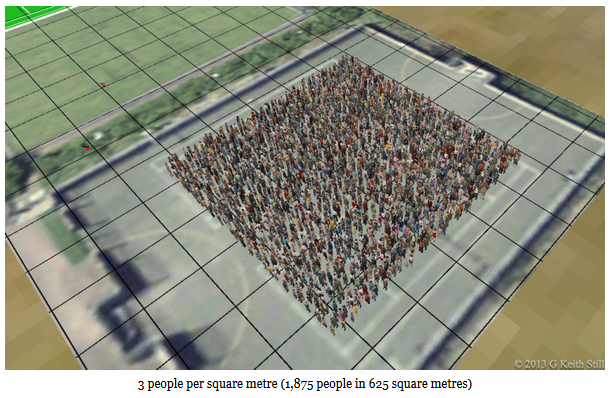 Let us conclude with four people per meter:

So there we have it:  very dense is just under 80,000 (and remember, I have included the open areas, floats, etc., as well as crowd gaps in my calculations to maximize crowd size).

Let us now see what four people per meter look like:

My dear friends, The Case of the Missing Million is solved: they were never there. Just another, big, big lie. Didn't Hitler himself say: if you are going to tell a lie tell a big one?

Please do not forget to pray for the conversion of homosexuals. They desperately need our prayers.
Posted by Barona at 17:07