LGBTory: When a Catholic stands up to Jason Kenney ! 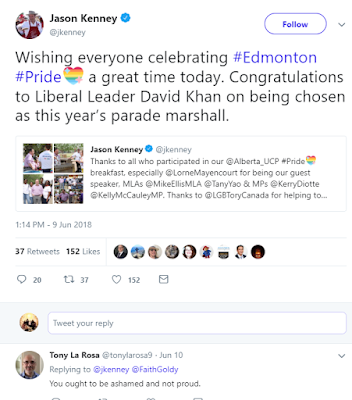 Tony took the right action. Did you?

Have you spoken up for Christ the King?

Jason Kenney is but one more politician, who has sold his soul to the militant homosexual lobby for a few miserable votes. LGBTory is a viciously powerful and militant organization that has a virtual stranglehold on the nominally "Conservative Party of Canada", and other provincial "Conservative" Parties.

Behold the tragedy of a man who is selling his soul - FOR NOTHING !!!!

God bless you Tony for standing up to Kenney!


Catholics, will you stand with Tony?


Canada is in free fall. We have free standing infanticide (abortion), up to actual birth, the glorification of suicide through "euthanasia", the killing of the "brain dead", wide spread promotion and glorification of homosexuality, gender ideology and pornography. We have the corruption of innocence by State funded promotion of sexual perversion on children, which is child abuse.

We have a not so subtle attack on the Catholic Church in particular and Christianity in general. Our country is NOT "glorious and free".... our country is a slave of brutal lust and greed, slave of sin.

If you have not discarded your "Conservative" Party membership card - what are you waiting for? Get real friends: wake up! years ago a wise Polish friend of mine told me Canada lived under "fascism in white gloves". Well, he was right!

Dear friends, please pray for Jason Kenny that he return to the Faith.

Please pray for Tony that God bless him for defending Our Lord and the Christian family.

More to come on LGBTory, Doug Ford and the Ontario Betrayal on Sex-Ed.
Posted by Barona at 19:13