Fr. Frank Pavone has devoted his priestly life to fighting the scourge of our times: the satanic ritual of the murder of unborn babies in their mothers' wombs. Unborn babies Thomas Rosica : NOT a "fetus"!!!

Vox Cantoris rightly calls out the nauseating Bishop of Amarillo who intends to launch a witch hunt against Fr. Pavone.

And now what do we have? The CEO of Salt and Light Media, Thomas Rosica, attacking this saintly man on Twitter.

How utterly vile, hateful and contemptible.

Has Rosica nothing to talk or write about, except attack a Catholic priest in the United States? 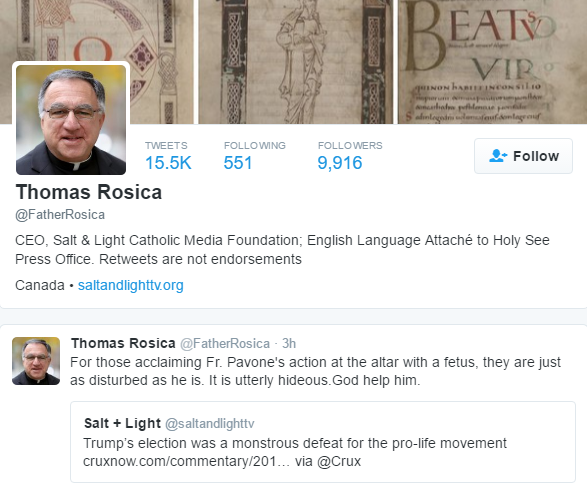 To add to this vicious attack on Fr. Pavone as "disturbed", he suggests - via his Salt and Light outfit - we read an article written by a professor from the neo-Modernist, Jesuit controlled, Fordham University. The article - no surprise here - is devoted to attacking President-Elect Donald Trump as a "monstrous defeat" for the pro-life movement. For more on the dissenter, Camosy, please read here.

Not ONE WORD about the EVIL Hillary Clinton. Not one word from this loathsome Fordham professor as to what would have become of the Little SIsters of the Poor had Clinton taken the White House. Yet this is the type of pro-Democrat rubbish that Rosica, Edward Beck, James Martin, Matt Malone and the neo-modernist establishment promote. My there must have been wailing and gnashing  of teeth when "their girl" was rejected by millions of common sense American "peasants" and "workers".

Rosica - does he need to be reminded - lives in Canada. The Church in Canada is disintegrating: has he ever considered the number of Catholics who support abortion, contraception, excuse unnatural sexual vice or minimize it, support the horror of "same-sex marriage",  or even just engage in solitary self-abuse?

Thomas Rosica, CSB, you owe Fr. Pavone an apology.
Posted by Barona at 14:43

When considering people in academia and the media, one must be mindful of the CIA and Operation Mockingbird. Catholic are becoming increasingly aware that we've been infiltrated and that provocateurs are pushing ideologies and inflaming divisions. The old story of communist infiltration of the Church is less half of the truth. Conservatives and liberals both need to be vigilant and watchful of their "leaders".

and to all of us

If the Church doesn't work to combat and evangelize about the evils of abortion, euthanasia, radical sex "education" programs in schools, pornography, "gender fluidity" and others, the pews will continue to empty. The Church will be another comfortable and complacent social club. It becomes an irrelevant Church. When it comes to the faithful as a group, I would rather be on the "distubed" side that supports Fr. Pavone.