Reverse Papolatry: how some Traditionalists have focused on the Pope rather than Our Lord 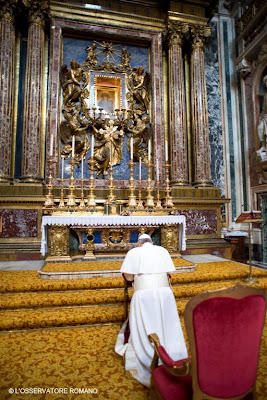 "Whoever committeth sin, is the slave of sin" John 8:34


Pope Francis needs our prayers, not our hate, anger, rage. We have had weak, bad even evil popes before. The Church survived. Why? Because Christ is the Head of the Church, not a man. Christ has triumphed.

The Providence of God saw to enshrine in the First Vatican Council that the Supreme Pontiff actually has very little powers. He is not some arbitrary figure who may make up doctrine on a whim. To lament and rage over utterances of the Holy Father gives to him far, far more power than he ever had: it is a form of reverse papolatry. Eventually, the only sick logic of this is sedevacantism, or unbelief. The Pope is a liberal, but is infallible; ergo I must be a liberal. Or, the Pope is liberal, but is infallible, ergo he is not Pope. This is madness.

We do not know if the selection of Haring for praise was the Pope's or his advisors. In a sense, it does not matter. The men whom Pope Francis has surrounded himself are not giving good advise, nor have been giving good advise for some time.

The proper reaction from Catholics to the confusion coming from Rome should not be anger, hatred, vulgarity, moral relativism etc. When Catholics calling themselves "traditional" do not understand that sin is sin, that it is black and white, then we have a serious problem: it is called moral relativism and it comes from being imbued with the poison of liberalism.

These are all signs of the Enemy and not the Holy Spirit.
There are a few voices of soundness, of calm who are speaking up. Cardinal Burke and Bishop Schneider are two exemplary voices in the hierarchy, but not the only ones. Notwithstanding, when Cardinal Burke did not commit episcopal "suicide" by denouncing the Pope within a few hours of the publication of Amoris Laetitia (and hence effectively removing himself from defending the truth), his voice is a voice of Catholic clarity proclaiming the truth in charity amongst the din of hatred.

When a mere man, the Pope in Rome, has become the centre of attention, the focus of hate, - not prayer - we have a serious problem. When Our Lord, who should be our focus, is a mere afterthought, we have an even bigger problem.

The Pope in Rome needs out prayers and sacrifices. We need to increase our prayers, and decrease our "noise".

"It is easy to see what effects proceed from corrupt nature; they are such things as...feuds, quarrels, jealousies, outbursts of anger, rivalries, dissensions, factions, spite... I warn you, as I have warned you before, that those who live in such a way will not inherit God’s kingdom. Whereas the spirit yields a harvest of love, joy, peace, patience, kindness, generosity, forbearance, gentleness, faith, courtesy, temperateness, purity".
Galatians, 5, 19-23
Posted by Barona at 17:55

If we were to have a pope that satisfied the desires of Traditionalists, he would likely end up like Pope John Paul I. We must address the curia that has become a snake pit and ensure that a good pope lives more than a month. Francis can't face the homo mafia/fascisti alone. The Church needs to be cleansed from the bottom to the top. The rot at the top didn't come about in a vacuum.

Irony Alert: "When Catholics calling themselves "traditional" do not understand that sin is sin, that it is black and white, then we have a serious problem: it is called moral relativism and it comes from being imbued with the poison of liberalism."

In days of yore, by the time the villagers heard the pope's heretical statements, that pope was probably long gone. Today, the pope tweets, and in seconds it is around the globe. Different thing entirely. Every single thing he says matters, as it does the masons and sodomites with which he has surrounded himself.

Barona,
Thank you for writing a most courageous post during our time of "living on the Internet." Our Lord knows our souls, our hearts and our human nature.
Praying for those we do not like , even hate, seems to elude us.

This is something with which I have a problem. Your post has inspired me to hold my tongue now and utter a prayer when I truly want to lash out at Francis and clergy like him.

We must however, still employ fraternal correction.It must always been done in charity, shored up with much prayer and mortification.

I have heard you say, "sometimes we get the Pope we deserve instead of the Pope we need." We have no one to blame for this mess but ourselves.

Keep writing, you are listening to the "still,small voice of God" in your soul and your heart .

St John of the Cross, pray for us.