The Bishop of Rome commits calumny against Christ and His Church 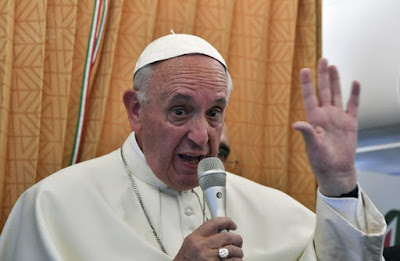 Francis, the Bishop of Rome has either lost his mind or is an evil malefactor. There is no alternative. Today, during the inflight Press Conference, Francis had this to say:

"[The Church] shouldn’t just apologize to a gay [sic] person whom it has offended,” he said. 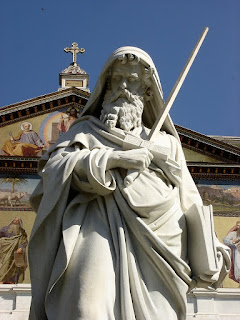 How can a Pope say such things? Is he not thinking? Is he unaware of the incredible damage he has created? The enemies of Christ will seize upon these remarks that claim that the Church has amongst other things abused the poor, exploited women... In fact, he and his fellow clergy have committed these sins by not teaching what Christ taught with clarity and unambiguity.

Much has already been written on the alleged need for an "apology" to those who engage in sodomy and other unnatural vice. We wish, in this post, to draw attention to Francis' outrageous undermining of Catholic teaching on Holy Matrimony, as expressed by St. Paul. We wish to address the issue of "exploited women". How can a Catholic, let alone a Pope claim that the Church is responsible for the exploitation of women and should apologize? This is calumny against Christ and His Apostles and the Church Fathers. 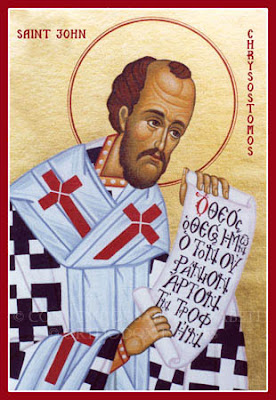 Wives, be in subjection to your husbands, as is fitting in the Lord. Husbands, love your wives, and be not bitter against them.

St. John Chrysostom, in his 10th Homily on Colossians (in a work which Francis obviously has not read) wrote the following commentary:


Ver. 18. Wives, be in subjection to your husbands, as is fitting in the Lord.


That is, be subject for God's sake, because this adorns you, he says, not them. For I mean not that subjection which is due to a master, nor yet that alone which is of nature, but that for God's sake.


Ver. 19. Husbands, love your wives, and be not bitter against them.

See how again he has exhorted to reciprocity. As in the other case he enjoins fear and love, so also does he here. For it is possible for one who loves even, to be bitter. What he says then is this. Fight not; for nothing is more bitter than this fighting, when it takes place on the part of the husband toward the wife. For the fightings which happen between beloved persons, these are bitter; and he shows that it arises from great bitterness, when, says he, any one is at variance with his own member. To love therefore is the husband's part, to yield pertains to the other side. If then each one contributes his own part, all stands firm. From being loved, the wife too becomes loving; and from her being submissive, the husband becomes yielding.

So much indeed for the exploitation of women. The Church should apologize to women for defending them? For proclaiming the beautiful doctrine of Holy Matrimony which raised women up from being chattel in the ancient world? That the teaching of Christ and His Church are wrong?

Perhaps it is Popes and churchmen who have failed Christ and His Church? Stop blaming the Faithful! They should apologize for their grave failings and for this profane litany that Francis has concocted.

If they want to apologize, perhaps they should apologize for the priests who have raped little boys and girls, and to the Faithful who have paid the exorbitant recompense of billions of dollars that could have been used for the poor that we hear so much about coming from Rome. Apologize for the billions wasted on their sins and crimes! Yes, we are waiting for an apology to the sexually abused and the poor.

A late friend of ours once said: "no dogma, no dollars". If the Church is not going to teach dogma and doctrine, no money!

Co-written by Barona and Sofia (of www.alwayscatholic.com)
Posted by Barona at 21:33

An Open Letter to Cardinal Collins: KEEP THE CHURCHES OPEN FOR MASS !

Dear Cardinal Collins, I wrote to you twice last year, and I am still awaiting your reply. I presume you are far too busy with your accoun... 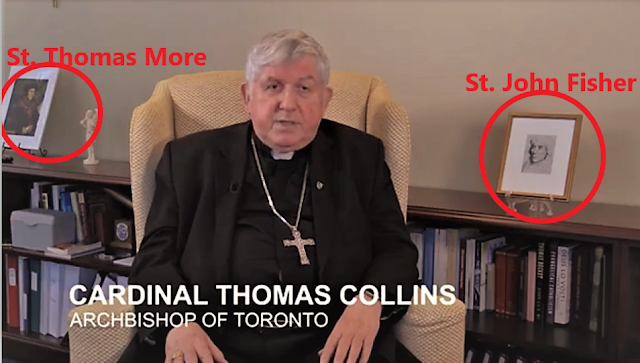