Jesuit Hubris: doctrine must evolve to fit with pastoral practice 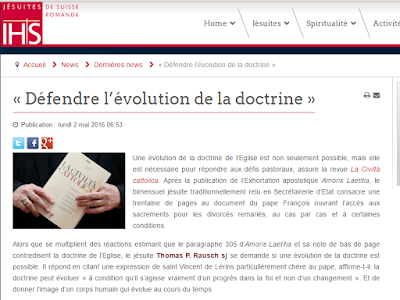 Antonio Spadaro S.J., a very close advisor and confidante of Pope Francis has just tweeted happily an article by the Jesuit heretic Thomas P Rausch that doctrine must change to match pastoral evolution. The boldness of these liars and deceivers is such that they are now dropping any pretext of the monstrous lie that "doctrine changes when pastoral contexts shift and new insights emerge..." to openly admit that doctrine must be re-formulated to fit pastoral practices. Vox Cantoris accurately predicted that these men always had one thing in mind, the changing of doctrine.

Now, we are informed in the neo-Modernist La Civilta Cattolica, that the "evolution of doctrine is not only possible, but necessary..." in response to pastoral situations. The Jesuit "De Suisse Romande" is emphatic: Amoris Laetitia opens the door for the divorced and "remarried" - in other words, ADULTERERS - to receive Holy Communion.

De Suisse Romande gives a highly favourable  review by the arch-Modernist Jesuit, Rausch, who proposes that paragraph 305 of Amoris Laetitia opens the way to "recontextualize" doctrine in the service of the "pastoral mission of the Church".

Such errors are not new, but as part of the doctrine of the Modernists were formally condemned by Pope St. Pius X. The holy Pope wrote:

These errors are being daily spread among the faithful. Lest they captivate the faithful's minds and corrupt the purity of their faith, His Holiness, Pius X, by Divine Providence, Pope, has decided that the chief errors should be noted and condemned by the Office of this Holy Roman and Universal Inquisition.

58. Truth is no more immutable than man himself, since it evolved with him, in him, and through him.

59. Christ did not teach a determined body of doctrine applicable to all times and all men, but rather inaugurated a religious movement adapted or to be adapted to different times and places.

63. The Church shows that she is incapable of effectively maintaining evangelical ethics since she obstinately clings to immutable doctrines which cannot be reconciled with modern progress.
Posted by Barona at 14:55

He must be dyslexic as it's the other way around. It is an affliction he should get attended.

Who do these clerics think they are? They obviously don't believe in Jesus Christ Son of God as they want to create an entirely different set of rules which completely ignore His Commandments & Sacraments. Do they really expect to win this war? Crazy, it that's the case!